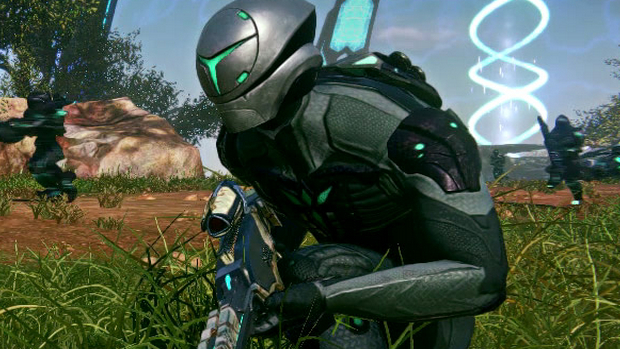 The wait for PlanetSide 2 on PS4, since delayed from early 2014, will end late 2014. Details from SOE Live 2014 remain similar to what we learned last SOE Live. PlanetSide 2 on PS4 is equivalent to the PC version on Ultra settings. It will remain completely free-to-play (no PlayStation Plus membership required). PS4 players will not be able to play with PC players.

The difference, I guess, is that it’s running on PS4 now. We were shown a live PS4 demo during a presentation from PlanetSide 2 senior art director Tramell Isaac, lead designer Luke Sigmund, and creative director Matt Higby, who explained, simply, that getting everything running on consoles well took some time.

In order to have other folks to play with for demo purposes, they actually were playing against PC players, which supports their emphasis on parity between versions: “we haven’t stripped anything from the PC version.” The problem is that, “on the PlayStation, we’re going to be on a different update cadence,” whereas “[they] determine when [they] patch to PC,” thanks to extra levels of QA from PlayStation. Instead of holding back PC updates for a few days (or, in possible circumstances, longer than a week), the team is leaving them separate for the time being. A future meld is possible, but not particularly likely.

That said, the game looked great running on the PS4 (and better than when I last played a year or so ago) and was running between 30 and 50 frames per second before optimization. There’s still no mini-map or store, but the loadout screens and other parts of the UI are complete. You can toggle aim assist off and on. The touch pad on the DualShock 4 will allow you to map certain commands to different areas (if you’ve gotten the hang of that giant button).

The PC version is also continuing to get new content, which will wind up in the PS4 version as well. A new four-man aircraft, the Valkyrie, has two seats for a dedicated pilot and gunner, two seats where players will be able to shoot whichever weapons they have on hand.

The team explained how it “needed to do more to encourage people to join squads and outfits,” and is adding squad mentoring and leadership awards, which confer benefits to outfits that pick up and level up new players. It could prove a helpful step, because the large scale combat is a bit overwhelming when you first dive it. On the other hand, they are working on “battle islands” for smaller affairs (say 40 on 40), with added objective play beyond captures, which could also help ease people into it.