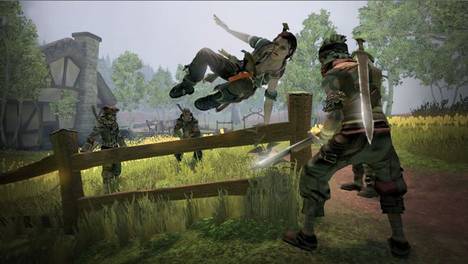 Like Gears of War 2, Fable 2 was only being demoed out to everyone in attendance at the Xbox 360 Showcase. Peter Molyneux is on hand and gives us a small preview of the game. He first goes into detail on the story of Fable 2. It’s Peter’s goal to make the story for the game one of the most dramatic stories ever told. The game starts off with an FMV cinematic sequence. The opening focuses on this cute little bird as he flies through the Fable 2 world.

“The thing about cut scenes is, they’re all very serious. They’re incredibly serious, these cutscenes and I really wanted to make a statement to that seriousness so we end our cutscene like this …” Peter says.

As the opening sequence closes out, the cute little bird takes a poop mid-flight, and the camera focuses on the poop as it falls towards the ground and onto the main protagonist’s head. More after the jump. 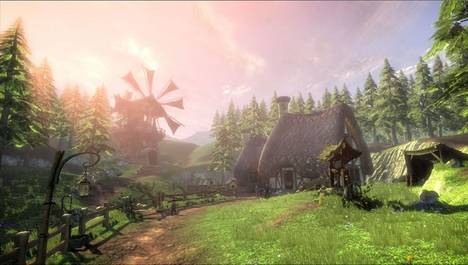 The main character you play as is a powerless, weak, street urchin living in the slums of the city with his older sister. Peter wants players to start off this way so they can feel what it’s like to be that hero as you go from a simple child to the world’s greatest hero. In order to do this, though, Peter has to tell the story in a very different way than in Fable 1: “I felt the story in Fable 1 was, well, rubbish.”

One of the new mechanics being introduced in Fable 2 gives you complete freedom in how you will get engaged in the story. The cutscenes are all in-game and fully interactive. You can walk away at any point in a cutscene or get completely involved. At any point, you can laugh at a person who is talking, which will change how the cutscene goes. Other options will include farting, hugging someone and more — all of which will change the scene you’re involved in.

So for instance, if someone comes up to you begging for help because their son got lost in the woods, you can actually hug that person to try and reassure them everything will be all right. Or, you can be a total dick and point and laugh at the person’s misery. And of course, you can always just kill that person. You have complete control over all these types of instances to react how you would like it to react.

Another new aspect to the game is the freedom to fully explore everything. A new system called the Breadcrumb Trail is shown off, and it essentially is like a GPS guide where you see a golden sparkly line appear on the ground showing you where you should go in the game to progress the story. The game will know if you like using the Breadcrumb Trail so if you use it a lot, it will stay very bright. However, if you wish to not use it, the trail will start to fade away until you can barely see it. You can also completely turn it off if you want.

The cities are filled with houses and locations, all of which are fully explorable. Once you’re tired of exploring and side quests, all you need to do is follow the Breadcrumb Trail back to your main quest. 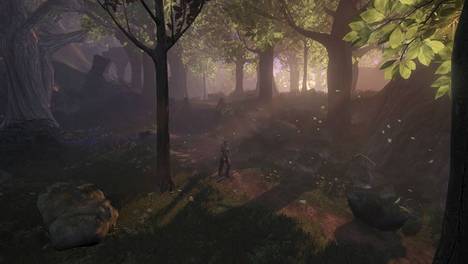 The quests will also have dramatic consequences for the cities you’re in. Peter gave this as an example: A guard has lost his warrants on five criminals. You can find the warrants for the guard so he can arrest the criminals, keeping that specific region happy and prosperous. Because the criminals were arrested, they never had a chance to develop and corrupt the region. If you’re feeling evil, though, you can always sell the warrants to the criminals themselves. This will cause that region to succumb to criminal organizations and dramatically change the region into a evil place.

At this point, the story is fast-forwarded a little and we’ve been asked not to spoil this next part as it’s a major spoiler. I can say that this final part of the game with you as a young child is a very dramatic scene and you will be shocked by some of the events that occur.

Several years have passed since the dramatic events that transpired, and this is where the game really starts. At this point, we’re shown the free-roaming aspect of the game in more detail again. You can go anywhere you want in this new region. Explore dungeons, go on side quests, whatever you want. The region is fully alive, too, and people will live out their lives. The camera leaves the main character and goes to this Gypsy camp that is nearby. The Gypsies are living out their lives, cooking, interacting with one another and so forth. There’s even a group of kids playing with each other, and they’re actually performing a play based on the first Fable.

Nothing is stopping you from going to this camp, winning over a lady from the camp, marrying her, banging her and having kids with her. The kids will share your traits and act good or bad, depending on you. You can move your family wherever you want to and eventually become the Gypsy master of the camp. It’s all up to you. 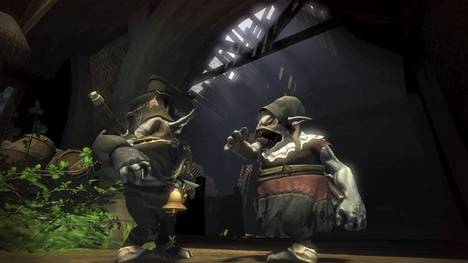 Next up, we’re shown the fighting system for the game. Fighting has been fine-tuned so core audiences and casual players can both play. The combat system is extremely simple now, yet it can also be very deep for advanced players. The X button will be used for swords and other similar weapons, Y will be used for guns and projectiles, and B is used for magic. Enemies are dropped into the location and we’re shown some of the fighting aspect. As you fight, you gain experience like any RPG and you can upgrade all of your attacks.

We’re also shown some of the co-op aspect here and players can drop in or out very easily. We’re shown this very briefly and Peter also hints that a big big BIG surprise is going to be revealed about the co-op soon.

Finally, we’re told about the money system in the game. The only way you can earn money now is by actually taking on jobs, such as becoming a blacksmith, bartender, woodsman, assassin and so forth. Another big twist is that there are some upcoming Xbox Live Arcade games where when you win money in the games; you can transfer that money over to Fable 2. Some of these games will be arriving before Fable 2 is out, so players could potentially have a huge amount of money as soon as they start Fable 2. There is about one hundred million dollars worth of stuff to buy in the game, so people shouldn’t have to worry about the balancing issue here.

All in all, I was impressed by what I saw but have a feeling that we’re still in a long wait for this to actually drop.