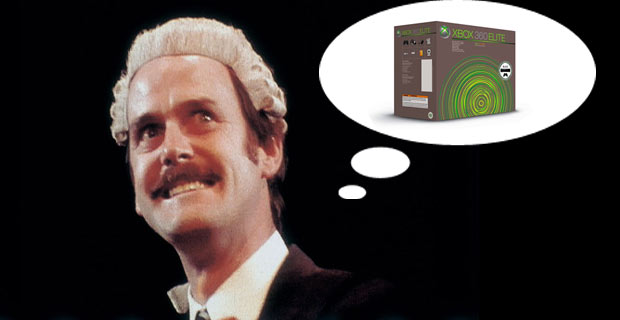 in the interest of not being complete jerks, Microsoft has seen fit to lower the price of an Xbox 360 Elite across the entirety of the United Kingdom. As of today, our friends in Great Britain can purchase a new system for the lowered price of £199.99, which is 30 pounds less than any poor sucker who bought one yesterday paid.

This will hopefully serve to take some of the sting out of the 360 Arcade’s recent nonsensical price hike, and now you can all join us in the little happy dance we’ve been doing in the US. Additionally, the 60gb Xbox 360 Pro is being completely phased out in the UK, so hereafter your options will be either “decent value” or “complete ripoff.”

You can read the otherwise thoroughly uninteresting press release detailing the price change after the jump.

The Best Value in Games and Entertainment; Xbox 360 Drops Elite Console Price across the UK
There has never been a better time to purchase an Xbox 360 with more games and entertainment at an even more affordable price

LONDON – 27 August 2009 — Xbox 360 today invites you to experience more fun, more entertainment and more ways to connect with friends and family at an even better value. From August 28th 2009 an Xbox 360 Elite console will be priced at only £199.99 estimated retail price (ERP). And with 120GB of storage, there’s plenty of room for your favourite games, movies and more from Xbox LIVE.

Xbox 360 puts all your entertainment in one place so you can play games, watch movies, listen to music and coming this Autumn, watch live TV via Sky Player, Sky’s Online TV service as well as being able to enjoy music with LastFM and be part of the social collective with your Twitter and Facebook, all from your Xbox 360.1 And, as announced earlier this year, the Xbox 360 bought today will work in the future with “Project Natal” the controller-free gaming experience.

“With the Christmas season right around the corner, it’s another opportunity to put the consumer centre stage with entertainment and games that everyone will enjoy,” said Neil Thompson, Senior Regional Director ,Entertainment and Devices Division, Microsoft UK and Ireland. “We have a goal over the next 18 months to deliver value with amazing content and rich interactive experiences in the living room.”
The new pricing structure provides choice, differentiation and value at both entry and premium levels with the new price point for Xbox 360 Elite with a 120GB hard drive at £199.99, and £159.99 for Xbox 360 Arcade.

Having an Xbox 360 at the centre of your living room provides more fun for less and entertainment for any occasion through Xbox Live:

Play games for everyone.
Families and friends can get together to belt out tunes on “Lips” or build a famous foursome and relive the music of the Fab Four with “The Beatles: Rock Band.” For those who crave action, players can tear up the tracks of “Forza Motorsport 3”; jump back into the “Halo” universe as an Orbital Drop Shock Trooper in “Halo 3: ODST”; or deploy for combat with this year’s highly anticipated title from Infinity Ward, “Modern Warfare® 2,” the sequel to the best-selling first-person action game in history, “Call of Duty® 4: Modern Warfare.”

Watch live TV and movies.
Coming this Autumn, Sky Player on Xbox will offer access to Sky’s on line TV service including — Sky Sports – a comprehensive on-demand library of thousands of programmes spanning entertainment, movies, documentaries, kids, culture, news and sports. Along with high definition movies on Zune video megastore in 1080p clarity for many videos and the convenience of on-demand, coming this fall.2

Connect with families & friends.
Xbox LIVE, the industry-leading online gaming and entertainment network, will soon offer its 20 million community members even more blockbuster partners and features, introducing a whole new era of social entertainment in the living room. Starting this Autumn, you can interact with friends on Facebook and share photos and real-time status updates right from your television, or stay connected to Twitter by reading, posting and replying to Tweets.1 And visit the Xbox LIVE Avatar Marketplace for the latest fashions or download full Xbox 360 titles to your hard drive through Games on Demand.
With all of these experiences available for the holidays and the future addition of “Project Natal,” which will work with every Xbox 360 sold today and tomorrow, the Xbox 360 system provides more fun for less.