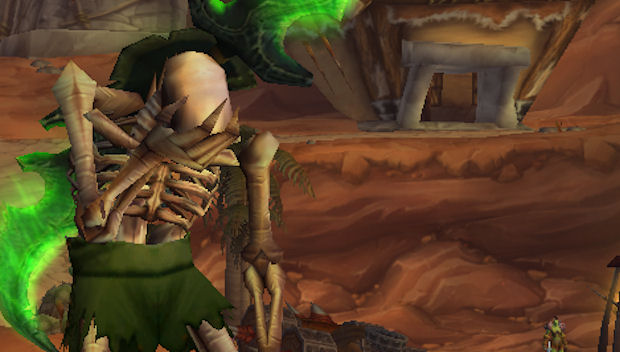 A World of Warcraft obsessive did his demographic a disservice recently by getting involved in a drunken dispute with his mother, grabbing her hair, choking her, and headbutting a wall. Oh, and he also ended up getting shot in the head by his grandfather.

27-year-old James Swan, who lives with his mother (obviously) had been playing WoW and getting drunk before the fight began. Swan’s mother demanded that the manchild tone down the noise while he played his game at 10pm, a demand that Swan took umbrage with. Rage of the Gods ensued as the MMO player eventually grabbed his mother by the hair and flung her onto a bed. He also did the same to his little brother, who had arrived to find out what the noise was about.

The mother ran to call the police, but Swan ripped the phone from the wall and proceeded to repeatedly headbutt the the spot where the phone once was. He then began to choke his mother into near-unconsciousness, threatening to kill her, before the grandfather became involved. Swan threatened to kill him too, so the grandfather got his gun. The two men then wrestled over the gun, which went off and shot James Swan in the head. The bullet bounced off his skull and went through a window. Luckily for Swan, he was only wounded, and was arrested after refusing treatment at a hospital.