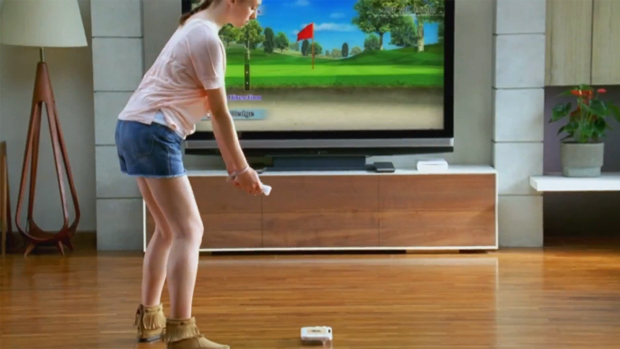 One of the most striking moments of the Wii U reveal at E3 2011 was a golf demo of all things. The Wii U GamePad was placed on the floor with a golf ball displayed on the controller’s screen. The camera panned out to show a player swinging Wii remote over the virtual ball. Then magic happened.

I vividly recall sitting in the Nokia Theater in Los Angeles watching the golf ball sail from Wii U GamePad onto the television screen. And while the preponderance of mental images from that glitzy daydream of an expo have faded from memory, this one remains as clear as day. For myself and many others, that was the preeminent moment of Nintendo’s system reveal. It gave us insight into what the Wii U had the potential to do. And now it’s finally happening.

Nintendo software designer Takayuki Shimamura confirmed the feature would be present in Wii Sports Club in a recent interview with the company’s president, Satoru Iwata.

Addressing how controls have changed for the latest incarnation of one of the most popular games of all time, Shimamura said “as for Golf, you use the Wii U GamePad and television screen. First, you place the Wii U GamePad on the floor.”

“We first announced the Wii U at E3 in 2011,” Iwata interjected. “We can finally enjoy Golf the way we introduced it through the concept video at that time.

“The ball is displayed on the Wii U GamePad screen by your feet, and the fairway is on the TV screen ahead of you,” Iwata added. “You can play just like you would play as if it was real golf.”

Other enhancements augmenting the realism include directionality. “The head of the club appears on the screen,” Shimamura noted. “And if you twist the Wii Remote Plus controller, the club head turns, too. Then, if you hit in that position, you can hit a fade and so forth.”

Golfers will supposedly be able to hit the green soon. The first round of Wii Sports Club titles will arrive on the Wii U eShop on November 7 with Tennis and Bowling.  Baseball, Boxing, and Golf will follow at a later date.