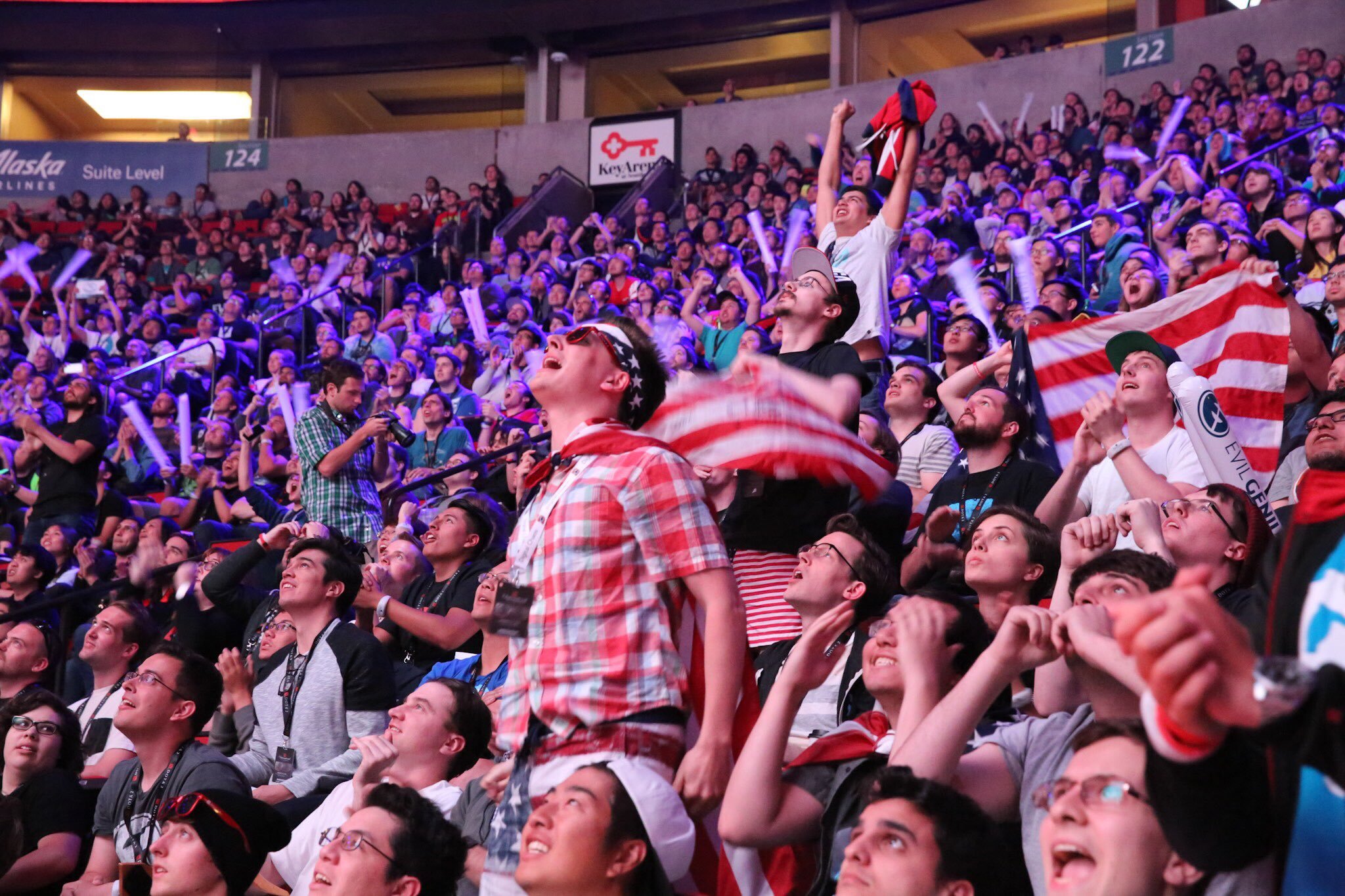 Yesterday, one of the more intense eSports matches of all time happened during Dota 2‘s International tournament. Over $20 million is up for grabs, but not in this particular match. We aren’t even at the grand finals yet, but I highly doubt that the marquee battle will come close to what was witnessed yesterday.

Hell, this was something that most traditional sports can’t hold a candle to. It will go down in history alongside “The Play” and “The Million Dollar Dream Coil” as the greatest eSports moments of all time, and I’m here to tell you why.

Let me just begin by saying that I love (American) football, more than Dota 2, actually. As soon as the Super Bowl is over in February, I go into a downwards spiral until I can start thinking of my fantasy draft in August. I’m also aware that some Super Bowls are way more exciting than others, and the same goes for Dota 2 matches.

Don’t get caught up in the semantics because you’re missing my point entirely.

I’m here to talk about the best Dota 2 match I have ever seen.

Yesterday, August 10, 2016, two teams in the final eight of The International 2016 faced each other in the winners bracket. Those teams were Evil Geniuses (EG), last year’s champion and full-on USA team, and EHOME, a powerhouse Chinese team that has been dominating recently. Dota 2 has always inspired fans to support their country’s team(s) just as much as any Olympics and you could hear the chants of “USA! USA!” or “EHOME! EHOME!” from the crowd through the commentator’s microphones.

Keep in mind, we are still days out from the grand finals. This is simply a match in the top eight.

Okay, if you fancy yourself a fan of Dota 2 at all, watch the whole thing before reading any further. If you’re just here for the cliff notes, read on.

Everything starts with the draft, as teams pick and ban Heroes to form their five-man team. The draft in this case is nothing mind-blowing with a lot of standard picks like Mirana, Faceless Void, Timbersaw, etc. Warlock is a very niche pick and I certainly haven’t seen much Ancient Apparition this tournament, but it’s still not surprising.

First Blood (the very first kill of a match) goes the way of EHOME, and for pretty much the entire game EG was lagging behind. Here are some graphs from the end of the game, which I think are self-explanatory: 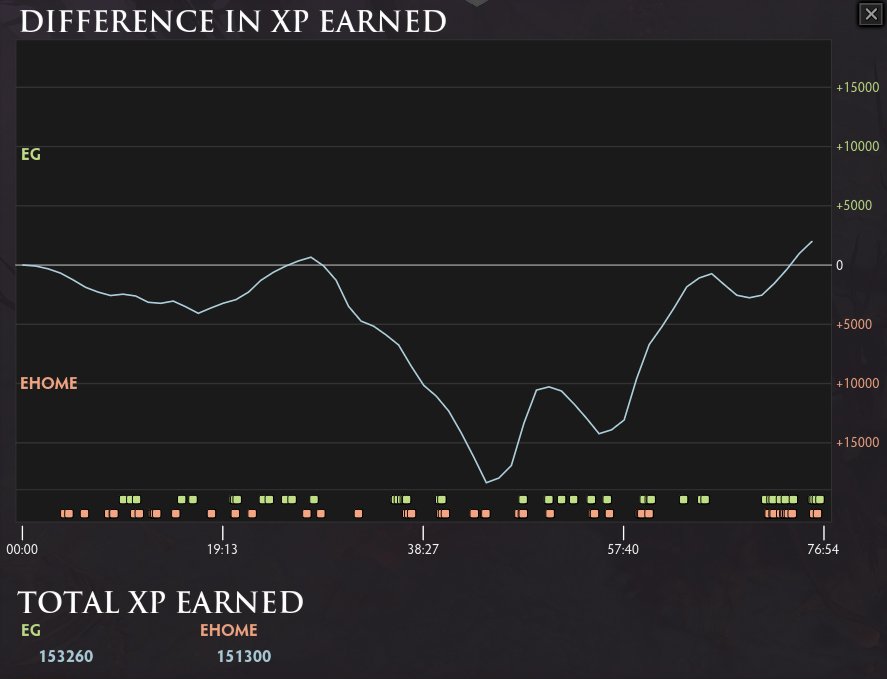 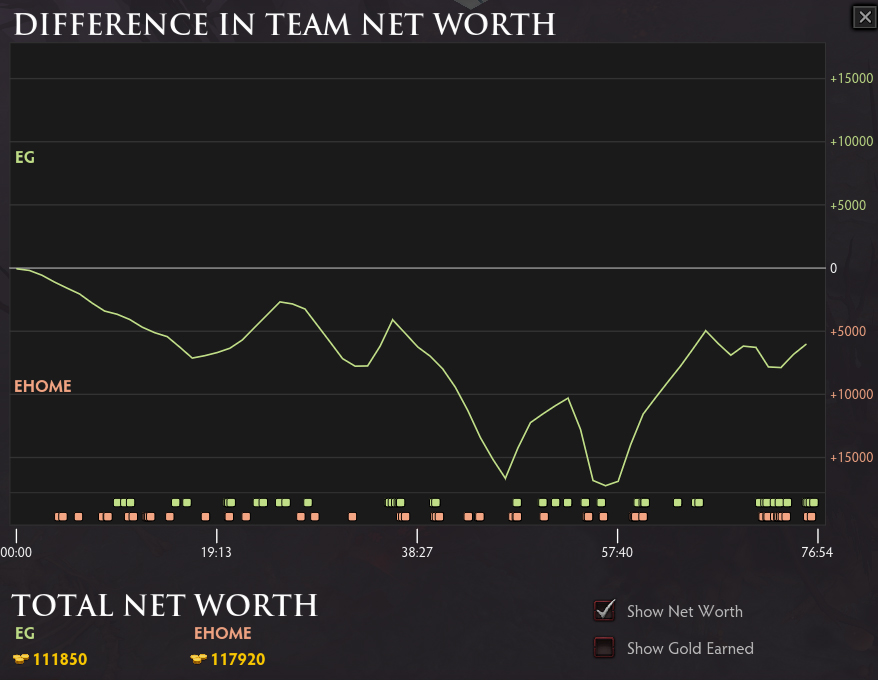 Despite this, EG continuously exhibited great decision-making and amazing execution to stay in it. Before the 17-minute mark, EG had lost all of its tier 1 and 2 towers while EHOME maintained every single one. By all accounts, EG was losing.

Looking back at those two graphs, one thing stands out: when EHOME had its biggest lead at the 45-minute mark, something happened that started EG’s climb in the other direction. That fight, which starts right before the clock hits 45:00, takes place as EHOME tries to siege EG’s base, also known as “the high ground.” EG has the advantage here since its tier 3 tower is helping and it is always harder to fight going into an opponent’s base.

EG takes the fight after taking down three of EHOME’s Heroes, including Juggernaut and Timbersaw, its two most important fighters. The Juggernaut, played by “old chicken,” even had the Aegis, which revives him to full health after a death. So technically he was killed twice.

This fight is also the debut of the item that would win EG the game: Dagon. Dagon isn’t often used in professional matches. It’s a usable item that can be upgraded four times from its base form, and serves a simple purpose: damage. You can both see and hear when the Dagon is used since it makes quite a unique zapping sound effect and shoots out a red and black lightning bolt at the enemy. By the end of the game, EG will own three Dagons, capable of dealing 2,000 damage instantly.

The Transition to Late Game

It’s at this point where things become very tense. EG had managed to hold, but it was in no position to walk into EHOME’s base and simply win. Far from it. There’s a mechanic in Dota 2 called “buyback,” which allows players to spend their gold while dead in order to respawn instantly. After using it, it will go on a cooldown and cannot be used again for some time. In addition, more time will be added to your Hero’s next respawn timer and you will earn less gold until the timer would have expired. If a player buys back and dies soon after, casters refer to it as a “dieback.”

Anyway, because of buybacks and EG’s already strong deficit, it can’t make a move for quite some time. The game transitions into what we call the “late game,” when certain Heroes shine while others become useless. Both teams actually have a pretty strong late game based off of their drafted Heroes. 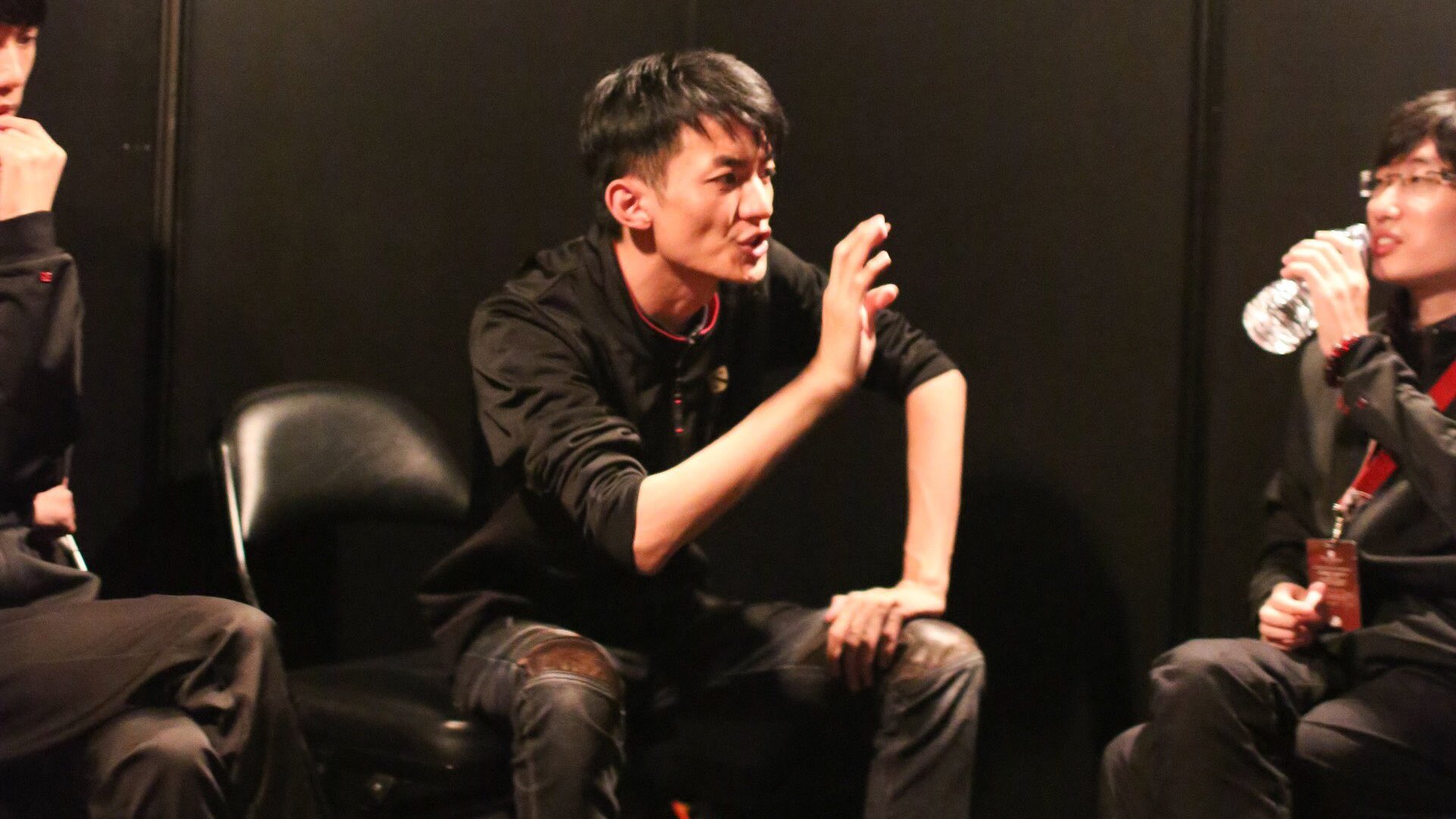 The 69-Minute Mark, or When I Thought it was All Over

It was at this point, this fight, that I knew EG had lost it. One commentator even says that “EG will need a miracle” to win. It’s at this point that a fight happens outside of EG’s base and EHOME looks to come away victorious. A dieback occurs for Universe, playing the Faceless Void for EG, who is out of the game for two minutes. At the same time, Fear on the Axe gets trapped outside of the base and tries to initiate from behind without full health. I’m not sure why he did, but it failed miserably and he dies as well and is unable to buy back.

Two of EG’s strongest fighters were gone for at least another minute and EHOME was in its base.

EHOME destroys the top lane’s tower and barracks and moves on to the mid lane (the bottom lane is already destroyed). After demolishing everything in the mid lane, the only thing left is the tier 4 towers and the Ancient. Somehow, the Mirana and supports for EG manage to stall until Universe has almost respawned. That’s when the real MVP showed up once again: Dagon. Some quick burst damage with Dagons and Mirana’s magic damage manage to kill the Timbersaw and push EHOME back out of EG’s base.

So with Timbersaw dead and EG’s main Heroes back up or soon-to-be up, they march down the mid lane towards EHOME’s base, which is already in shaky condition. Everyone has respawned at this point for both teams, though one of EG’s support is a long way from EHOME’s base. A fight erupts that kills all of EHOME’s Heroes except Juggernaut, who makes a ballsy last-ditch-effort move.

Juggernaut uses his Boots of Travel to teleport into EG’s unguarded base to try and win the game by himself. At the same goddamn time, the Ancient Apparition also teleports back to defend. If you don’t know Dota, that’s a super one-sided fight in favor of Juggernaut. The AA distracts the enemy creeps that are attacking the base and as he’s doing that, the Faceless Void and the Mirana teleport back to fight and kill the Juggernaut.

Everyone on EHOME is dead, and EG is marching toward the base. Only one support has buyback.

However, Universe makes a little pit-stop before going in — he heads to the secret shop and buys a Divine Rapier, one of the most infamous items in all of Dota 2. For those who don’t know, the Divine Rapier simply adds 330 damage (that’s a lot) to your character’s basic attack. However, dying with this item in your inventory drops it and allows anyone to pick it up, including the enemy. This item has won and lost games in spectacular fashion in the past.

So the Void struts in with his 607 damage and starts destroying towers. EHOME’s Heroes are slowly respawning, but as they march out of their fountain (spawn point), they are destroyed by EG’s Dagon Army. After 73 minutes and 35 seconds, EG emerges victorious.

The Comparison to “Real” Sports

This is easily one of the most exciting events I have ever watched, digital or not. Again, I love me some football, so this isn’t a case of “lol sports are boring I’m a nerd hahaha” or anything like that. I still get goosebumps every time I see the David Tyree “Helmet Catch,” Mario Manningham’s epic sideline catch, or, more recently, the greatest catch of all time (can you guess my favorite NFL team?). But with the exception of the Odell Beckham catch, which ultimately meant nothing for the game, those catches had one thing in common: time was winding down in the biggest game of the year.

That’s what makes them particularly exciting. If Mario Manningham makes that catch in week six of the NFL season, people cheer and forget about it. But because of the situation, it’s a Special Catch. If that catch isn’t made, time is soon up and the game is over. The difference with Dota 2 is that there is no time limit.

Even baseball, which can technically go on forever, is over when one team scores more than the other team. There is no score in Dota. When an onlooker asks “who’s winning?” 30 minutes into a match, there’s not always a clear answer. Yes, a team can have more kills or taken more towers, but as EG proved, that doesn’t mean shit. There is only one win condition and until your team meets it, you are not winning.

The bottom line is this: competition is exciting, online and off. Sports are exciting when the clock is winding down and one team is trying to surmount a deficit, with fans desperately holding their breath as the last pass or pitch or anything is about to happen. That moment when a football is airborne, headed towards the endzone with no time left, is indescribable. Dota 2 is uniquely exciting in that there is no set “end” point. The timer is always counting up, not down.

Dota 2 is very much a game of back-and-forths that puts way more emphasis on “who is the better team” instead of “who is currently winning.” It’s also a very complicated game, but that’s what makes it so special. Yes, it’s impossible for a newcomer to watch this match and know anything that’s happening. In fact, they’ll look at the kill count as the “score,” naturally. On the one hand, I wish it were easier to understand and get into so that more people could truly enjoy games like the one I’ve just described, but on the other hand, it’s that same complexity that makes the game one of the most exciting ways of competing ever.