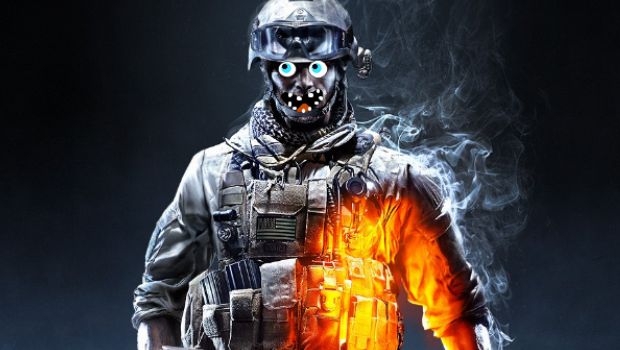 And other pearls of wisdom from the Battlelog community

The otherwise unremarkable post currently houses over 400 comments from PC and PS3 users, who seemed to be far more interested in this topic than anybody else. The obvious responses have been calls to replace one’s 360 with a PC or PS3, though other comments have been a bit more venomous.

The 360 lovers gave a good fight in response, leading to a thread that has escalated into something utterly remarkable. Amazing how these things just explode from nothing.

Because pointing at comments made by strangers on the Internet is funny, we’ve got some examples of golden fanboy nonsense for you to admire like fine art. Just make sure to avoid it if you don’t enjoy shameless displays of corporate loyalty.

“Glad to see the PC community members living up to the terrible reputation they all have. Not actually helping anyone, instead just being a bunch of snobs. You’re embarrassing yourselves and your platform you hold so dear to your hearts. Try to be civil for a change PC players, you might just make a few friends along the way.” – JesseTheZombie

“XBOX is for CoD Kiddies.” – MANFACE

“C’moon people,youre making the Call of Duty community look better than you are! Some people just don’t have the money for super pc,that’s why consoles are great. It’s great that DICE is caring about people on consoles,just like this. Be smart – Be better than CoD community!” – Pwnstermaster

“Xbox brings a 4GB HDD? Damn, and I thought Sony was being a bunch of idiots by releasing a 12GB HDD PS3! Boooo for Microsoft! Hurray for Sony!” – KainPT

“who the fuck gives a shit about fucking xbox 360? i dont want this spam shit on my battlelog pls” – nB-12MonkeysArmy

“lol @ the PC elitists. I have BF3 for console and PC, and guess what, I like it a lot more on ps3 so you can all shut your whore mouths and stop telling people where to play the game. They can play wherever the fuck they want to. Grow up and act your fucking age!” – YAH-64-_-zoomie

“All of you fuckers who are calling the Xbox shit are acting just like the prepubescent sons of bitches who play Cod and Halo on Xbox. While most people will agree that PC is a better all-around system, with consoles, you are basically paying for the specs of a low-end gaming PC to play games, and like others have said not every person can buy a gaming PC, so you don’t have to be a prick about it. It’s like saying that my phone is better at calling than yours because it has a touch screen. They kinda both do the same things just in different ways. DICE was just looking out for all their community members, which good companies should so. and on that thank you.” – PGLuna

“i see all these pc fan boy bitches posting bs on this thread (i’ve played both pc and ps3)and what i would like to know is who the fuck asked you for your biased opinion in the first place????this was obviously directed at x-box players..so why would you come to the thread other than to try and start some shit ..wtf get a life and stop trying to be a bully over the internet you fucking ass holes..quit braging about the size of your penis ..i mean hard drive and go back to your wii ..” – 4playy74

“This is why PC gaming is bad. All the elitist PC fan’s. Xbox players have there reasons for owning an xbox. You need a high end PC to play BF3 and the xbox is far cheaper, some people have more friends on xbox. I know there are some down sides to a xbox like reduced player count. Xbox is a more economical solution to play games.” – slothdozer

“Ps3= Best, No online payments, built in controller battery (rechargeable), blu-ray, does not scratch disks when movie the console while disk is spinning, and a whole load of stuff better then xbox…. not a fanboy but ps3 is better come on think about it…, xbox is only better by how many users play… ADD PSN: xviper-legendx p.s pc is 1 of the best too because you can have the best graphics, speed etc…” – xxViPeR-LeGeNDxx

“all you little cod pieces out there need to shut the hell up about PC being massively superior coz it ain’t, all the advantages you guys really have are better frame rates and more players per server, on the down side you have cheaters, no in-built comms and most PC’s are different so players aren’t as evenly matched. C’mon then lemme hear it bitches….” – bLaNsHaRd “RED DEAD REDEMPTION: suck my dick pc fagboys” – liandro-live

“any FPS game on PC is crap. d3d, aimbot, chams, esp, ect ect. these are all doable on PC, an security is cracked everyday to update hacks. we don’t have these issues on xbox, an ps3. so therefor, only thing that PC has up on console gamers is graphics.” – sp4de