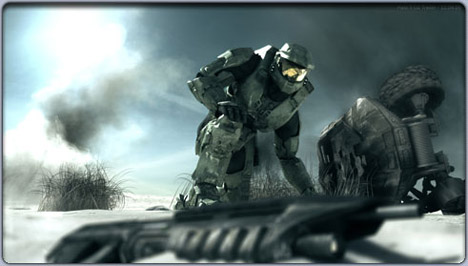 If you’re a dedicated lad or gal to the Halo 3 universe, then Bungie just made you wet yourself as they released a very detailed — and I mean detailed — info sheet on the assault rifle you’ll be using when the game comes out. Think you got what it takes to wield this boomstick? Take a look at the stats:

The MA5C 7.62mm rifle is an air-cooled, gas-operated, magazine fed weapon designed for automatic fire. The weapon has an attached electronics suite that provides information on rounds remaining in magazine, compass heading, as well as several other “housekeeping” functions.

More after the jump and even more (if you’re super nerdy) can be found at Bungie.

Whip it out and yank to this:

Improvements over the MA5B include:

– a heavier barrel with a 1 in 7 twist;
– a redesigned cowling to house the electronics suite that reduces weight and increases pointability of weapon;
– a redesigned handguard which is sturdier and provides a more positive grip.

Soldiers are very satisfied with this weapon. It performed well in a variety of environments especially given the perceived delicacy of the attached electronics suite. The general consensus is that every infantryman wants a MA5C.

The most significant negative comment was reference to the MA5C’s lack of a secondary weapon system.

“The (MA5C) is the workhorse for us ground-pounders. Just holding it makes you feel like God’s own anti-son-of-a-blam!-machine.”

“I have slogged through snow and mud and sand with my (MA5C); even got dumped into an open sewer with it and it has never given me a bit of complaint. I trust it like I trust my own arms.”

“The MA5C is built like a brick outhouse with Venetian blinds. You can pound on a mike foxtrot with it like it was a sledgehammer.”

“For every time I’ve felt outgunned by those alien bastards shooting blobs of energy at me I have felt like death himself watching their bodies come apart under a hail of lead from my (MA5C).”

“The romeo echo mike foxtrot’s decision to mechanically reduce the (MA5C)’s magazine capacity by nearly half is pretty frustrating; even if their data was showing that jamming because of loss of spring strength was becoming an issue.”

“The only thing I can think of that would make the (MA5C) any sweeter would be an under-slung shotty or a forty mike mike.”

“Next time I’m dirtside I’ve gotta try and find a red filter for the flashlight; slipspace travel screws with mail-order something fierce.

There is much to be said about the MA5C with regards to tactics and strategies. The weapon’s power can be described as being somewhere between the original MA5B Assault Rifle and the BR55 Battle Rifle. Obviously it shares more with the MA5B, though as we’ll demonstrate, aesthetics aren’t everything. It shares more with the BR55 than one might suspect. The clip capacity has been reduced to the 32 rounds that you’re used to seeing in the BR55, but the rifle’s range has been slightly improved over its predecessor to make it more formidable as an Assault Rifle. It also deals greater damage per round than did the original MA5B

At close range, the MA5C can be used to rain hurtin’ bombs upon one’s adversary. Fully shielded Spartans can take two blows from the rifle before dropping. Strategically, however, peppering your target with a healthy amount of rounds (ten, give or take), followed by a crushing blow from the butt of the rifle will score a kill nearly every time.

At medium to close-range, you’ll want to simply unload and put as many rounds into your target as possible. If you’re looking for a quicker kill, or if you have multiple targets, you’ll want to hit them with a ‘nade first to drop their shields and then clean them up with a few sustained bursts from the rifle. Often, when engaging multiple hostiles, it will be wise to try put nearly all of your clip into one target and after that one’s been dispatched, you’ll want to put a frag on the ground beside your next opponent and proceed to empty the remainder of your clip, the last seven or so rounds, into your target to finish off the kill.

Many new recruits will succumb to the temptation to lie on the trigger for targets of all ranges. Hopefully, over time they’ll learn from the veterans in their squads to pulse the trigger. Pulsing the trigger gives you a significant advantage with targets at medium range. It can be the difference between needing to reload, versus only needing a single clip to take down your target. The more disciplined soldier will win that battle every time.