In a future where corporate greed has depleted the Earth’s resources, humanity has taken to space to acquire the goods needed for survival. The asteroid belt was supposed to be the great salvation, an almost limitless bastion of metal and minerals which could be used to prop our depleted world up. However, the same corporations that harvested the Earth dry laid claim to all the most bountiful asteroids, forming a syndicate that continued to subjugate even the most powerful of the world’s governments. That’s where you come in. In one last great experiment in capitalism, you’ll be claiming stake in the New Martian Colonies, the last place within humanity’s reach that hasn’t been claimed by the hand of the syndicates.

Offworld Trading Company is being produced by Stardock, developed by Mohawk Games, and headed by Soren Johnson, Civilization IV’s lead designer. It’s a real-time strategy where there are no armies to move, units to build, or cities to conquer. Instead your fight is purely financial; sell high, buy low, and bankrupt the competition. It’s still in Steam Early Access, but the main gameplay modes are already all there. There’s a dynamic campaign in which you’ll play through a series of scenarios to make your way to the top of the Martian economy. They’ve also integrated a fairly intuitive set of tutorials that help get you into the game quickly, as well as take you through the advanced mechanics if you need the extra help. Multiplayer is also fully integrated, although when I checked there weren’t a ton of people playing the game yet.

I’m no math genius, but the Martian market is simple enough that it only takes a few minutes to pick up the basics. There are 13 resources that make up your stockpiles. Some of them, like power, water, food, oxygen and fuel, are required for basic operations. If you don’t produce these yourself, you’ll face a constant drain of funds as you’re forced to buy them for a steadily increasing rate off the market. Aluminum, iron, carbon, and silicon are your basic building blocks. These are collected straight from the source and into your coffers. Steel, chemicals, glass, and electronics, must be refined in their own facilities from simpler materials, and typically give the highest return. Each resource can be bought and sold on the market, and this is how you’ll be making your fortune.

So without massive armies, how do you beat your opponent? You buy them out. Each company on the playing field has both a total price value, and stocks available for purchase. The easiest way to victory is by purchasing a companies stocks until you’re able to get 100% owned, at which point you’ll take management of their operations. The tricky part is that your company is public as well, so you have to balance keeping control of your own company by purchasing your stock, as well as attempting to take control of others. Buying stock, as well as paying off debt raises a company’s price, while selling it, or getting hit by black market attacks, lowers their value. Most of the time, it pays to buy some and then lower the opposition’s value before buying another batch. If another company (or yourself) own 100% of their own stocks, it becomes rather expensive to take over as you’ll have to pony up the total price, cash money.

I found that to really effectively control the market, I had to specialize. When I first started playing, I just tried to rake in as much of every resource as I could, but I found that I never had enough of any of them to produce a steady supply of the big selling materals. I changed my approach to work with the type of business model my headquarters was aligned with. For the expansionist headquarters, I claimed as much carbon and iron as I could to turn into steel as their need for the resource is much lower than other models. With a robotic HQ, their lack of use for glass allowed for a surplus. Scavengers high output of carbon allowed me to focus on chemical production. Lastly, scientists’ ability to build hydrolysis farms directly on water hexes, and electronics plants on silicon, carbon, or aluminum hexes had me harvesting and selling food and electronics at a tremendous rate. 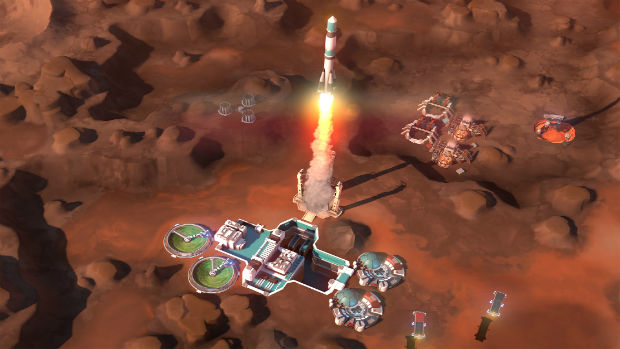 When everyone has the same rules, to get ahead you’ve gotta break them. That’s where the black market comes in. If you need extra claims, you can buy them here for an increasing fee. There are EMP blasts to knock your opponents buildings off line in a six hex radius, and a power surge that does the same thing but chains from building to building in a line. You can sabotage resource hexes with an underground nuke, which when used lowers the deposit level of a targeted hex by one. Dynamite lets you blow up a single building. You can also pay opposition workers to mutiny for a time which diverts the targeted building’s resources to your HQ for a little while. Alas, the only defensive option is the “goon squad” which protects a hex from any of the above effects.

Not all buildings are for collecting and producing resources. There are five of them that allow you to get an edge on the competition. The patent office allows exclusive access to technologies that vastly improve your ability to produce energy and collect resources. Also helping with resource collection is the engineering lab that utilizes the chemical resoures to upgrade collection rate up to four times for each material. The hacker network allows you to spread disinformation that can raise or lower the price of a particular resource momentarily. To keep your workers relaxed and spending their hard earned cash, you can build the pleasure dome which generates a steady stream of resource independent revenue. The most important of these though, is the launch pad, that allows you to launch 100 units of a particular resource to Earth at a time for massive profits. I felt that all of the buildings added to the game’s dynamic except for the hacker network. Its effects were too temporary to really waste the time fooling with it.

There are limitations in place though. Each player only has a limited number of hexes they can claim, and to raise them, resources must be spent on upgrading your headquarters. This is one system of the game I felt lacking. Once your HQ is level 5 and you’ve built out all your squares, there are times where you’re going to be just sitting and waiting to be able to take your next action. There are random claims auctions, both for an extra general claim that you can use on any square, and for high resource squares, but they can be few and far between. Sure you can buy claims on the black market, but this is one part of the game that felt stifling, like it was there just to slow you down. I would have liked to see a more complex real estate and land claims system integrated into the Martian stock market. I think an opportunity was missed by not adding land valuation to Offworld Trading Company and I hope that future updates will show us something a bit more interesting in those regards. 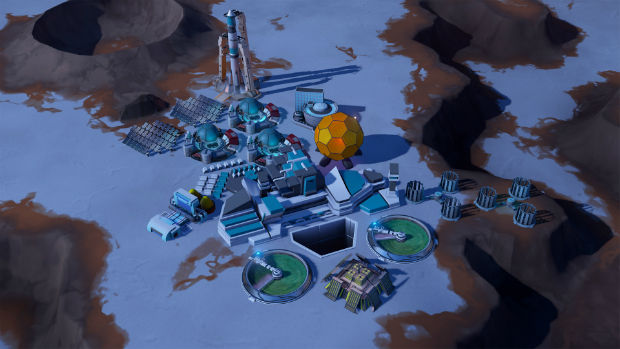 Although the beginning of a round is a bit slow, as you gradually build up funds to get that next building or mine operational the action builds with a frantic crescendo. In the late game it requires all of your attention lest you fail to sell at the right point or trigger a black market buff before your competition buys more of your stock. The problem I had though, is that the end of each game feels so anti-climatic. There’s no capital city taken, or fanfare, just a pink slip if you lose, or a victory message when you win. In fact, because of the feeling of disconnect between your operations and your rival’s, sometimes the game ended so abruptly it took me by surprise.

I believe the primary problem with the game as of right now is the lack of information displayed about your rival companies. For a game that is basically an animated spreadsheet, aside from building management and targeting for the black market, there is a stunning lack of graph or statistics integration with the main user interface. You can access information about historical stock prices, how many of each resource you and your rivals have bought and sold, building numbers, and so on, but the menu it is held in is completely separate from the game. This makes it to where if you want to use this info to say, use the hacker network to drop the price of the resource your rival is making their money off of, you have to enter a separate menu, analyze the information, exit the menu, and then execute your action. With all the real-estate on screen, I hope that Stardock ends up integrating the user interface and statistics readouts before the game’s official release.

I have to admit, although I was intrigued when I first saw Offworld Trading Company, I never thought I would have as much fun with it as I did. There’s quite a bit of balancing left to be done, and the whole experience is still rough around the edges, but it’s got a truly unique play style. For someone looking for the mid-ground between a action-packed RTS like Starcraft and the menu driven depth of Crusader Kings, this game might be for you. For now though, unless you’re absolutely sure that you want to take the plunge, a drop from the $39.99 price tag for Early Access might be worth waiting for. It’s a very different game, and it’s a bit too much money to gamble on something that is so hard to quantify by comparison to another title. However, with the quality of this early of a release, this title bears watching.