Few topics in the history of video games interest me as much as 3DO’s Army Men series. It’s not something we’ve seen often; a concept was devised with the hope of saving the company after the failure of the 3DO Interactive Multiplayer. It was brand-first, stretched across multiple genres, and it got pumped out at a staggering rate. Between 1998 and 2002, somewhere around a ridiculous 20 titles were released, and when you factor in the unique ports, you’ve got north of 30.

If I ever choose to write a non-fiction book about video games, Army Men will probably be my topic. It will sell next to no copies, but then I can finally sleep. Afterward, insanity.

I’ve played most of the games and most of their ports at this time. Let me think of one I haven’t played: Army Men: Air Combat: The Elite Missions, and I’m pretty sure that’s just a Gamecube port of Army Men: Air Attack 2, which I have played. But what if it isn’t? What are these “Elite” missions? I’ll find out eventually; that is something I can guarantee.

Anyway, if you asked me what the worst game in the Army Men series is — a collection of games of questionable quality — here it is: Army Men: Green Rogue on the PS1. A completely different game from the PS2 version, but we’ll cover that later. 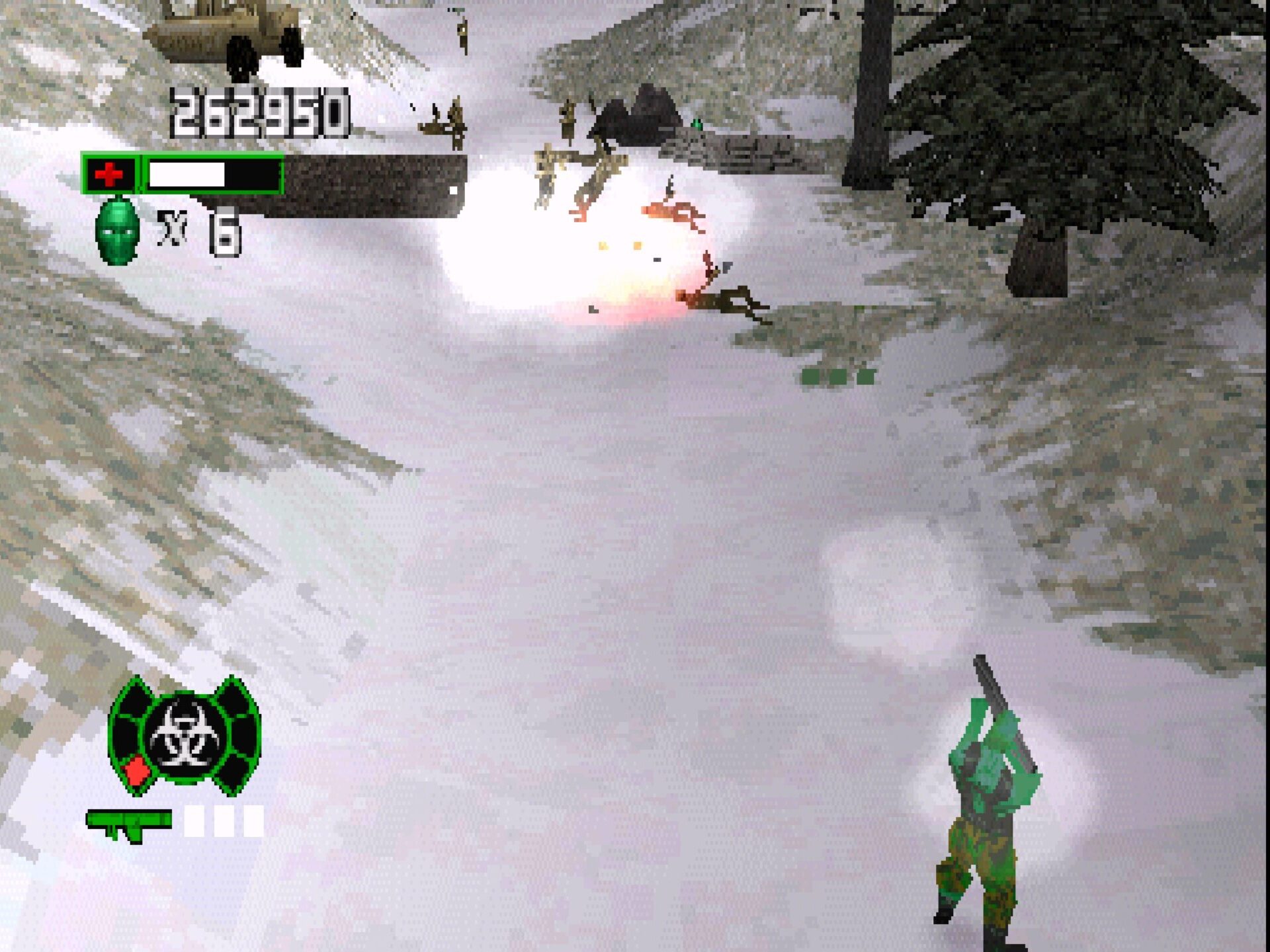 If nothing else, Army Men: Green Rogue has some pretty lavish cutscenes for its time. The story has some secret experiment where all the DNA(?) of Sarge and his heroes are mixed into one big super-soldier. It’s so weirdly straight-faced that you could almost forget that these are plastic figures. The helicopter transporting this super-soldier is ambushed and crashes. The still-living experiment then goes to work doing what he was designed for: killing everyone who is a different color than him.

The general idea of Army Men: Green Rogue seems to be to provide a more arcade run-and-gun experience. Kind of like Commando or Ikari Warriors. The PS2 version sort of succeeds at this, but the PS1 version is, uh… The word “abomination” comes to mind, but it sort of feels like that doesn’t go far enough. 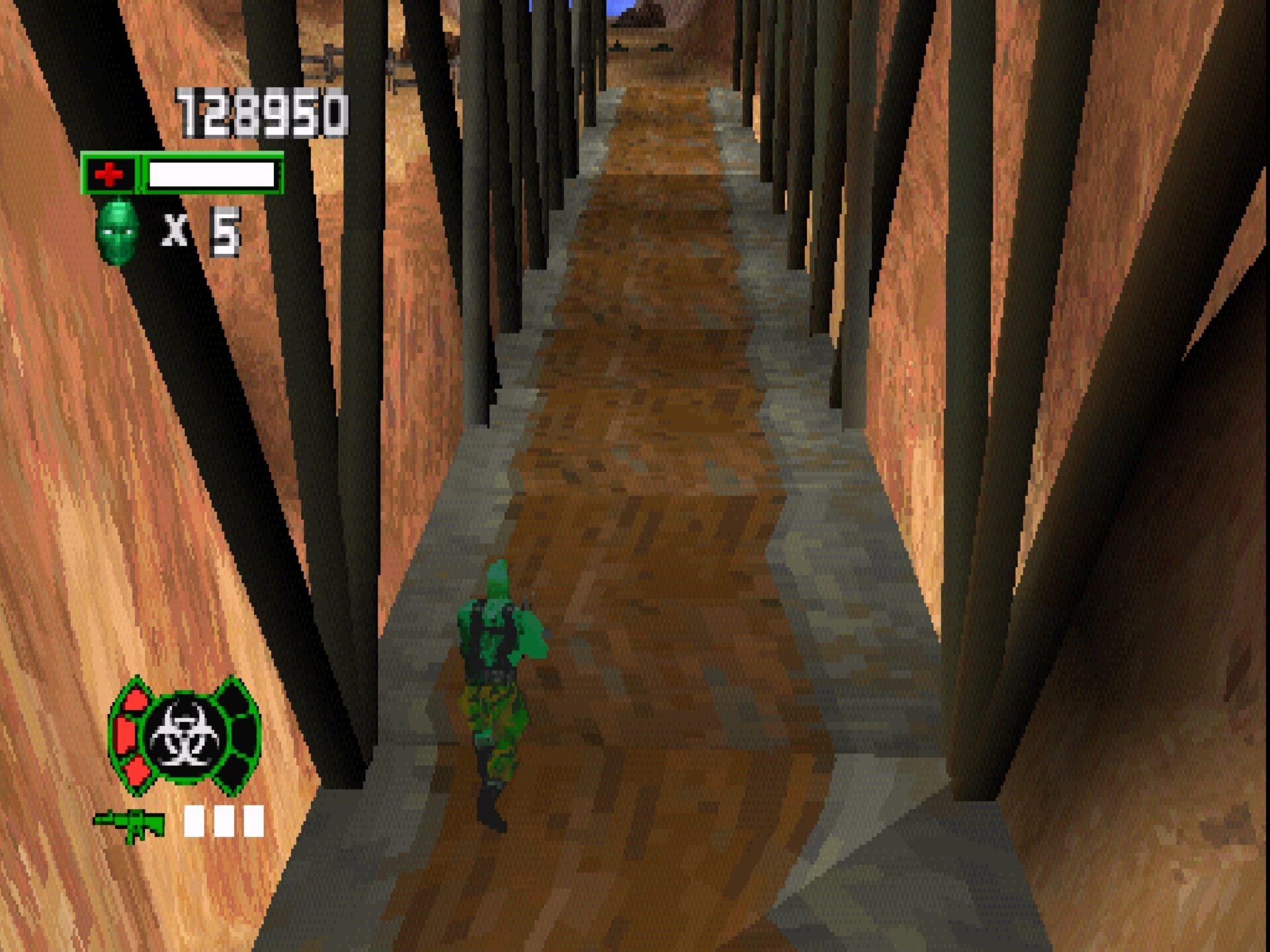 I’m really not sure where to start on this. Okay, let me describe the controls to you: D-pad is to move, X is to shoot, square is to change weapons, and L1 or R1 is a bio attack. Done. That’s it. Without exaggeration, you could map the game to an NES pad. Maybe I should. Maybe I should find a way to plug in an NES Advantage and play it arcade style.

Not that it would improve the game. The camera is tilted back to give you a view of what’s coming and that kind of sucks for it. Oh, sure, you can see targets at a range, but you can’t actually hit them. You’re armed with Nerf and it can only shoot about 10 feet. Enemies also have that range, which is fair, but that means the moment you can hit them, they can hit you. There’s not a whole lot you can do about that aside from shoot first. You can’t dodge, you can’t take cover, and you can’t sneak up on them. The only tactic the game really has up its sleeve is moving in a serpentine pattern while lobbing styrofoam darts at the enemies.

Avoiding damage feels a lot like luck, except I had the misfortune of realizing that the blast radius of grenades very slightly trumped the range of an enemy’s Nerf Elite 2.0 Commander RD-6. At that point, I’d stand outside their range and throw pineapples at them while they grappled with their intense fear of moving. 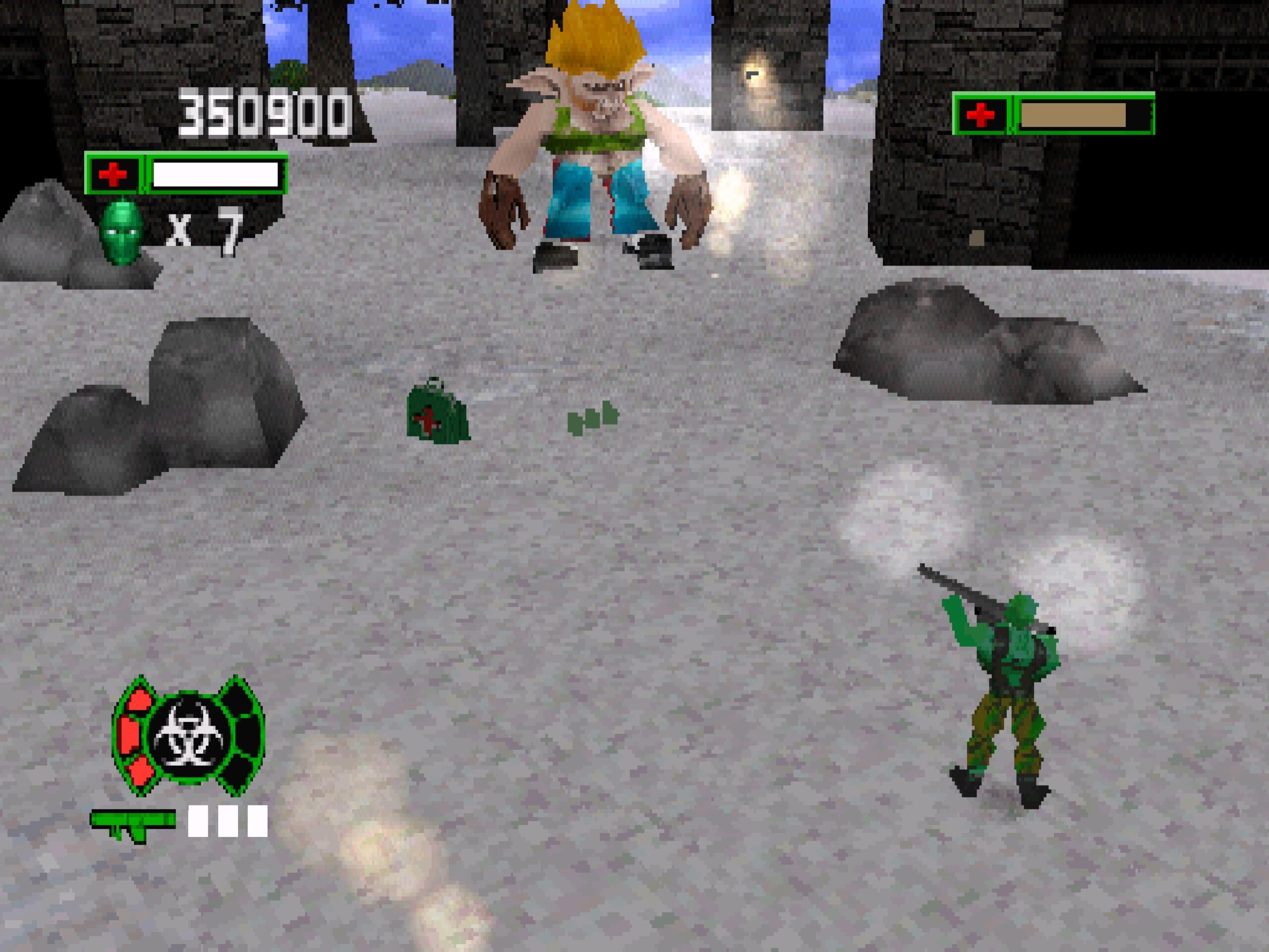 Do you know what might have helped? A roll button. Perhaps just a dodge button. Dare I dream: the ability to sprint? Anything to help you get out of the way of their bullets. But no, that’s out of scope. Are you not happy mashing the X button?

You pick up weapon upgrades, but that doesn’t fix the issue of range. If it did, the game would be a cakewalk, but it’s not. No, because you die really quickly, the enemies have this amazing ability to hit you, even while you’re moving. If that wasn’t bad enough, Green Rogue has enemies that appear behind you and attack from off-screen. It also places enemies in spots where the camera is quick to turn away from because the camera is evidently just a lens crammed into an ass.

Green Rogue is largely on-rails. You can’t go off-screen to the left or right, and the camera pans on its own. Poorly. Whenever it has to round a curve it stutters horribly. It has such a narrow field of view that it will often obscure enemies. What’s funny is that the developers seem to forget Green Rogue’s on-rails limitations, because on some stages they put items that you couldn’t get because your predefined route doesn’t go near it.

It’s unlikely the design began as a standard third-person shooter. You’re funneled through canyons and such that were obviously set up to give a clear sense that they’re just set dressing. It’s just like the design just sometimes doesn’t take into account its own mechanics. 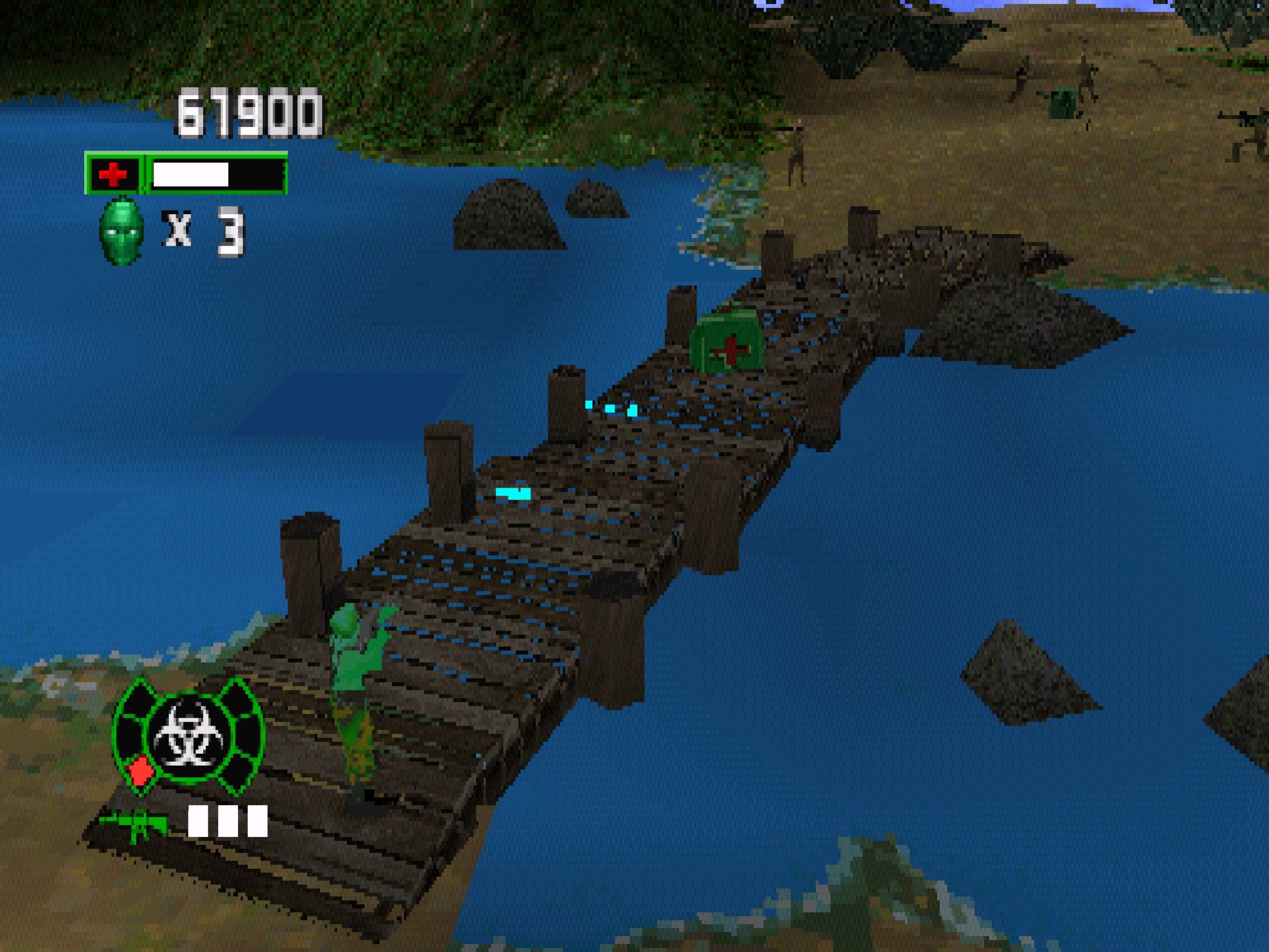 The small complaints I have about Army Men: Green Rogue would be big problems in more competent games. Like, for example, you can’t aim up or down, you’re utterly dependent on this really weak vertical auto-aim system that only sometimes decides to take responsibility for allowing your shots to clear small bumps in the environment. Enemies are often placed on ledges, and they must find it really hilarious that you can shoot at them, but can’t hit them.

Likewise, foliage sometimes provides impenetrable shields for your foes. It’s bad enough that it sometimes obscures them entirely until you walk past and get shot in the back, but you also can’t shoot through branches, even if you know there’s something there.

Your saving grace is the fully upgraded bazooka, which allows you to essentially project a while of splash damage in front of you. Above, below, behind cover; nothing is safe from splash damage. This may sound like it would make things easy, but it still has a pathetic range. At least it’s better than the flamethrower, which seems to only succeed in forcing you to step into the line of fire for the reward of watching the enemy soldiers die a slow, bubbling death. 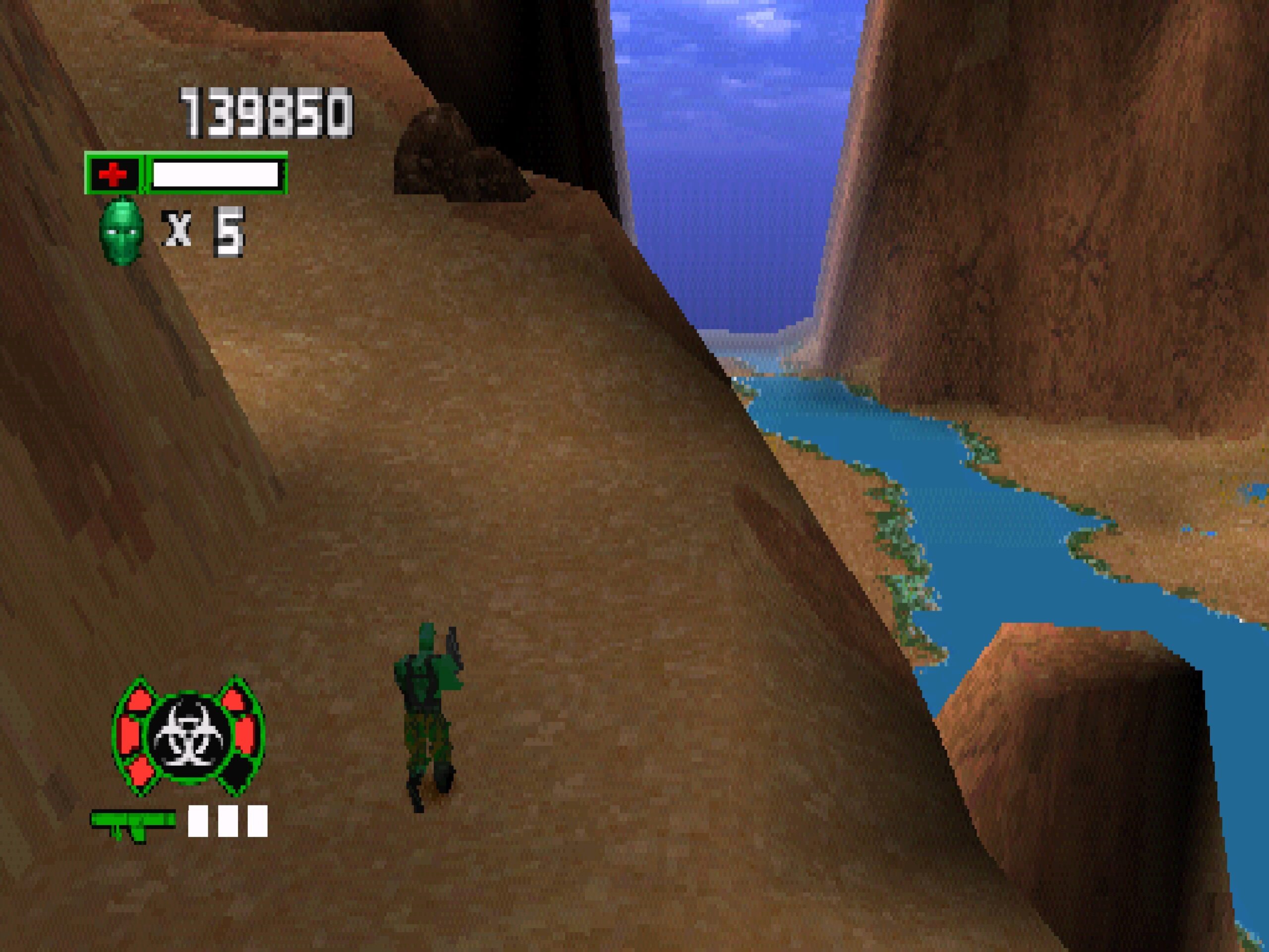 Just when I think I’ve seen everything, Army Men: Green Rogue proves that there’s a bottom beneath the bottom of the Army Men franchise. I’m not even sure how this happened. A lot of the development staff worked on games in the Army Men: World War sub-series, and those games are generally competent. It’s like they were asked to show that the PS2 Army Men: Green Rogue could be cut down to fit on the PS1, so they created a prototype and it was accidentally published.

I say with hesitation that this is probably the worst Army Men game I’ve played. The most egregious titles in the series, such as Army Men: Soldiers of Misfortune, are awful but playable. This one is barely that. It’s not the worst game I’ve played on the PS1, but being sandwiched between Hooters: Road Trip and Mary-Kate and Ashley Crush Course is still not a very good look.