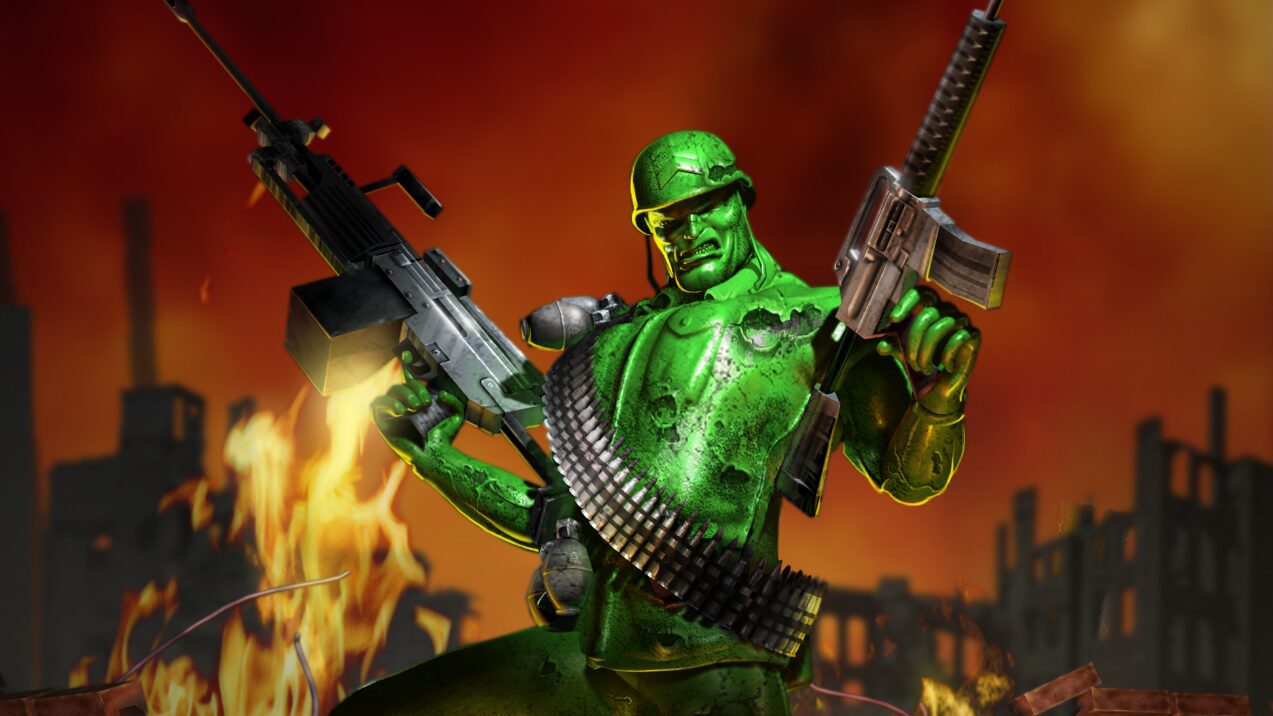 It’s a complicated subject, the Army Men series. The 3DO Company released somewhere in the realm of 25 games between 1998 and 2002. When you consider some of the ports were made from the ground up and entirely distinctive to the platform they were released on, the actual number of unique games is probably around 35 or more. I’m sure you can already see the problem.

“The problem was with all the early success of these Army Men games, the executives at 3DO thought they could ship an Army Men game (or bundle) every quarter and be successful,” Michael Mendheim, creative director of Battletanx and the Sarge’s Heroes subseries, told me. It’s obvious. The output was stunning, putting even history’s most prolific market spammers, like Guitar Hero, to shame. What started as a promising series with a few hits on its hands quickly declined into one that was treated with scorn and derision by players and the press.

The result is that the Army Men games are poorly remembered. I’ve previously compared the series to a shotgun blast: a sudden and abrupt spread, sometimes causing a lot of agony. Few mourned the loss of the franchise, but I still visit to place flowers on its grave.

The 3DO Company was founded by Trip Hawkins, who previously founded Electronic Arts years earlier. Hawkins dreamt of a console that would become the universal medium for games. Licensing fees would be almost non-existent, so developers and publishers would jump aboard with little risk, abandoning frontrunners Nintendo and Sega. Hawkins left EA to pursue this dream, but by 1996, the 3DO Interactive Multiplayer flopped under the weight of FMV game ports, and the company had to pivot to purely making software. Hawkins even took on a creative role to help out his teams.

Army Men started out quietly enough in 1998. The first game on PC, merely titled Army Men, was a reasonable success. Early the next year, Army Men II came out alongside a PlayStation remake of the first game called Army Men 3D. Again, these were pretty successful. By the end of 1999, however, a second PC title, Army Men: Toys in Space, the 3D action title Army Men: Sarge’s Heroes, and the top-down helicopter game Army Men: Air Attack were all released. Five titles in its second year, and the snowball had only just begun rolling. That’s where Michael Mendheim comes in. In 1998, he was creative director on Battletanx, which was a hit for 3DO. He was then given creative license on his own Army Men title and envisioned a character-driven game with more of a story, and that became Sarge’s Heroes.

Once again, Sarge’s Heroes was a hit. If I can wade into the story for a moment, it’s where I was introduced to the series, and it’s one that still holds a place in my heart. It had its rough spots, but a lot of its design, especially when it came to its levels, was fantastic. I remember following it through Nintendo Power up to its release and playing the hell out of it.

While I’ve trudged through a great deal of the Army Men series since then and could give you the full and detailed history, that’s quite a detour. We’re going to hurry the story along here.

The important fact is that not only did the quality of Army Men titles start to plummet almost immediately, but the public’s appetite for the games declined just as fast. I’d say that the four PlayStation Army Men: World War games are pretty consistent fun, but by the release of the last two titles, the press was practically ignoring them.

It became something of a laughing stock. In 2001, Portal Runner was released to harsh reception. After a particularly scathing review in Gamepro Magazine, Trip Hawkins even went as far as writing to the Editor-in-Chief to defend the title in an almost comical fashion. He described the staff as “angry young men” and threatened to reduce their advertising. I can understand him wanting to defend his creation, but the letter wasn’t a good look.

Around 2002, the pace of releases from 3DO had slowed and the writing was on the wall. “We already had a round of layoffs; everyone was nervous about the company’s future,” said Mendheim. He had a team working on a game called Four Horsemen of the Apocalypse. “It was an edgy, gritty, post-apocalyptic nightmare, based on the Book of Revelation.” Mendheim also believed this to be the best chance at saving 3DO, but it wasn’t to be. “I was called into a meeting and told that I could keep a small team working on Horsemen but everyone else, including myself, would need to make another Army Men game. That Army Men game would be Sarge’s War.”

Sarge’s War would be the last 3DO developed Army Men game, put together in haste as the company took on water. “Honestly, it was like developing the game on the Titanic and it took 9 months for the ship to sink,” described Mendheim.

If you’ve played Sarge’s War, you may have been stricken with how tonally different it was from previous games. The series’ standard features were there, but a lot of the color was washed out of it. In its place was a grittier veneer, even over its more cartoonish elements. The entire supporting cast of the Sarge’s Heroes sub-series–all of them–were killed in an explosion, sending Sergeant Hawk into an avenging rage. 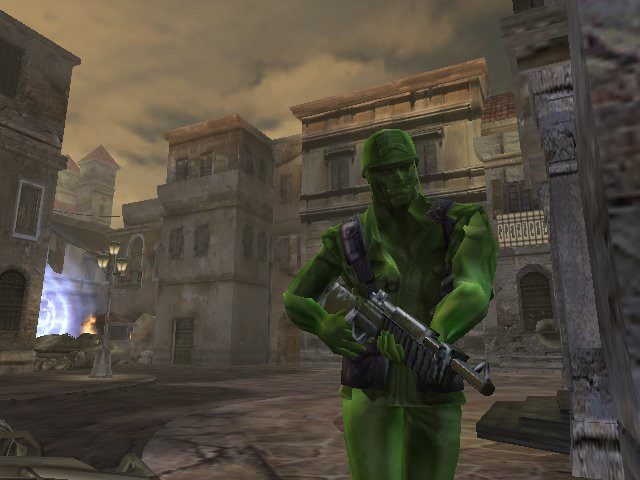 This was the sound of a series dying. There are plenty of franchises that have disappeared from the face of the planet, never to be heard from again. Jazz Jackrabbit, Top Gear, F-Zero; there are many easy examples of games that have just…gone away. Sarge’s War was a game on its deathbed, one last defiant scream before the embrace of oblivion. It was a deliberate move to put the final nail in the coffin and bring closure to the series.

I think Michael Mendheim put it best. “There are certain games that you just put your heart and soul into because you love the content, they are your babies. Sarge’s Heroes was one of those games for me. Every character in the game was developed with love and passion. Sarge’s Heroes was fun, positive, and hopeful. It was a game that made you laugh and feel some magic.”

“Sarge’s War was the opposite of that. It was grim and dark. The story in Sarge’s War was about loss. Losing everything that you love and care about. In the plotline, the entire cast and crew – Sarge’s Heroes died with 3DO. Everyone except for Sarge.”

“When I killed off Sarge’s Heroes, I also killed my desire to ever design another Army Men game. I designed the first and last game in the Sarge’s Heroes product line.” 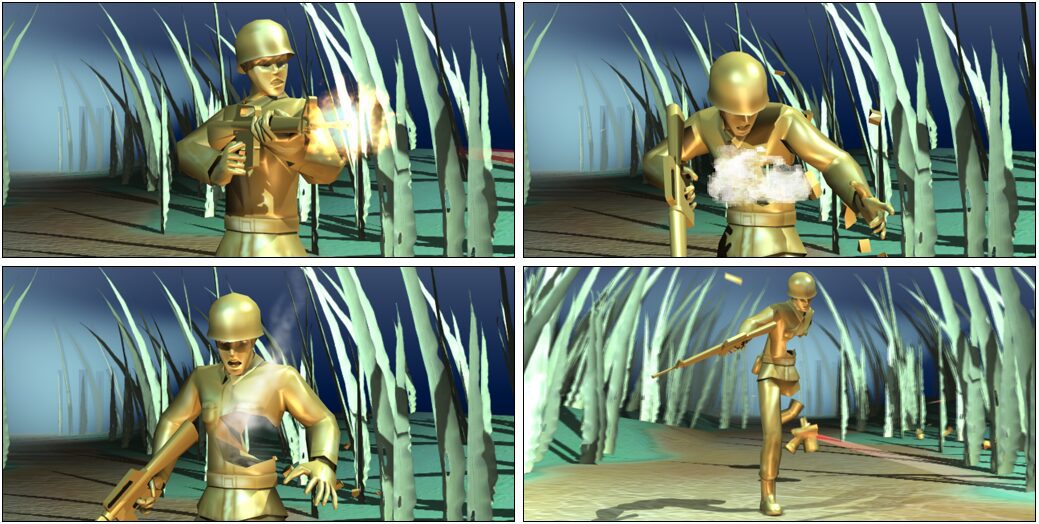 By the end of development, 3DO had already breathed its last, and Sarge’s War wound up getting released by Global Star Software, a subsidiary of Take-Two and the new home of the Army Men license. Some sources credit Tactical Development for completing the game, but according to Mendheim, “Our orders were to finish the game and that is what we did…the game was delivered completed as the ship went down.”

In comparison to the Army Men games that came before it, Sarge’s War was less rickety. It’s obvious that some of 3DO’s best remaining talent had worked on it, though under less than ideal constraints. It doesn’t reach the height of the series, but knowing the story behind it underlines it with melancholy. It’s a surreal experience.

“There are no bad guys in this story; everyone did their absolute best to try and keep the company alive,” explains Mendheim. “No one sets out to make a bad game. No one worked harder than Trip Hawkins, who even put his own money on the line to try and save the company. Unfortunately, not every story has a happy ending.” 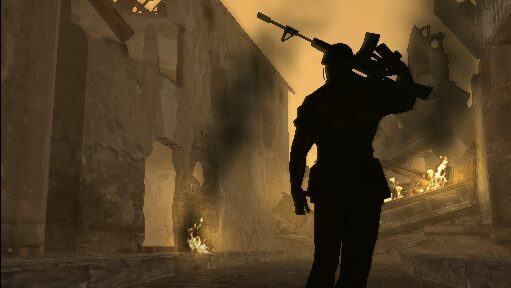 Global Star made a token effort at continuing the Army Men series. Their first attempt was Team 17’s Army Men: Major Malfunction in 2006, which I’ve previously covered, and it’s awful. Later they’d try another reboot with Army Men: Soldiers of Misfortune in 2008, which is similarly terrible. There was a mobile game for pre-smart phones, and then that’s it. Aside from a few re-releases, the series has been left to rest peacefully.

Whether or not it deserved that fate is a matter of opinion. On one hand, it was unwise and intrusive to flood the market with those titles. Releasing games of questionable quality to bank on a brand should never be commended. But on the other hand, they weren’t without merit or appeal. The best games were just buried under the worst. It could have been straightened out. It didn’t have to end this way.

Or, as Michael Mendheim put it: “I always look back at my time at 3DO and think what could have been if we had managed the brand better by releasing only one Army Men game a year and each year releasing a different type of Army Men game with cool innovations and game mechanics…maybe, just maybe Army Men and 3DO might still be alive.”