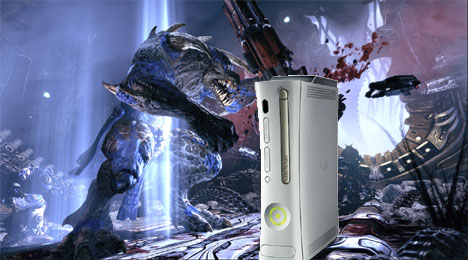 I’ve had a few Destructoid readers ask me since yesterday why only the PS3 and PC are getting the Unreal Tournament III Titan Pack. And I knew the answer; it’s just that my notes sucked, and I didn’t want to misrepresent here. Instead, I’ll let Epic Games tell you themselves. I’ve pulled this from an email they just sent:

The file size limitations prevent us from releasing it, not to mention we have things like split-screen support (which 360 already has), maps that are already in the 360 version, the integrated mod browser (which 360 doesn’t support)… the list goes on. Obviously, we are big supporters of Xbox 360 (Gears, anyone?) but there are significant hurdles keeping us from shipping the Titan Pack for Microsoft’s platform.

So there you have it. From what I understand, the code won’t actually fit inside Microsoft’s preset patch size limit.

And what I did recover from my notes of sh*tty handwriting details the rest as far as the maps are concerned. As said above, 5 of the maps were actually on the Xbox 360, but there’s no chance at getting the other 11, as those require some of the new features or weapons included in the Titan update.