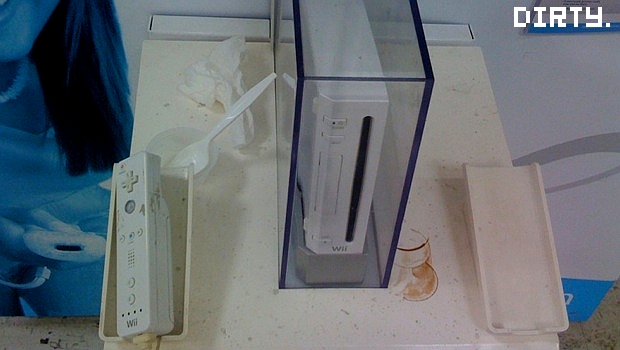 About two weeks ago, I went into my local Wal-Mart to grab some low fat sour cream. (I have a baked potato fetish. It’s how I get my carbs.) On my way to the refrigerated foods, I stumbled upon a Wii kiosk. Instead of being somewhere sensible, like the electronics section of the store, my Wal-Mart jammed a Wii at the end of an impromptu aisle of off brand soda.

Because it was so wildly out of place, I stopped to admire the set up. It was disgusting. The plastic shell covering the Wii and the hi-definition television were smudged by thousands of tiny fingers, not to mention streaked with some weird sugary substance. The nunchuck lay unceremoniously on ground, while the Wii remote, still in its proper holder, had nasty brown marks on its sides. The plate where everything rests was covered in rings from a chocolate pudding cup, dust, and black flecks. To top it off, a used napkin and spoon were left beside the console.

I have to admit though, the ice cream (not pictured) on the Vitamin Water side of the Wii tasted pretty good despite its warmth.

Filed under... #Offbeat#What the hell was that?