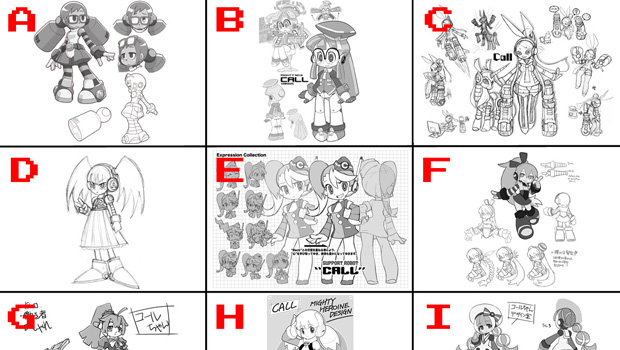 What do you want Beck’s online co-op partner to look like?

Good news, everyone! The Mighty No. 9 Kickstarter received a sudden boost in its donation rate. We’ve cleared $2.75 million, which means we are getting online co-op! Yay!

Now that we’ll be able to play as Beck’s partner Call, it’s time to vote on what the young lass will look like! The process is similar to how the Mega Man Legends 3 heroine Aero was selected — nine different designs from various artists have been presented, and you have until the campaign ends on October 1 to cast your pick. You only get one choice, and the top three winners will be presented during a livestream following the Kickstarter’s conclusion.

I think Call B is rather cute — she reminds me of Arale-chan from Dr. Slump. Call E looks a bit like a flight attendant, and Call C is some weird centaur Cut Woman. The worst is once again Inafune’s own contribution (Call D, obviously) — he didn’t even bother to ink her in! And what’s with the Wily hair? But if I had to make a bet, I would say Call F is going to take the win in the end. Her design is what most Call fan art is based off of, so the association is already quite strong.

Anyway, have at it, chums!

Mighty No. 9 – CALL OUT THE VOTE [Kickstarter]