Counting down until Halloween

Link made his way out of the clock tower, still in Deku Scrub form thanks to the Skull Kid. He just needed to find a way to return to his regular body. The Happy Mask salesman apparently knows the secret.

Wandering around Clock Town, Link felt that he was being watched. Looking up, he saw a very peculiar man dressed in green, floating through the air with the help of a large balloon. He seemed particularly interested in Link, and descended to speak with him.

“What’s this? Green clothes… White fairy… Sir, could you, by chance, be a forest fairy? Oh my! My name is Tingle! I think I am the same as you, sir. A forest fairy! Alas, though I am already age 35, no fairy has come to me yet…”

Link was very put off by Tingle’s appearance. The grotesque features, the ill-fitting clothes, the overt jealousy of Link’s fairy companion. He decided it was best to avoid this strange man for now.

After reclaiming his lost ocarina, Link used its mysterious powers to travel back in time a few days and spoke with the Happy Mask salesman again. The man upheld his promise to return Link to his former self. He played a somber tune, and Link’s body began to shift and change rather violently. It was not exactly a pleasant experience. As he left the leafy form behind, Link felt in his heart the soul of a Deku Scrub passing on to the afterlife. When he came to, he noticed a mask lying on the ground in front of him. A mask resembling the face of a Deku Scrub. With this mask, he would be able to switch between forms at will.

Continuing on his journey, Link took to the snowy mountains. Just outside of the Goron village, he caught a glimpse of Tingle floating in the distance. Link decided to try and pass him by. He hadn’t spoken to Tingle yet since going back in time, so the man shouldn’t recognize him anyway. But as he trudged past through the snow…

“Hello, Mr. Fairy! How nice it is to meet again out here in the mountains. You do not look yourself, though… You appear to have changed bodies! How can this be?”

Link was taken aback. How did Tingle know who he was? He was certain he hadn’t spoken to Tingle since the dawn of the first day. And he recognized Link even though he was no longer a Deku Scrub. Perturbed, Link gave Tingle a suspicious glance and continued on his way. 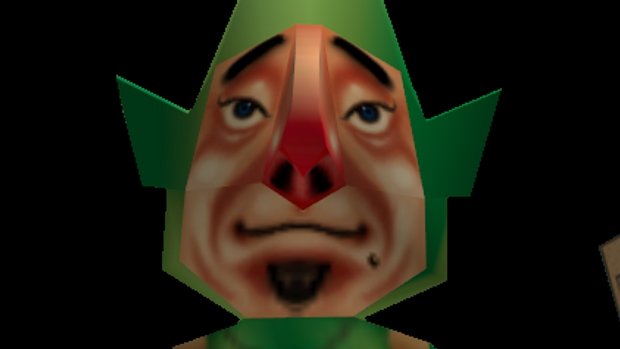 In the mountains, Link met the ghost of a Goron which led him back to its grave. The ghost was restless, but after playing the Happy Mask salesman’s somber tune, it seemed to be at peace. Once again, Link felt in his heart the soul of the Goron passing to the afterlife, leaving behind a mask in its place. He tried on the mask, and felt his body being ripped and molded into a new form. He could feel a remnant of the soul of the departed Goron pulsing through the mask as he admired his new body. Leaving the grave, Link was once again assaulted by the pesky 35-year-old.

“Mr. Fairy! You have changed bodies once again! I am unsure how you have obtained this power to become a Goron or a Deku Scrub at will, but I must know. If I could become a true forest fairy… You must teach me your secret, Mr. Fairy!”

Link barely acknowledged Tingle as he left the mountain in a hurry, eager to be far away from the unsettling middle-aged man.

Returning to the first day once again, Link made his way to the Great Bay coast only to discover a Zora in distress out in the waves. He quickly dove in and dragged the body back to the beach, but it was too late. The Zora gave its final breath, and died right there in front of Link. He decided to play the somber tune once more and acquired the Zora mask. Remnants of the Zora’s soul pulsed through Link’s body as he donned the mask, transforming into a slender, aquatic form. Suddenly, he noticed Tingle floating in the air a short distance away. Was he being followed? Tingle approached with a shocked expression on his face.

“I saw what you did, Mr. Fairy. You took that dead Zora’s face. It made you turn into a Zora! Interesting. How interesting!”

Link noticed a peculiar glint in Tingle’s eye that sent a shiver down his spine. Why was Tingle looking at him like that? He thought about trying to explain that it was a mask and not the Zora’s actual face, but he couldn’t find the words. Instead, he backed away awkwardly, turning to leave as Tingle continued to look him up and down.

Some time later, Link arrived at Ikana Canyon. Soon this whole ordeal would be over, and he could finally return to Hyrule. Unfortunately for Link, he would have to deal with the fairy fanatic once again. It seemed as though Tingle was able to be everywhere at once. Or maybe he really was following Link wherever he went… He approached and spoke in an unusually grim tone.

“Mr. Fairy, I know now how I can finally become a real forest fairy. I’ve watched you do it time and time again. You took their faces. You wear their faces to inhabit their bodies. This is the key to your secret power, and it will soon be my power to wield as well.”

Link hesitated for a moment, caught off guard by Tingle’s sudden malicious attitude. The man’s expression told Link he was dead serious. He reached a shaky hand out towards Link’s face, cackling excitedly.

Link turned and ran as fast as he could. Ducking behind a dilapidated hut, he whipped out the ocarina and hurriedly played the Song of Time.

Back in the clock tower, Link fell to the ground, gasping for breath. He thought he would just stay put inside for a while. It was the best hiding place he could think of. Nobody ever seemed to enter the tower, aside from the Happy Mask salesman. And speak of the devil…

“Ah, perfect timing! I just got done speaking with a client who is willing to pay an exorbitant price for a certain mask. However, this mask is not yet in my possession. But it shouldn’t be too difficult to acquire. In fact, its source is standing right in front of me. All I need is… a little something from YOU.” 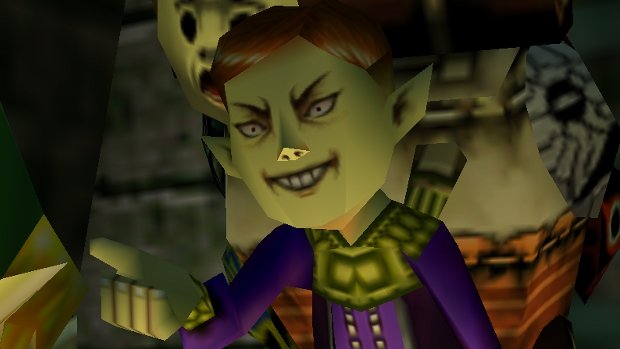