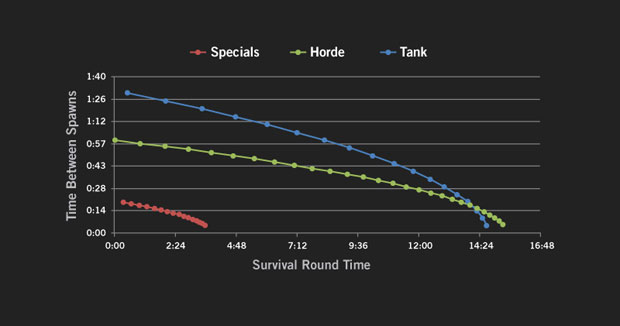 After what seems like a hellishly-long wait, Valve will be releasing the free “Survival Pack” expansion for Left 4 Dead next week. Available for both Xbox 360 and PC, it adds a new “Survival” mode, as well as two more campaigns playable in Versus mode.

On its official Left 4 Dead blog, Valve goes into some detail about the mode. At its core, the “Survival” mode simply “pits your team against never ending waves of infected,” with the goal to survive for a record length of time. But according to Valve, it’s not as easy as holing up in one section of the map and praying to your god of choice. From what it sounds like, this mode will be like the campaign finales taken to the next level… and it actually sounds kind of terrifying.

Pacing the mode — particularly how and when different types of enemies spawn — was key for Valve. So serious they were, that they decide to share with us a chart. Now, I know it’s a little early to be reading all them fancy graphs, but take a look at the time between spawns around the 15 minute mark.

Yeah, good luck with that.