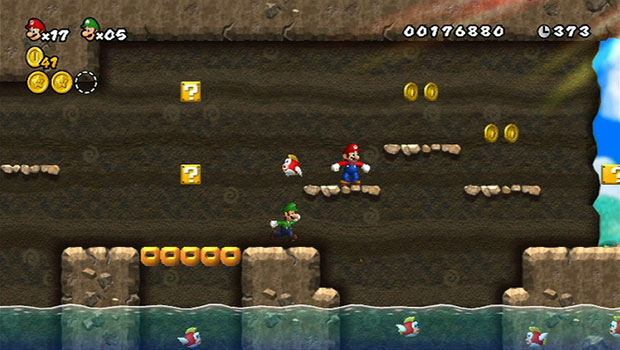 During a demo of the upcoming New Super Mario Bros. Wii with creator Shigeru Miyamoto, I finally had a chance to see the much-talked-about “demo play” in action. This mode, actually called “Super Guide,” is the mode everyone whined would “let Nintendo play the game for them,” essentially taking out all of the difficult and skill.

In practice, that’s not entirely true. Miyamoto openly admits that New Super Mario Bros. Wii is a difficult title, more so the relatively easy to complete New Super Mario Bros. DS. Playing even the earliest stages of the Wii title, this is obvious; jumps are trickier and enemies are more plentiful, making quick thinking and timing all the more important. Not everyone, Miyamoto says, will have the skill set (or the patience) to complete every world. But he sure wants them to.

When a players dies eight times on one of the game’s 80 stages, they’ll have a chance to hit a green “Super Guide” block. This will trigger a video in which you’ll watch Luigi play through the stage. This isn’t designed to give away all of the game’s secrets — it won’t show you hidden paths or all of the hidden coins, for instance.

It will however give players the opportunity to see how the stage could be completed. At any time, the player can jump into the action and take over, which would give them the opportunity to let the game itself guide them through some of the nastier sections. If the player decides, letting the game complete the level will allow them to move to the next stage.

According to Miyamoto, there are a few disadvantages to using the “Super Guide.” Players who persevere and decide not to use any “Super Guide” blocks will be awarded with something special (like some cool indicator on the game’s title screen), where as those who rely on them will miss out. There’s another downside to using the guides — shame.

“I find that when [the “Super Guide” block] does appear,” he says. “I kind of feel regretful and guilty that I’ve let that happen. So I’ve often found that playing the game, when that happens, it kind of inspires me [to say] ‘I’ve already done this bad, now I have to clear the level on my own.'”

So let’s come clean right now folks — will you or will you not be using New Super Mario Bros. Wii‘s “Super Guide” when the game ships on November 15? Or will you, like Miyamoto, take it as that extra bit of kick in the pants to get your gaming act together?