[Update: Activision has released a new trailer and “roadmap” detailing season three of Modern Warfare and its battle royale side-title, Warzone. Tomorrow will see the return of Alex to the battlefield, a Quads mode for Warzone, and new weapons, maps and vehicle skins for Multiplayer. 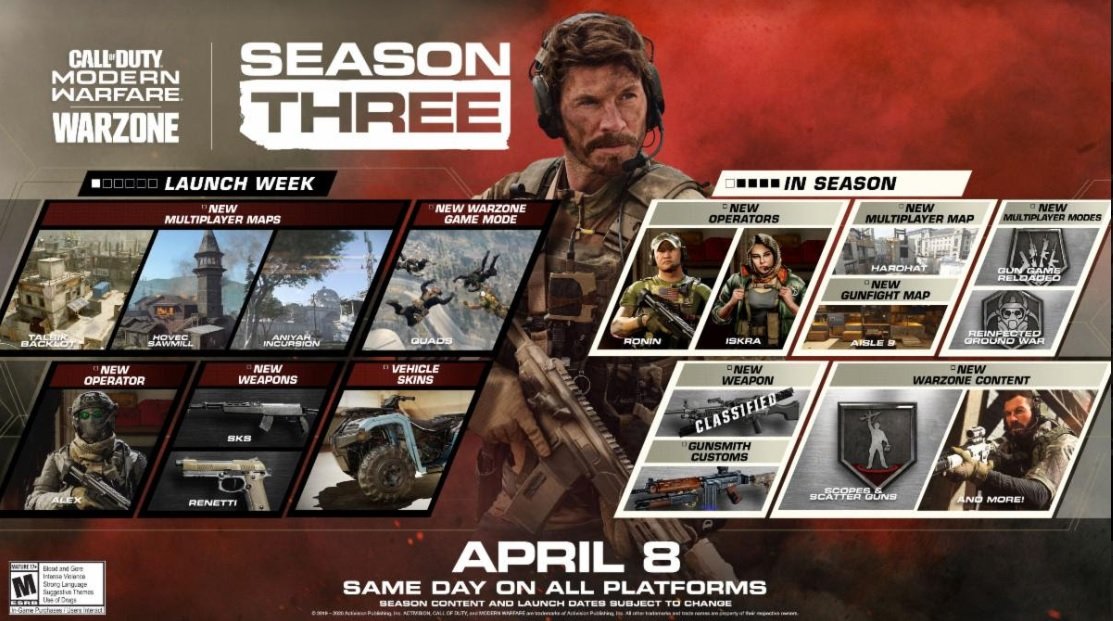 The coming weeks will see the addition of two new operators: Ronin and Iskra, along with new multiplayer modes, Gunfight maps, weapons, and gunsmith customisations. You can check out the full details over at the official Call of Duty blog, and watch the new trailer at the foot of the article. Season three launches on all platforms tomorrow.]

Activision is getting set to launch the third season of content for military shooter Call of Duty: Modern Warfare. Along with a new Battle Pass, as well as skins, weapons, maps and more to multiplayer, three new operators are expected to join the roster, including the return of campaign protagonist Alex.

Alex is a CIA operative and one of Modern Warfare‘s player protagonists. Sympathetic to the plight of the Urzikstan rebels and their leader, Farah Karim, Alex nobly sacrifices himself in the campaign’s final moments, staying behind to ensure the demolition of a toxic gas factory. Or so we thought, as it seems your boy Alex made it out of the factory alive, and is now ready to sign up for Modern Warfare‘s intense multiplayer mode.

Alex is now sporting a prosthetic leg, suggesting that although he escaped with his life, he was seriously injured in the process. Developer Infinity Ward has received praise from fans online for featuring a player character with a prosthetic limb, a testament to the many soldiers who return to active duty despite injury.

Call of Duty: Modern Warfare is available now on PS4, PC, and Xbox One.