On October 4th, our good friends over at iPlayWinner and Southtown Arcade teamed up with Capcom to stream an “invite-only” NorCal Ultimate Marvel vs. Capcom 3 tournament. Many of the top players from the Bay Area gathered at San Francisco’s premiere arcade to not only compete for prizes donated by Madcatz but also get their hands on the latest build of Capcom’s other upcoming fighter, Street Fighter X Tekken.

After many great matches showcasing the power of Nemesis’ one-frame Level 3 grab, how annoying Ghost Rider’s jumping S can be, and some brilliant uses of Virgil’s Level 1 Ouroburos in combos, coL.cc’s Ryan “Filipino Champ” Ramirez showed that these players still have a lot to learn if they are going to beat his Dark Phoenix. But as Capcom’s Seth Killian mentioned to me multiple times that night, “Just wait till you see Phoenix Wright….”

For some more coverage of this event, read on! 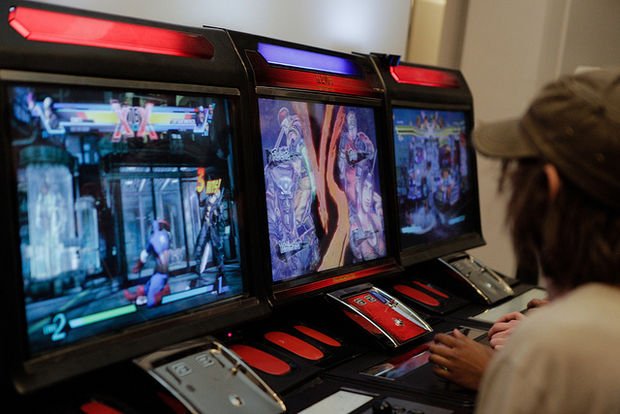 Southtown Arcade is a growing arcade tucked away in downtown San Francisco, and it’s starting to be the hub of the city’s fighting game community. The owners of the arcade aren’t in it for the money — like many of us, they miss the arcade days of the past. Therefore, this location was the perfect place to hold this Ultimate Marvel vs. Capcom 3 invitational.

It was really amazing to watch these professional fighting game players, some who had never played the game before, pick up the new characters. Dacidbro, a competitive BlazBlue player in his own right, picked up playing Virgil that night. Before long, he was fully utilizing Virgil’s quick teleport to initiate some crazy mixups. Two other characters that impressed me were Hawkeye and Captain America. Hawkeye’s instant Level 1 Hyper Arrow was fast enough to catch Dark Pheonix right after her transformation, earning that player his win. As far as the Captain is concerned, many people were starting to utilize his new off-the-ground Shield Slash to extend his already powerful combos.

Check out this awesome match between Dacidbro and X-Ray, one of the top eight finishers at EVO 2011, to see how amazing Virgil can be!

Not only did Capcom bring Ultimate MvC3 to Southtown Arcade, but during the tournament, there were also two demo units of Street Fighter X Tekken. I’ve had some time with this game already, but it was great to pick it up and play against some high-level fighting gamers. The attitude for this game was pretty mixed amongst the competitors. Some players picked up the game fairly quickly, using Tag cancels to extend their juggle combos. Others took a while to warm up to the game. Filipino Champ, a seasoned Dhalsim player in Street Fighter IV, noticed that most of Dhalsim’s normals are completely different and will require extensive adjusting if he wants to maintain his previous strategy.

All in all, this was an awesome event that shows how close Capcom seems to be with its fighting game community fans. Special thanks goes out to Southtown Arcade for hosting the event, Capcom for bringing the games for us to play, and iPlayWinner for inviting me along!