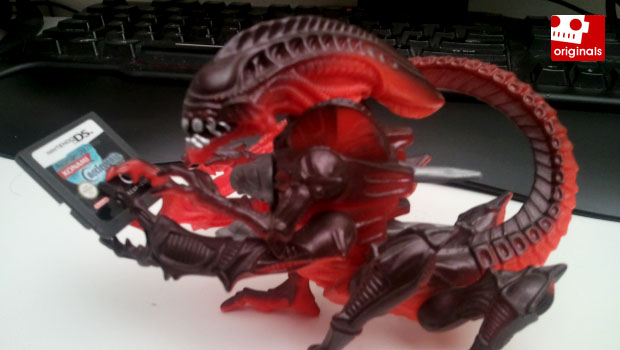 Kenner’s range of amazing Aliens toys was, scientifically, the greatest thing about the nineties. These action figures took the idea of Xenomorphs inheriting genetic traits from their hosts — as seen in Alien 3 — and ran with it, designing Aliens with ludicrous physical properties loosely based on animals. The great irony is that, for something that jumped the shark so hard, there was never a Shark Alien.

There was a Bull Alien, however. And a Panther Alien. And, my personal favorite, the Killer Crab Alien. Not just a regular crab, my friends, but a killer one. That’s scary, isn’t it?

Oh yeah, and I’ve made some of these toys hold videogames for a few minutes, because that justifies a vapid list article, doesn’t it?

You’ve noticed that I’ve not reviewed NeverDead yet. How can I, with this bloody lummox holding it and stopping me from being able to play it because he is definitely alive and that is the joke? Gorilla Alien is good for holding videogames because his arms move back and forth to create a gripping motion. This allows you to place the edge of a case between his hands and he’ll gently hold the sides, like a loving mother would hold a babe in its swaddling clothes.

Gorilla Alien can also spit water from its squeezy rubber head, but do not do this to your videogames, as they will become damp and could take anywhere between two to three minutes to completely dry — unless you hold it over a hot toaster or Bunsen burner.

Rayman Origins is a brilliant game that did not receive much marketing, so what better figure to hold it than a brilliant Alien toy that did not receive much marketing? King Alien (Deluxe Alien Leader) was featured on TV once, but still many fans do not realize it exists. Hopefully, this feature can give King Alien (Deluxe Alien Leader) the spotlight and respect he deserves.

As with the Gorilla, King Alien (Deluxe Alien Leader) can hold figures in place thanks to his obligatory dynamic action. His ornate head features mandibles that open and snap shut — this is a very exciting action, but be careful! The mandibles are sharp and you risk doing superficial damage to your game cases, unless the cases are plastic or harder than thin paper. Thank God most of them are!

King Alien (Deluxe Alien Leader) also spits water, but I don’t need to warn you again, do I? Good.

Look out guys, it’s the Flying Alien Queen! She is so scary and enthralling, with realistic grasping talons and wings that actually flap! She cuts quite the courtly figure, standing next to the fantastic Rhythm Heaven Fever.

In this photograph, I have placed the game against one of the Queen’s sprawling wings, using her atrophied arm to secure it in position. This is an excellent display piece that anybody can create, for use in the home, office, or at a church function. It is sure to be a talking piece, as the local ombudsman notices the stark contrast between beast and music. That’s quite a powerful and evocative thing, isn’t it? Yes, it is.

Hey, it says “Dawn of Sorrow,” not “Prawn of Sorrow” like you think it does, Killer Crab Alien (sea joke)! By far one of the best action figures ever created, there is nothing about Killer Crab Alien that isn’t great. From the gorgeous red-and-black color scheme to the multiple points of articulation and sleek bodily design, Killer Crab Alien has it all. Also, the mental image of a Facehugger on a crab is funny.

Our crab friend is perfectly designed for holding small artifacts in its frontal pincers. Here, it is holding Dawn of Sorrow like a newspaper, which is a satirical statement on how the corporate news media peddles grief in order to manipulate the emotions of the common man (or the woman ones).

FACT: Killer Crab Alien features two spring-loaded parasites that fire when the spines in the back are depressed. Always carry Killer Crab Alien when out at night, as it is excellent for fending off attackers.

I was going to try and put the game in the end of its tail, but it kept falling out so I gave up.

Panther Alien was very cool looking, and when you pressed on its back, a little stingray thing shot out of it. There’ll be none of that fucking shit today, though! Here, we see Panther Alien holding Resident Evil: Revelations, which Capcom spelled wrong on the box for a fun joke. Panther Alien reminds me of golden lions in a Chinese palace, so it is very stylish and impressive to have one holding your classic 3DS games.

Literally nobody in the world bought Enslaved, but that’s okay because it means there are more copies for Mantis Alien to enjoy (though, in all honesty, he really only needs the one). Mantis is another figure to sport the “grip” attack motion, but the long range of his claws and the tight pinching motion makes him a superior choice for those who want an ideal forward-facing videogame centerpiece.

I have chosen Enslaved to showcase Mantis’ gripping potential because the lush green color scheme complements the toy’s own verdant pigmentation. The two items blend into one another, creating a natural yet emotionally fulfilling display that is sure to impress your friends and entertain some animals.

I think that Final Fantasy XIII was a load of bull, so here’s a load of Bull (Alien) to carry the sequel on its back like a big bloody crucifix!

At first glance, the Bull Alien (which is the first Kenner Alien I ever owned) is poorly designed for holding videogames, almost as if Kenner didn’t plan for such an eventuality (which is unlikely). Fortunately, by positioning the tail behind the game case, one can get a compelling diorama that maximizes the videogame-holding potential of the figure while showing off the game itself in a new and daring light. Bravo!

While Kenner would bring out a regular Alien Warrior, such a vanilla role was fulfilled by Scorpion Alien for most consumers. By far the most normal looking of the standard figures, the fact that its main action was an exploding torso confirmed that it was designed as a regular drone but had to have an animal associated with it.

The choice of Scorpion was probably regretted later when they designed Killer Crab.

In any case, one can stick a DS cartridge between Scorpion Alien’s fingers to have him hold it. It looks so adorable and your daughters will want to keep it. She can’t have it though, because these are collectors’ items (probably).

The Flying Queen was cool, but there’s nothing like a classic, and that’s what this Queen figure most certainly is. She is also holding a classic game, Time Crisis: Razing Storm, which I definitely meant to fish out of the bottom of a storage box and didn’t think was a different game until it was too late and I had to just make do with what I’d gotten.

Anyway, the game is propped neatly up against her extended tail, which can be swung in a whipping motion. This is a large display, so make sure you’ve cleared plenty of room on your kitchen countertop or car hood before erecting it.

So there you go. I have more than nine figures, but couldn’t be bothered to do any more.