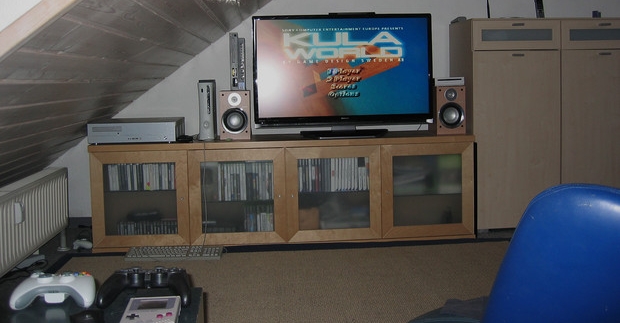 Today’s gaming setup belongs to Fana7ic. His room is located in his attic, which I think is pretty neat since I’ve never stepped foot in a attic room. Simple things impress me. Anyway, Fana7ic has a nice collection of games in his very nice looking room. So nice. More pictures of his setup over on his C Blog.

The first RetroforceGO! baby, Dtoid Community discussed E3, Jim Sterling rides a Tucan, who wants a Alien Hominid hat, pictures and video from the KarE3oke party and plenty more happened within the community these past two weeks.

Hey, look at what dyslixec made!

Jonathan Holmes, his mind, it was blown.

Zen Albatross loves himself some chiptunes. Check out his weekly article covering all things chiptunes related.

Faith rediscovered a video made up of a bunch of Destructoid related artwork from back in the day.

Dexter345 has some videos and pictures from the Destructoid KarE3oke party.

Atlus’ Clayton S Chan had a good time at E3 and our KarE3oke party!

GoS-CPT-Stewart made another game. It’s called Up and Atom and it’s a puzzle game.

Gandysampras and Half left are, um, uhhhhh, yeah.

What should Faith make next?

kitae checked out the videogame burlesque show down in LA last week and it was hot hot hot.

silvain actually managed to come up with some great ideas for the Wii Vitality System.

Look at my awesome swag from E3. LOOK AT IT!

teh KangrejoMan knows that he has meet the one thanks to the awesome Mega Man hat that was made for him.

SuitcoatAvenger made some Prototype and Street Fighter IV art. Nice!

Check out the sweet prizes DynamicSheep won from the Flock contest!

Dead Movie Star made a game. Go play it.

Here is what Jim Sterling would look like riding a giant Tucan, as drawn by GamingGoddess.

garganroo made some awesome Plants vs Zombies fanart. He has a lot of great artwork, actually.

Wow! ChillyBilly gave us a great guide at all the possible ways at game collecting.

Highlights end this week with the new power level status bar for Forum goers. Bushesofghost made the sweet little graphics so thank her. THANK HER!