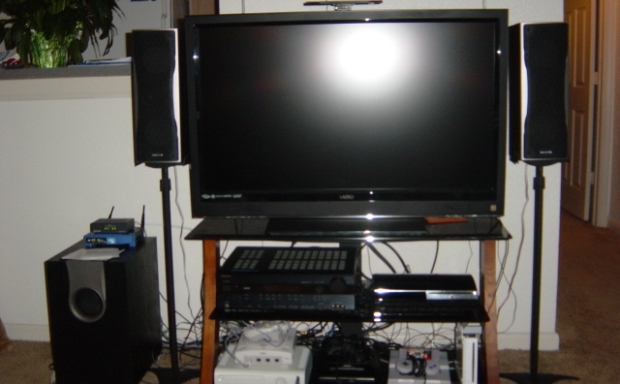 Today’s setup belongs to kauza. He’s got a pretty sizable collection and way too many books. Who reads anymore?! He also has a stuffed dog. Yeah … Hit up his Community Blog for more pictures of his setup.

Jonathan Holmes does TV, PAX East planning is GO, Half left made a Destructoid mosaic with all of the pictures from PAX 09, Animucast was born, the Double Down meme is born, we’re listing all Dtoid memes in the Forums and more happened in the Community over the past two weeks.

Check out this sick custom Destructoid themed fightstick that de BLOO is working on.

I love it when you guys show off your art skills and that’s just what Kapitan Pato did recently. These drawings were made for an upcoming brentalfloss CD, but brental didn’t like the style Kapitan was going for. I dig it!

The meat of the Double Down Brown Town sandwich gave us an update on the HAWP DVD.

SuitcoatAvenger keeps on putting out some awesome art like this random collection plus some new Street Fighter art as well.

It’s been over a year since BulletMagnet has been with the site. And in classic BulletMagnet form, he wrote a lot about his time here.

Jonathan Holmes is a sexy bitch.

GamingGoddess keeps on putting out some nice artwork. GamingGoddess also has her own podcast going. Here’s episode two and episode three.

Scion of Mogo needed a new banner for his Community Blog page so he commissioned Mikey to make this epic drawing.

The Forums have a couple of new sections up for Rev Rants and The Videogame Show What I’ve Done.

Drunkcast, the community driven podcast by a bunch of drunk fucks, episode 11 and episode 12.

PAX East 2010 planning has already began and the new Google Group is alive and kicking. Check it out!

Speaking of PAX, Half left made a Destructoid mosaic from the over 1500 photos taken at PAX.

power-glove makes a special cameo doing some karaoke in this Monolith/F.E.A.R. 2 video.

mimasurus joined the site by sharing some of her artwork with us.

Failcast, the community driven podcast driven by old time Dtoiders, episode 49. The crazies behind Failcast also debuted their new podcast series, Animucast. It’s all about anime and you can check out the first episode here.

Check out our latest ad campaign with OkCupid. It’s disturbing!

Faith shows off more of her pixelated creations.

y0j1mb0 is shameless in asking for fanart. This time however, garganroo made some fanart without being asked! Probably because old man Jimbo had no idea garganroo drew stuff. OH THAT’S RIGHT, OLD MAN! I’m calling you out!

A couple of new Dtoid memes were born this past week, one of them being Doubling Down. Krow, Phantomile, Gyrael and Conrad Zimmerman all show you exactly what Doubling Down entails. Actually, here’s a blog that has all of the Double Down stuff.

DtoidUK is getting together for Eurogamer taking place at the end of this month. Join up with the group to see what the Brits are planning for fun sexy times at Eurogamer.

DtoidNewYork is hitting up Capcom Fight Club this Thursday. They’re also going to have some Halloween plans and will be hitting up Blipfest too.

Check out the 24 hour comic that Matthew Blake created.

And on the subject of memes, check out the Forum thread listing all the memes that have been born or related to Destructoid over the years. What are we missing?