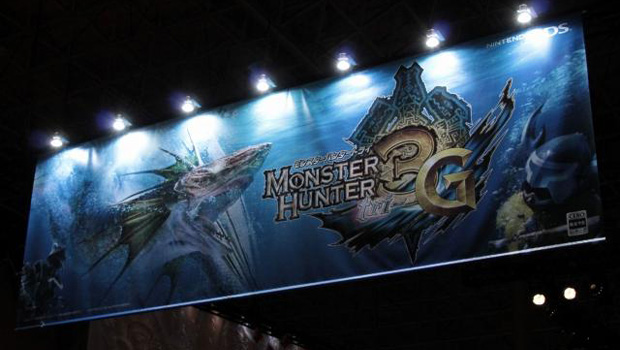 Several questions have been swirling about the latest Monster Hunter games for 3DS and their potential requirement of *rolls eyes* the new slide pad attachment. Since Monster Hunter is literally the biggest thing in Japanese gaming right now, there is no shortage of media covering the various ins and outs of the upcoming Monster Hunter Tri G.

I have gathered a collection of hands-on gameplay videos, and three things are immediately noticeable:

That’s right. All the demo stations for the game did not use the new slide pad, and somehow the game did not play like garbage. In fact, just from these brief videos, not only are the MonHun controls on 3DS functional, they are also incredibly fluid and demonstrably far superior to what PSP users were saddled with. It makes me wonder why anyone honestly believes a second stick is needed at all.

Hit the jump for more vids plus a brief explanation of the new controls.

Above is the official Capcom presentation for Tri G. Feel free jump to the 16:10 mark, where a lot of menu navigation is mapped to the touch screen. At 24:00 and 25:00, you can catch how to pull up quick-use items and customize your inventory respectively. It’s all very quick and intuitive, and since these functions are dedicated to the bottom screen, your view of the field won’t be obscured should you be in the presence of a very nasty critter.

More videos are available at Japanese sites Gigazine and Famitsu (you might need to copy and re-paste the latter link in order to load the page). None of the players seemed to have any trouble adjusting to the new setup, and I didn’t see a single instance of the dreaded “Claw” either.

What’s the “Claw,” by the way? It’s the very awkward control configuration on the PSP MonHun games that allows the player to manipulate the camera and move their character at the same time — the thumb would rest on the control stick while a curled index finger would rest on the D-pad. It’s a control style that I myself have employed in Mega Man X games, allowing me to shoot and jump with my right thumb and dash with my right index. Tri G solves that problem flawlessly.

Nintendo World Report noticed that Capcom had an English control manual on display, so they snapped pics of each page to post online. The most important page is the one above — a hi-res version is in the gallery — that marks the default commands mapped to each button and touch screen quadrant.

The biggest game changer, the Target Camera Lock-On, solves most of the viewing issues players have had in the past. When activated, you press the L button once to center the camera on the biggest monster in the vicinity and twice to center it behind the player. With this, players won’t have to fiddle around with the camera in the heat of battle, as a simple tap or two will make the necessary adjustments.

Of course, more precise camera control is still necessary at times (such as during swimming), and the D-pad still serves that purpose should any foolish souls wish to return to the dark days of the “Claw.” Although, why would you do that when a virtual D-pad is right there on the touch screen? Since the camera quadrant sits against the right edge of the screen, it can be easily accessed by stretching out your right thumb ever so slightly — try it on your own 3DS if you don’t believe me! It’s almost like… like… almost like a second stick without the need for an add-on!

Monster Hunter Tri G looks like an incredible portable game, and I know fans of the series are going to eat it up. The fact that it controls so well without the need for the reviled Nubageddon proves what I have surmised all along: the usefulness of a second stick when you’ve got a touch screen right there is vastly overblown. The slide pad is an OPTIONAL accessory that ISN’T mandatory, and its absence WILL NOT make games inferior. Okay? Okay.