Ezio once was king, but there’s been so much since then

There’s a reason Ubisoft kept making so many Ezio-centric Assassin’s Creed games: people bought them! But as Origins moved in and established a new broader formula, the series has continued to change with the times.

With the dust settled on Assassin’s Creed Valhalla, here’s the five best AC games, having played all of them. 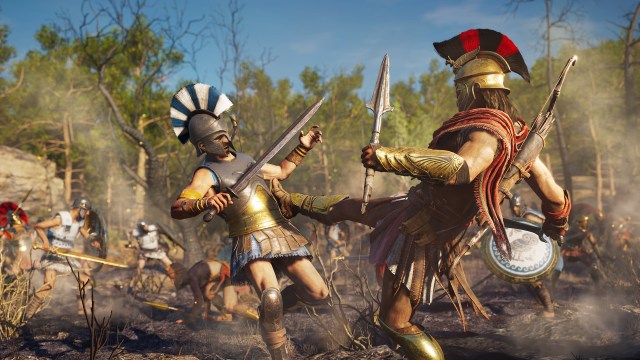 Giving credit where credit is due, Ezio actually does make this top five list (twice!).

While Assassin’s Creed 2 was somewhat polarizing in the wider gaming community, it’s also credited with bringing the series to higher highs; establishing the counter-based combat system that would eventually spread to other action adventure games. It was the blueprint for so much following it, and the Italian countryside is still impressive to look at: even with dated visuals.

Origins is where things started to change: depending on where you stand on the RPG bits, some would say for better or worse.

In any case, Origins was a bold move, and the setting of Egypt was requested by fans basically since the series began. It was a great match, and an interesting glimpse into an early point in the franchise’s overarching narrative of assassins versus templars.

Although Origins has such a strong and highly-sought-after historical setting, I think the majority of AC fans would agree that Odyssey took everything Origins did mechanically, and topped it in some way.

From quality of life upgrades to and even bigger and more sprawling Greece, Odyssey is a modern marvel of open world games in a lot of ways: packed with stuff to do, with the hindsight of tons of free updates to boot. The wacky DLC isn’t half bad either!

In 2013, Assassin’s Creed IV: Black Flag completely changed the perception of the AC series. Whereas a lot of folks avoided AC altogether, Black Flag brought in a ton of newcomers with its strong theme and score of sea shanties. It also started the “bigger” open world trend within AC, and when combined with ship combat, it felt more intense than most open world games at the time.

A lot of fans would likely put Black Flag or Odyssey at number one, but I went in a different direction!

You know, you were probably nodding your head the entire time thus far, but this is the one I expect a lot of people to disagree with.

A lot of technical strides have been made since the 2010 release of Brotherhood, and there’s a strict dichotomy between most series entries made before 2017: when Origins completely swapped the formula and added more open world and RPG trappings. But Brotherhood is the game I had the most fun with, and it has one of the most shocking turns within the “real world” meta-narrative.

It also came in an era littered with “forced multiplayer” as it was called at the time, and like Splinter Cell‘s experiments with PVP, it was actually pretty fun! While Brotherhood may not have aged as gracefully as some of the newer games, it’s still my favorite.