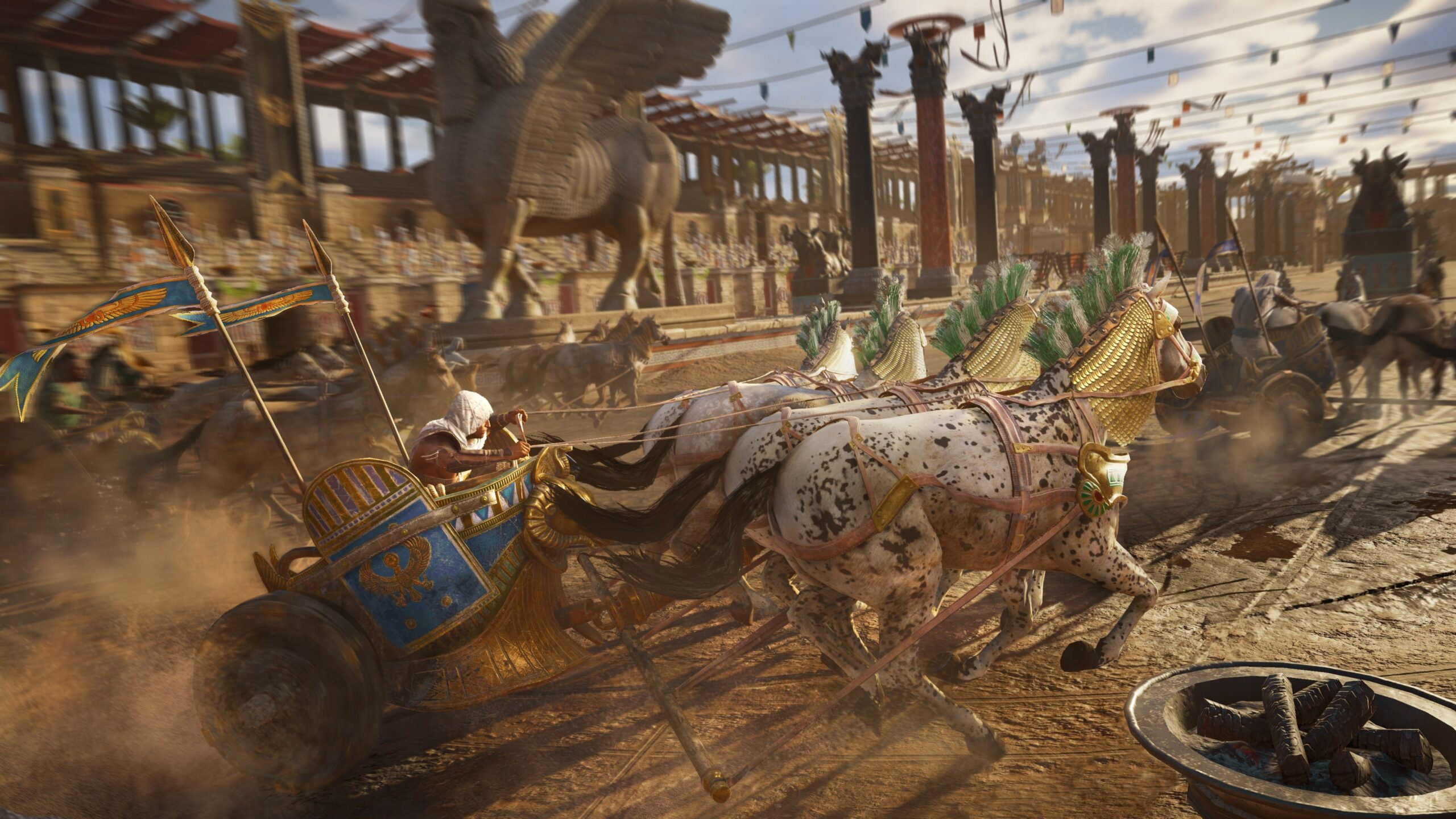 Most things are permitted now

I used to be able to not have to add that goofy “mainline” qualifier in, but the series has become so bloated with mobile spinoffs that it’s impossible to keep up with. You know it, I know it, and even Ubisoft knows it, which is why they opted to skip an entire year to lay low for a while. 2016 marked the first time in a while (2008) where there wasn’t a big annual Creed, which is kind of a big deal.

It’s refreshing that Ubisoft was able to exercise restraint, because Assassin’s Creed Origins benefits from eschewing the puppy mill style of game production.

Egyptian culture is so entwined with death that a killy assassin game just makes sense. I appreciated the elevated spirituality in Origins, which constantly takes beats from the various polytheist communities within, and wraps them into a setting that doesn’t feel as arbitrary as a few have in the past. I’m not going to act like I truly learned anything of value or got a free crash History 101 course in Egypt (though that functionality is coming), but at no point did Origins feel inauthentic, even when it was dropping fanservicey “origin” bits. Amazing vistas, hidden tombs, and architecture that differs from the rest of the series, or most open world games in general, are its biggest strength.

This time you’ll control Bayek an Egyptian that exhibits assassin-ey traits before the actual Brotherhood is formed. Initially, it’s just kind of jumbled, with that classic Assassin’s Creed in media res storytelling you’ve come to sigh at. Basically all you really take away at first is that Bayek is in trouble with the law, was formerly of the law, and you’re supposed to like him. Names like Rabiah and Senu are thrown around, and eventually take shape (the latter is your eagle companion, which allows Eagle Vision to actually make sense), as do pieces of his backstory that explain why he is the way he is.

What kicks off as a revenge tale eventually weaves into the historical events of Cleopatra’s exile, Roman influence on Egypt, and the mystery of the cult that Bayek has beef with. Despite the rough start it is engaging, and I found myself actually wanting to unravel said mystery yarn by yarn. Part of it is that Bayek is literally an outsider, even in his homeland, when juxtaposed to the Roman occupation. Instead of being kickstarted by an already badass Brotherhood, he’s mostly on his own.

After the token hour or so of an intro Origins will open up and you’ll be able to do whatever, with a very restrained amount of modern-day sections woven in — I’m talking maybe 30 minutes in total, tops, if you get right back into the Animus after the several interludes. Even most of the sidequests don’t feel like throwaway material, and allow for drunken street brawls or detective work. The latter has the tendency to pop up way too often (which is fine for the few bonafide mysteries, but not so much for the obvious “this guy was pushed off a cliff” Murder She Wrote wannabe tales).

There is PS4 Pro and Xbox One X support, the former of which this review is based on, and the latter of which I’ll be able to try eventually for our review of the hardware. As for my tests there were some moments where it felt like Origins was buckling under its weight on the Pro. You’re going to see goofy videos pop up starting today with various physics glitches (you know, the stuff people laugh at in GTA but condemn in other games), but it’s stable, and on PS4, I didn’t encounter anything that felt outright broken or unplayable outside of one crash where I lost 30 seconds of progress.

Combat has been heavily reworked with a From Software school of thought. You can now control your left and right hand separately (though the left is relegated to a shield), as well as dodge more freely without a sort of scripted dance to it. You’re also not spamming the same weapon type over and over, swapping constantly as you acquire more loot. A fully expanded swimming system that lets you dive for sunken treasure or boating skills that will see you fending off hippos and crocodiles are another fun way to traipse across Egypt.

Everything contributes to an experience system, which can feel gamey, but also more freeing in a way. Some areas have soft gates with level requirements, but you really can go wherever, and do whatever to get ahead and gain new abilities. More so than any Creed game to date I found myself wandering the countryside, hunting and taming animals for materials to craft, coming across fun sidequests. I like organically finding things instead of reading them on a tome and following a breadcrumb trail. Senu’s literal Eagle Vision is also a great way for Ubisoft to differentiate themselves from the apt Detective Vision comparison that they’ve run into the ground over the years.

Helix Credits, a currency used to buy new costumes, mounts, or gear, are allegedly only limited to in-game money and not real cash. While the Helix item store is live a suspicious “Buy more Helix Credits” option is not — if it does lead to microtransactions we’ll be sure to report on it. As it stands, my review session remained unaffected by any fear of loot boxes/loot box balancing. I was able to finish the campaign just fine without buying anything and by completing sidequests to level up.

I was really torn in assessing Assassin’s Creed Origins, as it hits several of the same lows as the rest of the series, with its sometimes uneven mission structure and janky physics. But given that they now have the formula down to a science and didn’t rush it out the door, all of that is a little easier to deal with than its predecessors. It was a big risk trying so many new things at once, but it worked, and the setting carries it.