Around these parts we’ve always dug the work of guitarist and artist Chris Kline, better known as “vertexguy.” Even in our earliest days we rocked out to his kickass versions of songs from Lords of Thunder and Contra, and we were also there to watch him shred at Video Games Live at GDC last year. And we loved his return performance at the E4All Expo’s VGL too.

Chris continues to rock, both professionally and musically. We caught up with him to talk about his new job at PAIN developer Idol Minds, his new music in Pinball Hall of Fame: The Williams Collection, and his upcoming performance at the Iron Man of Gaming festival. Oh, and we hear that he’s just finished up a negotiations with a major publisher to do a song for an upcoming AAA title.

Hit the jump to read our interview with vertexguy.

Destructoid: First off, what does “vertexguy” mean?

vertexguy: What? It isn’t obvious?! Ok…ok… so in my final year of college, I needed to create my online portfolio. Coming up with a catchy domain is tough, and I wanted it job related as a 3d artist. A vertex is basically a point in 3D space. Connect 3 of these points and you create a polygon (triangle). Polygons are used to create 3D objects. Since I’d be spending all my time manipulating vertices making 3d objects, I thought it would be appropriate to incorporate “Vertex” into the title. Adding “Guy” to the end seemed to be a decent fit and thus “vertexguy” was born. A lot of people break it up and call me “the vertex guy”. Either way works, but I prefer to keep it as a single combined word. You can’t have spaces in domain names, so keeping it together matches the site URL and makes search results a lot more accurate.

Okay…vertexguy, tell us your answer to the age-old question: Why game music?

I’ve always had a fondness for instrumental music. To me, the very core definition of music is expressing ideas and emotions through sound. It’s the one universal language everyone understands. That has nothing to do with words, which is probably why I prefer instrumentals. Game music has always been primarily instrumental, and regardless if it was a beep coming from my NES or a live orchestral recording from a modern Final Fantasy game, it has always intrigued me. Combine that with a childhood lust for playing video games, and it only made sense that I would be greatly influenced by the music contained within them. Unfortunately I don’t think the game industry gives enough credit to the importance of original music, and the impact it has on the player. I often find many game compositions are as good, or better, than anything you’d hear in a major motion picture. 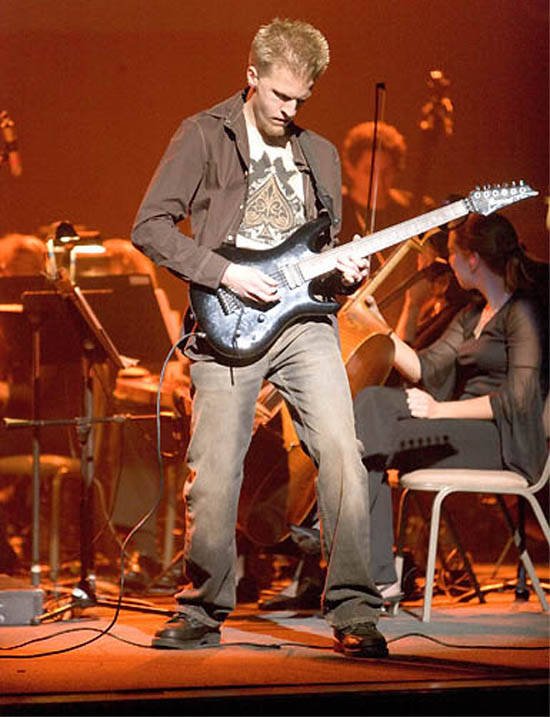 You’ve got quite a list of games you’ve contributed to. How did you start composing game music?

I’ve worked on over a dozen titles on the art side, but musically only on two so far. I started composing at a very young age using the MOD and MIDI formats. Later in high school I composed a few tunes for some independent game projects. Around this time I also started doing game remixes on guitar. After college I joined a Web site called Musician War and started competing, mostly with game tunes. My first published original game composition was produced during my time at FarSight Studios.

What was your role at FarSight? What did you work on?

I was initially hired on as an artist / assistant producer. It was a small studio, so I found myself taking on lots of lead responsibility, and working on multiple games at once. I quickly became the driving force behind raising the bar with new technologies and techniques. There was no audio department at the time, so I seized the opportunity and took on the role of Audio Designer as well. Unfortunately most of the games I worked on didn’t have a budget for a soundtrack, so I mainly worked on sound effects. Eventually an opportunity popped up to do a soundtrack if I could do it in a 2 week time frame. From this insane 2 week crunch emerged my first soundtrack to Pinball Hall of Fame: The Gottlieb Collection. The soundtrack was only 5 songs in total and fit a 70’s classic rock / funk style to match the time period of the game.

Speaking of pinball, tell us about your work on Pinball Hall of Fame: The Williams Collection.

The Williams Collection was probably my best work from my time at FarSight Studios. I did a large amount of artwork in the game and helped to push it way beyond the first installment in the series (The Gottlieb Collection). The end result is an extremely solid game that’s been getting pretty good reviews so far. On the audio side, I finally had an audio designer under me to help offset the load. He did a fantastic job at capturing and enhancing the soundscape of the original tables. Probably the best thing for me to come out of this game was the opportunity to finally produce a soundtrack with a small budget. Given that I had so much on my plate, I certainly couldn’t do it all myself. Luckily I know several amazing musicians on the net who I convinced to contribute for very little in return. I also managed to finish a new track from home so I could be a part of it. In my humble opinion, the end result was an incredibly kick ass 80’s soundtrack that’s very fitting to the time era in the game. If you like 80’s rock / metal, it’s worth hunting down online just for the music. At less than 15 bucks on the PS2, it’s a steal.

You’ve since moved onto a new job at Idol Minds. Can you tell us what you’re working on there?

Idol Minds has been a really great experience so far. They have some incredibly talented people that know how to make great games. PAIN is thriving with on-going expansions, but that project hasn’t been my primary focus. All I can say for now is that I’m the lead artist on a AAA title, due out sometime this year.

I know you’ve performed with VGL a couple of times now. How did that opportunity come about?

A while back a fellow MySpace user named “Stretch” contacted me and suggested I contact Tommy Tallarico and Jack Wall to see if they might be interested in doing something together. It just happened to be at the perfect time when they were planning for GDC. I’m very grateful for getting to be a part of this amazing show. Performing in front of Shigeru Miyamoto and Koji Kondo was an incredible honor that I’ll never forget. Since then I’ve performed at E for All, and have done several compositions for VGL on the side. I’ll also be making an appearance on their first greatest hits CD when it comes out. Although I can’t be a part of the regular tour, I do hope to continue playing gigs with them down the road. It’s always a blast to see a concert hall filled with fans who appreciate video game music as much as I do.

Speaking of performing, I hear you’re playing the Iron Man of Gaming festival. I might be there too. What do you have planned? Any chance we can rock out? Wait, on second thought, never mind; I suck. I can’t rock.

Sure man, I’m always up for a jam session! I suck at improv so you’ve got nothing to worry about. 😉 The Iron Man of Gaming event is something I’m really looking forward to. Craig from ScrewAttack.com was nice enough to invite me to perform my own set at the show, so how could I possibly refuse? I’ll be performing a very large selection of songs, including the highly requested “Duke Nukem Jam.” There might even be a new song or two in the mix…we’ll see what happens. It’ll definitely be an event you don’t want to miss!

I hear that you’re working with “a major publisher to work on a heavy metal theme song for their upcoming AAA next gen title.” Are there any details you can give us?

Just before I took my new job with Idol Minds, I was fortunate enough to be contacted by a fan who also just happened to be a producer at a major publisher. He loved what I did with classic game tunes, and was very interested in having me do a rock / metal theme song remix for their upcoming AAA next gen title. I can’t say much more at this time, but I’ll do my best to make it rock.

Is there anything else you’ve got coming up? Also, where can we find out more about you?

Over the past couple years I’ve been trying to improve my audio setup so I can crank out high quality tunes faster. Copying game tunes is quick and easy, but making it my own can be a real challenge. I’ve thought about doing my own solo album too, but who knows if I’ll ever find the time. As far as finding out more about me, I’d recommend my Web site at www.vertexguy.com. If you’d like to be the first to hear about new events with me, sign up for my newsletter on the site.

Geez…as if picking the best isn’t hard enough, I think crowning the worst is even harder! I’m gonna have to go way back and say the Immortal. This game was kind of a mix of RPG / Action / Puzzle. It had potential, but I remember getting frustrated with it and lost interest.

That’s easy…Pinball Hall of Fame: The Williams Collection of course! 😉 Hmm…seriously though, I think I’ll go with the Final Fantasy series. Nobuo Uematsu created incredible melodies that will be stuck in my head forever.

Anything from the NES / SNES CastleVania series….unless you’re asking about a game based around music, in which case…Guitar Hero!

Chris, thanks so much for taking the time to talk to us. Readers, be sure to check out his latest release, “Premonition,” straight from the soundtrack of the Pinball Hall of Fame: The Williams Collection.