With ’80s icons and violence

I was sliding across the floor — or more precisely, my dapper, gentleman cyborg warrior was sliding across the floor — though I wasn’t sure why exactly. The reasons didn’t matter, as sliding is simply fun. I slid right through a door, and started to fire round after round from my oversized hand-gun. Yippee kay-yay mother— I was sliced in half by a sunglasses-wearing monk wielding an energy blade before I could finish my battle roar.

The Showdown Effect is immensely silly. It’s a smorgasbord of ’80s tropes from cringe-inducing one liners and larger-than-life caricatures, to sanguine gore and flashy violence. That analysis is merely surface-deep, however.

After only half an hour of deathmatch shenanigans, it became clear that this ultra-violent multiplayer deathmatch bonanza is also a precise, skill-based affair that draws from a broad pool, including Super Smash Bros. and GoldenEye, the two games that Arrowhead CEO Johan Pilestedt cited as major inspirations for the game.

Playing The Showdown Effect in a room with 20 or so other journalists was an interesting experience. Being an online PC title, most folk will be playing it in their rooms on their own, only connected to other people via the witchery of the interwebs. Playing it in an auditorium, however, made me feel like I was in everyone’s study, bedroom, living room, or wherever they house their PC, listening to them all yell, hoot, curse, and exclaim as they decapitated a foe with a double-bladed axe or stabbed a chap with a crucifix.

Have no doubts about it, when you are playing this online, your headset or speakers will be filled with such noises, and you’ll find it hard not to revel in it. It’s impossible not to just get carried away with the mayhem.

As I leaped from my perch on the level above two slowly moving foes, bringing down my massive hammer on top of them, squashing one with a satisfying splat, then dispatching the other using my pistol as I scrambled up a wall to make my escape, I kept thinking “Damn, maybe I should be taking notes.” But I was far too busy enjoying myself. 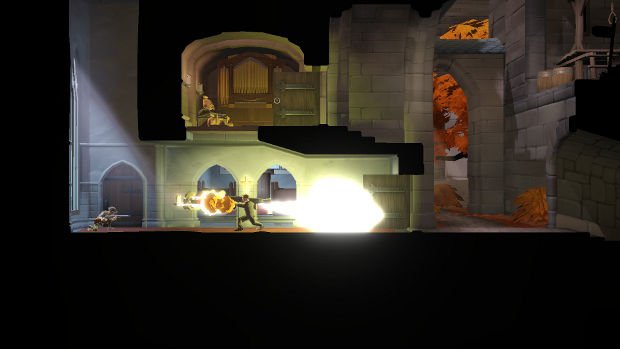 Half an hour isn’t really long enough to become proficient in a game that’s as surprisingly nuanced as The Showdown Effect, but thankfully when you are playing against other people in the same boat, things balance out. The shouting and laughter was punctuated by questions like, “How the hell did I do that?” More than once such queries were uttered by yours truly.

I confess that I beamed with pride when I saw my score at the end of a couple of matches, more due to the sheer surprise that my luck held out. I’m not exactly good at killing stuff. It’s the sort of game that gives players plenty of opportunities to pull off some really crazy moves even while they are still getting the hang of things. I got to decapitate Paradox Interactive CEO Fredrik Wester on more than one occasion, and he’s demonstrably more badass than I.

The comparisons to the N64 classic GoldenEye may seem a little odd, but the inspiration Bond’s greatest videogame outing has had on The Showdown Effect is actually very significant. Levels may not be nearly as expansive as those found in the beloved shooter, but they are unexpectedly complex, and filled with interesting nooks and crannies, begging to be explored, memorized, and eventually exploited. The game goes even further by making the environments extremely interactive, from the walls that can be slid down or climbed up — all the while shooting at enemies — to elevators that can be used to make quick getaways. 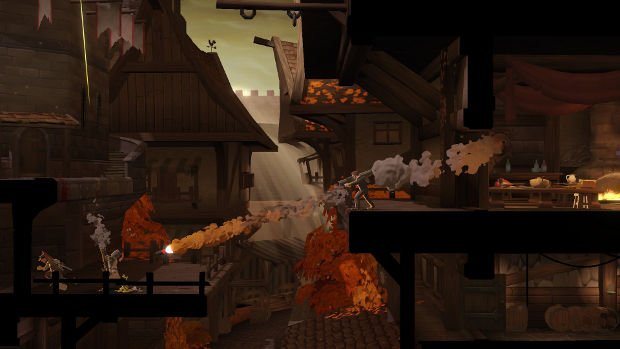 The level of customization also harks back to titles like Smash Bros. and GoldenEye again, and Arrowhead promises a myriad of options such as one-hit kills, rocket launchers only, no extra weapons, and a whole bunch more to fine tune one’s multiplayer experience. Will there be a big-head mode? I admit I forgot to ask. Next time I won’t be so remiss.

Ah yes, the weapons. The lovely, deadly, brutal weapons. Character loadouts can be selected before each match, and on top of each character’s special ability, two weapons can be selected. This, however, does not mean that players are restricted to this initial choice. All over the levels are a plethora of obvious weapons from axes to hammers, as well as less obvious things like cushions, chairs, shields, and even God’s own passive-aggressive weapon of choice, the crucifix.

Weapons within a particular class are all identical beyond their visuals, but each class is separated by things like their weight, speed, and damage. Some like the cushion or the chair are more defensive in nature, allowing players to block attacks and push foes back, or, indeed, off ledges. 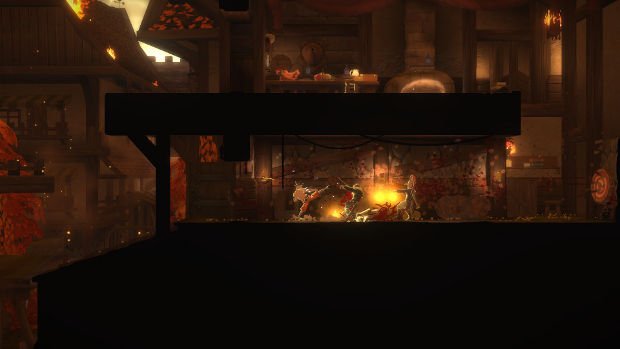 The player classes work similarly, in that they are all identical beyond their appearance, personalities, and their unique special ability. Johan Pilestedt explained the decision to make all characters equal. “We wanted the game to be really skill-based, like in GoldenEye when you got to choose a character. The ability that each of the characters have was originally a tech item that you could attach to each character, but instead of doing that, we thought we could just integrate that into the character and have a hero ability itself … We didn’t want to alter the game too much, but we also want you to get the feel of playing a specific hero.”

The two modes shown off in the hands-on session were the Showdown mode, The Showdown Effect’s take on the deathmatch mode, which had a twist with last man standing, and Team Elimination — which I absolutely loved. Small details like the team names and team poses really added to the delightful cheesiness of the experience.

In Team Elimination, your team loses when all members are dead at the same time, and each time an individual perishes, their respawn counter increases. It made for some horribly intense moments that crescendoed in nerve-racking chases and entire teams of four stalking a solitary survivor. It reminded me of the original Die Hard, with McClane sneaking through that glass and steel tower, hunted by an army of terrorists — and he didn’t even have his shoes!

Johan’s inspiration for those moments came from an unlikely source. “We took a lot of inspiration from League of Legends and DOTA when you’re trying to gank somebody. You eliminate two of their team, and then they start falling back because they’re out of power — we wanted to get that chase going, and also that’s inspired by ’80s movies because there’s always a chase.” 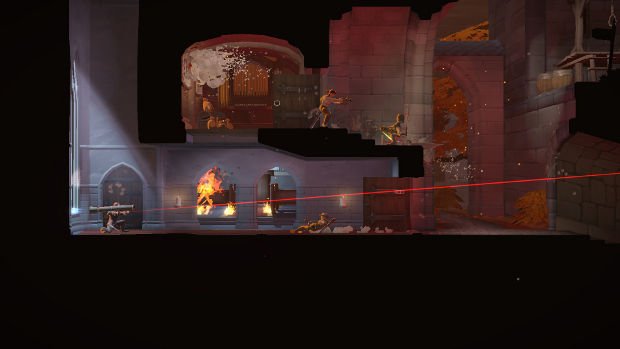 Given the relationship between Twitch.tv and The Showdown Effect (players will be able to stream their games at the press of a button at the start of a match), and the skill-based gameplay, there were more than a few people wondering if some e-sport stuff was in the cards for the title. This doesn’t look like it will be the case, however, as Arrowhead wants to focus more on fun and straight-up entertainment than competitiveness and long-term rivalries.

At a time when fuddy-duddies like Warren Spector bemoan the violence so prevalent in our industry, The Showdown Effect reminded me that what’s most important is that games are fun. Making a facsimile of John McClane slice open a monk dressed up as an extra from The Matrix with a sword from the future is definitely the type of fun I like.