Scribblenauts Unmasked: A DC Comics Adventure coming to the PC, Wii U, and 3DS

Maxwell and Lily’s next Scribblenauts adventure sees the pair venturing into the DC Comics universe through the power of their magic notebook. The siblings love comics, and the whole reason they even want to enter DC’s universe is to see who’s better between Batman and Superman. The Scribblenauts heroes quickly learn that there’s a far greater issue at hand and they’ll need to help all the DC’s heroes out in this new adventure.

While this is all very heavily focused on the DC universe, the same Scribblenauts mechanics and gameplay systems are in place. DC Comics fans are especially going to like this one as it’s not just The New 52 characters featured in Unmasked. This is a giant sandbox featuring over 2,000 DC characters, vehicles, locations, and more that ranges back to even obscure stuff from 1976.

Scribblenauts Unmasked will take you to a ton of different DC locations. In the demo we saw, Maxwell and the various heroes are hanging out in the Batcave. These locations are faithful representations of DC environments, and there’s a surprising amount of depth to them.

Characters you come across in these levels will also have quests for you, called Heroic Feats in the game. Every time you enter a level a new procedurally-generated puzzle will be presented to you. These dynamic Heroic Feat events are always going to be different no matter how many times you enter the same level. One example of how this could work is Batman becoming paralyzed at the hand of some villain. You have to save Batman as Maxwell by getting him an antidote, and once revived Batman will take care of the villain. 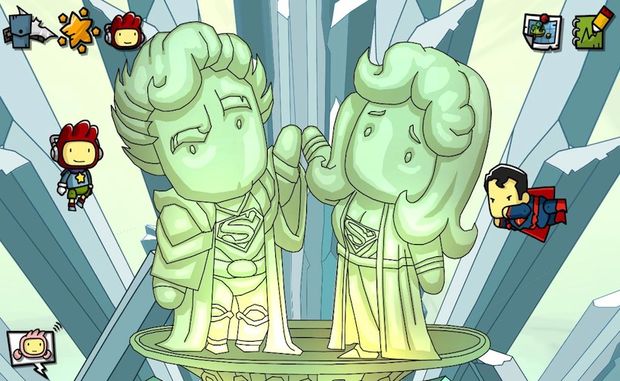 There’s a ton of DC characters here; like, it’s crazy. To put it in perspective, there are 33 different Batmans and 133 Green Lanterns. At one point we saw a giant room filled with DC heroes and villains like Superman, Batman, Joker, Wonder Woman, Darkseid, Cat Woman, Sinestro, Green Lantern, Flash, Abin Sur, James Gordon — even freaking Mogo, the living planet that’s a Green Lantern is featured here.

Later in the presentation 5th Cell let loose the nearly 100 characters all just hanging out in the demo stage where a giant brawl erupted. Adjectives can still be applied on characters, so you can totally call in a zombie Batman into the middle of the fight where he will attack others, which will also slowly spread the zombie virus, thus eventually turning everyone into zombies.

If that’s not enough you can even create your own superhero in the Hero Creator. You know, in case you get sick of the 133 Green Lanterns or something. You can mix and match parts of different bodies from the DC characters, plus apply different superpowers to them and create some freakish Frankenstein of a hero.

There’s a giant Wikipedia-like system that will give you biographies on everything in the game as well. It’s accessed via the Batcomputer and will be a big help as you try and sort through everything that’s available.

Really, it’s the same Scribblenauts you know and love, just overloaded with a ton of DC goodness. You can expect Scribblenauts Unmasked: A DC Comics Adventure to be out this fall for the PC, Wii U, and 3DS.