I bet Sony is kicking itself (in its butt) over its inability to wrangle up a Monster Hunter game for the Vita. Despite promising a Monster Hunter game would come to Vita in 2012, the system is barren when it comes to that fast-selling franchise. You need only peep the handy infographic below to realize the hit Sony is taking.

This data pits the total retail sales of every Vita game in Japan against the retail sales generated by the Monster Hunter series, which is sitting happily on the Nintendo 3DS. Yikes. Oh, and those Monster Hunter 4 sales? The game released in Japan last week. Its 1.71 million retail copies sold alone almost match the number of Vita console sales in Japan.

For as grim as that graph looks, nothing can dull my enthusiasm for the console after a Gravity Rush sequel was just confirmed. I love that game so much; it alone would have made buying a Vita worthwhile. But, yes, having Monster Hunter would clearly benefit the handheld’s continued existence.. 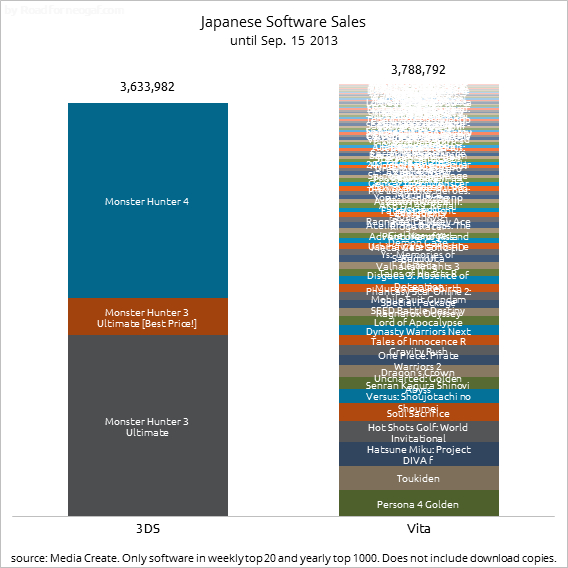