For years, gamers have waxed poetic about how certain videogame moments have made them cry. Whether it is killing off a beloved character or presenting a poignant plot twist, it seems more and more games nowadays are trying their best to get the most hardcore gamers around the world to shed a collective tear.

But, in all honesty, how many games have resulted in actual, physical sobbing? Getting a little extra emotional or slightly teary-eyed during a scene is a whole lot different than actually letting the waterworks flow.

While I would definitely agree that there have been numerous virtual moments over the years that have got me pretty choked up (heck, most of these Memory Card moments fall in that category), there has only been one specific sequence in the history of videogames that has resulted in actual tears emitting from my eyes and streaming down my ashamed, horribly embarrassed visage.

Let’s experience one of the saddest and most touching videogame moments ever from one of the most unlikely of candidates, Elite Beat Agents for the Nintendo DS.

I know, I know – please try to contain your laughter before continuing on … just trust me on this one …

For those of you not familiar with the greatness that is Elite Beat Agents, let me explain the basic premise: Elite Beat Agents is a rhythm game on the Nintendo DS that has you tapping, sliding, and spinning your stylus to keep the beat with a handful of popular songs.

While this main rhythm-centric gameplay sounds almost too basic to be engrossing, what makes Elite Beat Agents extra unique is how each “level” is presented.

In the game, you play as three members of a fictional government agency who are assigned to help people in their time of need. But instead of helping these troubled citizens directly, the agents use their power of dance and song to motivate each individual to perform whatever task he or she is having trouble with. I know, it sounds pretty ridiculous, but the concept suits the game perfectly. 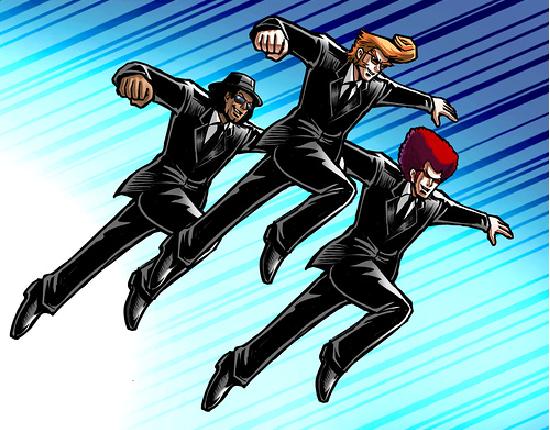 Each level in Elite Beat Agents is a different song, and at the beginning of each song a cutscene sets up the story. The cutscenes are presented as amazingly well-done comic book style vignettes. The art work and direction is really spot-on and really sets the perfect tone for each level.

Throughout the entire game, the agents are involved in mostly lighthearted moments. From a guy asking for help scoring a winning touchdown to a babysitter needing assistance taking care of a gaggle of kids, each level offers jovial storylines to go with the usually upbeat songs. 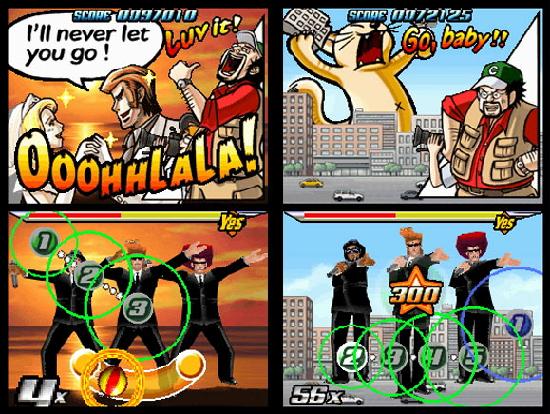 Not to get too off track, but to say the game is addictive is an understatement. Even when certain songs are presented that are almost unknown or, even worse, ridiculously cheesy (*cough* “Y.M.C.A.” *cough*), having the entire sequence bookend with these awesome little stories makes the entire experience surprising and very entertaining.

of this harmless merriment pretty much guarantees you will have a huge smile on your face when playing Elite Beat Agents. Its goofiness and genuine appeal is nothing short of intoxicating.

But as the game nears the end (and your head bobbing and toe tapping have reached maximum levels), one sequence comes out of nowhere that really throws your emotions for a loop.

It is with great humility that I present to you all the next Memory Card inductee: the “Christmas gift” sequence.

As one of the later levels starts, the tone changes considerably. Instead of a wacky, over-the-top character doing something even more wacky and over-the-top, the traditional opening cutscene begins by showing a little girl, Lucy, right before Christmas, saying good-bye to her father, Mr. Stevens, who is heading off on a last minute business trip. 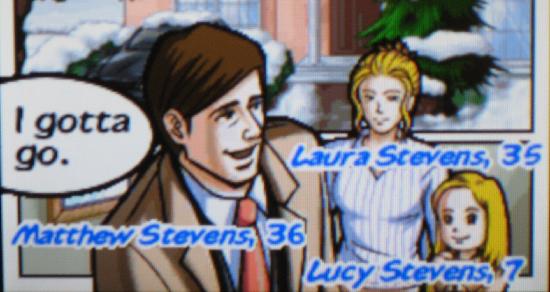 The little girl’s father has his cute daughter make a wish to Santa about what she wants as a gift for the upcoming holiday.

After thinking for a second, Lucy holds up her stuffed bear and says, “A girlfriend for Teddy.”

Smiling at his precious girl’s response, Mr. Steven’s says a final farewell and walks out the front door, promising his wife and daughter that he will be back by Christmas.

It is with this that the scene fades out … 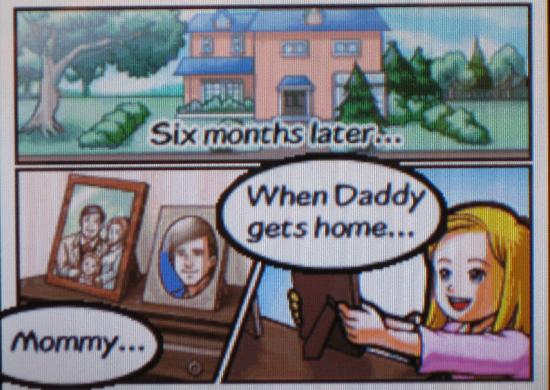 Cut to six months later: Lucy picks up a picture of her father on a side table and asks her mother when daddy will be getting home. Mrs. Stevens, her mother, mildly scolds Lucy, asking her to not talk about her dad.

It is this moment when you find out that Mr. Stevens was in an accident (assumed car crash) when he left on his business trip months ago and was killed. Obviously, he never made it home on Christmas to spend the day with his loving family.

Lucy then proceeds to yell at her mother, confused as to why her father promised to come home and never did. Mrs. Stevens, distraught and overwhelmed, retreats out of the room, leaving her daughter all alone with her ridiculously sad thoughts. 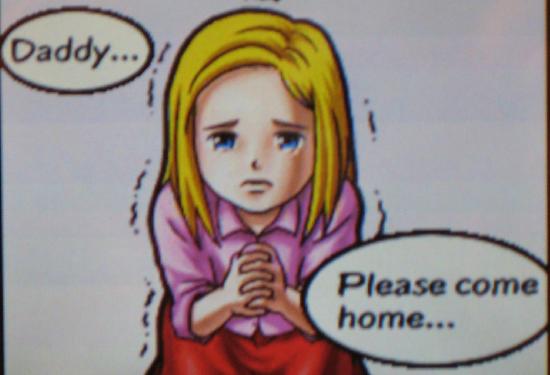 No joke, Lucy then actually looks to the sky and says, “Daddy … please come home” as the cutscene fades out … (are you kidding me with this, Nintendo?) …

On this morbid note, the playable level begins, this time to the song “You’re the Inspiration” by the band .

Like always, the agents leap into action as they try to help Lucy mourn and get her ultimate wish: to see her father one last time. 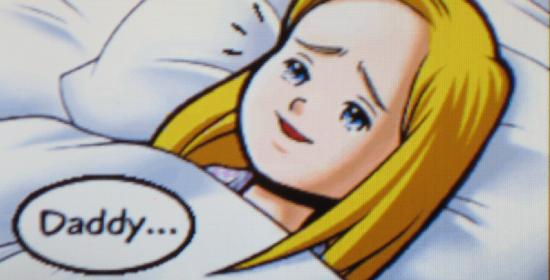 One thing that is cool about Elite Beat Agents is, as you play each song, there are small breaks that continue the story on the top screen. Depending on how many points you score and how well you have kept up with the beat, the story will reflect your in-game performance. If you do well, things go great for the character you are trying to help – do poorly, and your assignment runs into some unfortunate luck.

Needless to say, when you are trying to control the emotions of a little girl who has just lost her father, you have a lot of motivation to do well and make sure she is happy.

Assuming you are playing like a pro, the first break in the song shows Lucy and her mother cleaning the late Mr. Stevens’s room. As they pick up one of his books, a picture falls out. 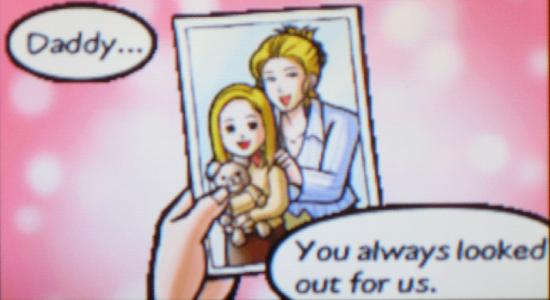 When Lucy and her mother look at the picture they realize that it is a photo of them. Mr. Stevens obviously loved them very much and always wanted to keep a picture of them with him at all times.

The in-game cutscenes get more heart wrenching as they go along. Taking place over a time span of a few months, one story sequence has Lucy baking a cake for her deceased father on his birthday. If you are doing well in the song, a starry breeze will come through the kitchen window, blowing out the candles that Lucy lights on the cake. It is at this moment that Lucy, almost teary-eyed, responds with a quiet “Daddy blew out the candles!” 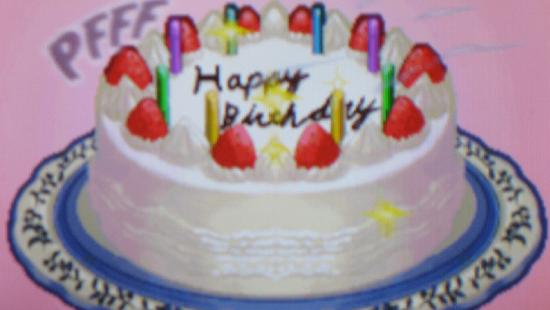 As “You’re the Inspiration” finally comes to a close, and after all of this, the next Christmas finally rolls around, with Lucy and her mother decorating the tree.

Suddenly, there is a knock at the door. Surprised, Lucy and her mother look up and see the ghost of Mr. Stevens standing in the doorway. And, of course, in his hands he is holding … wait for it … a stuffed bear girlfriend for Teddy, wrapped and ready to be put under the tree.

*curled up in a ball on the floor, shaking* 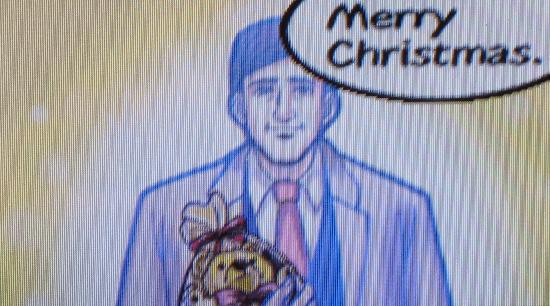 As the newly reunited family embraces, the level comes to a close, ending one of the most emotionally out-of-nowhere moments in the history of videogames. 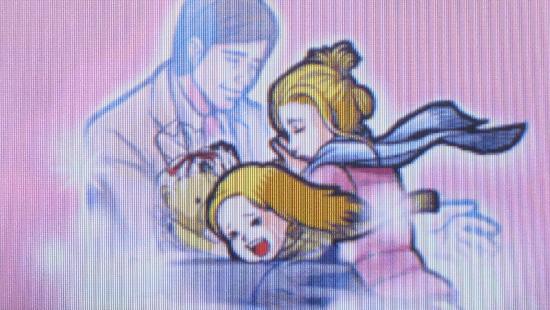 Open your jaded, cold heart for a second and check out the entire sequence here – hopefully you will agree that it packs a pretty surprising emotional punch:

I can’t necessarily say I hate the band , I just never really knew enough about them to warrant a solid opinion. Sure, I had heard some of their songs, but I never really thought twice about the chart-topping group from the late ’70s and early ’80s.

Well, after playing Elite Beat Agents, I really can’t hear one of their arguably biggest hits, “You’re the Inspiration,” without bawling like the little girl I am.

Seriously, I don’t know what it is about that scene, but it gets me every time.

And it really shouldn’t! Every single awful cliché is in full effect during this entire level: from the sappy song to the doe-eyed, helpless girl losing her loving father – from the opening, dramatic good-bye to the final shot of the two teddy bears together. I have no idea how this sequence actually works and doesn’t come across as being the cheesiest thing, well, ever. Heck, that alone is reason enough to triumph it as a success. 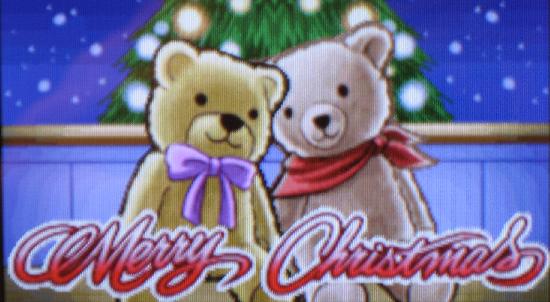 Breaking the scene down — if you are a fan or have at least played Elite Beat Agents in the past, you must know that there are certain “triggers” you tap with your stylus that make a clapping sound that goes along with the song being played.

One thing that is cool about this scene (and helps make it work so perfectly) is that those loud, distracting claps are replaced with soft, melodious chimes that only add to the touching mood of everything happening on-screen. Really, the tone of the entire game (even down to the little gameplay details) is flipped on its side during this sequence.

Another reason this scene really stands out as being almost (again, try not to laugh) revolutionary is that it occurs in a musical rhythm game. Think about that: a game akin to something like Dance Dance Revolution that actually has the power to elicit a genuinely emotional response out of the player? That is pretty impressive and an obvious testament to the power that even “simple” videogames possess.

While most people may shrug this scene off as nothing but fluff, I have an intuition (and some shaky confidence) that there are others that feel the same awkwardly-timed emotions when playing this “Christmas gift” sequence.

Although I am a little (translation: very!) embarrassed to admit I actually cried while playing this level, that doesn’t change the fact that this is an unbelievably powerful sequence (especially for a handheld videogame!) and really will be remembered as one of the greatest videogame moments of all time.