Tonto, jump on it

Prior to the E3 festivities, Disney demonstrated the upcoming cash grab Disney Infinity to a room teeming with journalists. The focus of the event was on two of the in-game worlds plus the oft-touted Toy Box mode.

The first world, based on Pixar’s Monsters University, has been discussed before. The second world, based on the Gore Verbinski revival of The Lone Ranger, was only announced a few days ago and was thus the bigger draw. I was ready to hop on Silver and ride like the wind.

Prior to today, my only knowledge of Disney Infinity was what was covered in our hands-off preview a few months ago. Now that I’ve been able to play through some of the game for myself, I’m having reservations about Disney’s unbelievably high ambitions for the nascent franchise.

As mentioned before, half of Disney Infinity involves visiting various Disney movie worlds and going on whole new adventures in those worlds. You plant a special environment token and a character figurine atop a very Skylanders-esque pedestal and get whisked away.

Unfortunately, you are limited to using only the characters native to that world in order to preserve the appropriate atmosphere. The mixing and matching is thus reserved for the Toy Box, a free-form mode that is essentially a fusion of LittleBigPlanet, Minecraft, and the mighty Disney money machine.

But before we jump into that, let’s talk the Lone Ranger playset.

The Lone Ranger and his Indian partner Tonto must drive off the outlaw Butch Cavendish and his men from the small town of Colby, Texas. Encircling the town is a train, unable to break out of its loop until the bridge leading to another area is repaired. To repair it, you must earn coins, and to earn coins, you must take on missions.

Swapping the two heroes at your leisure, you battle Cavendish’s posse with your pistol / tomahawks. By tapping the left trigger and the maneuvering the right control stick, you can even play out your firefights like a third-person shooter. As you defeat foes and collect loot, you also accept missions from townsfolk noted by big glowing question marks above their heads.

Sometimes you’ll be asked to do something as simple as hit a target with your weapon. Other times you’ll have to run errands, such as acquiring TNT or retrieving a woman’s husband who has gone missing near the mines. These missions may link to one another, and you could find yourself on a side quest chain reminiscent of Zelda games. 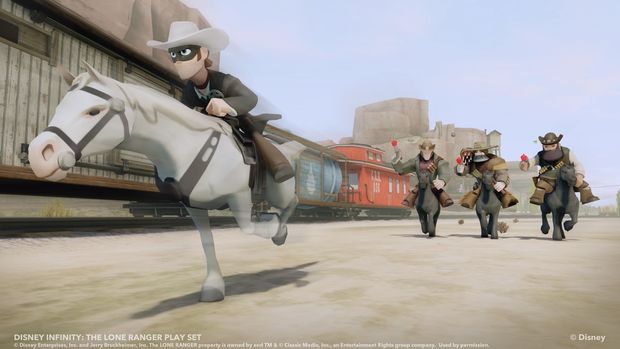 Throughout your campaign, you are constantly reminded that this is a fun toy world and you have access to god-like creation tools at a moment’s notice. Should you cause collateral damage to the town, a simple press of the button will restore the buildings to their former glory. If you want to build that bridge, you can open an item menu and purchase the bridge or other goods, all which will instantly generate in the field like magic. Finally, you’ll find plastic vending machine capsules floating about, their contents which include in-world tools or more goodies for the Toy Box.

The Monsters University world is a little different in that you are engaged in a prank war with the neighboring school, Fear Tech. You can approach certain structures on the campus, press a button, and pull up a menu that allows you to swap the structure with stuff like spring-loaded easy chairs or boxing glove-sprouting phone booths, linking them together to form one big Rube Goldberg prank machine.

The demo station running the Monsters University world was doing so on the Wii U, so I had a chance to check out the GamePad features. Aside from some hotkey shortcuts, the parts selection menu that would normally appear on the bottom of the screen appears instead on the GamePad. There really isn’t any benefit to this feature, and I found it rather pointless. 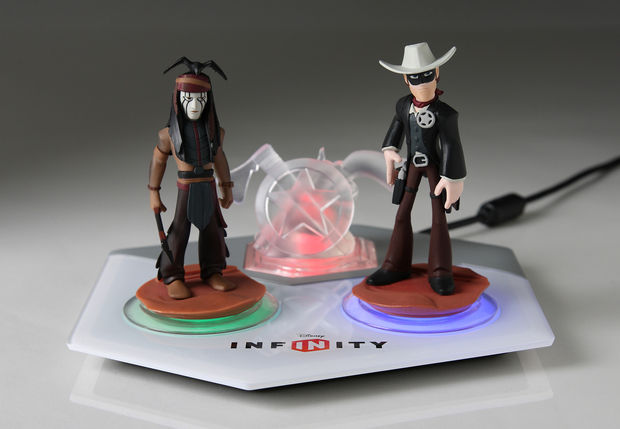 The other half — and Disney Infinity‘s main claim to fame — is the robust Toy Box mode. The world is a blank canvas upon which you can drop Tron vehicles, generate environments from Wreck-It Ralph, and more by placing hexagons into the pedestal. You can actually stack multiple hexagons atop each other for chained effects. For instance, by placing two additional hexagons underneath Jack Sparrow, he’s granted power-up buffs or bonuses.

You are free to write your own logic rules in Toy Box, so you can create something like a one-on-one fighter, a racing game, or a soccer match. And with all the pieces you earned from the main mode, along with pieces and characters generated from the pedestal, there really isn’t any limit to what you want to do.

This needn’t be a solitary experience — two players can use a single pedestal and interact via split screen, or you can take the adventure online with three other players. Furthermore, the games, environments, and structures you create can be uploaded to the net, where they will be curated and offered to other players the world over for download.

There is seemingly no end to what can be accomplished in Disney Infinity, and it is for that very reason that I am wary. Unlike Skylanders, which is a basic hack-and-slash dungeon crawler albeit with colorful figurines you can buy, Disney Infinity seemingly defies any simple explanation. I can see there being a very big challenge in conveying the nature of the game to kids — hell, even I’m a bit confused as to what Disney and developer Avalanche Software are trying to accomplish. 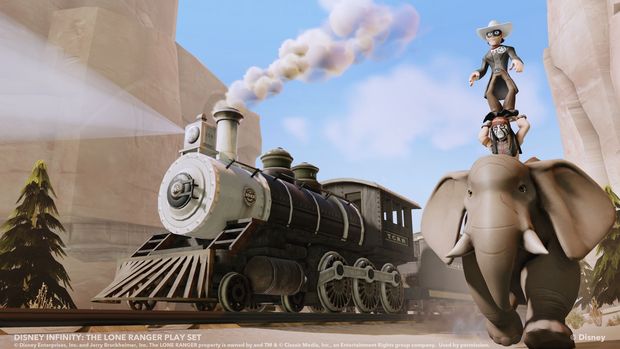 The new trailer further up the page runs down a list of scenarios and game types possible within the Toy Box. I see it as a checklist of features that Disney wanted in the game, no matter how poorly they wind up being implemented. As it stands, a lot of the features — right down to the clunky platforming controls — feel incomplete. How much of the game can Avalanche improve before its target release in August?

Others are really excited by Disney Infinity‘s potential, but I personally haven’t been pleased thus far. Maybe I just need more hands-on time before the concept clicks. That’s what E3 is for, after all.