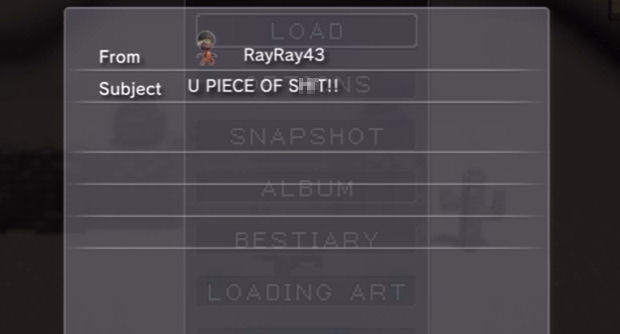 Nothing gives me more joy than this job. It’s a dream career, albeit a fairly ludicrous one. You mean, somebody pays me to tell other people what I think about videogames? That’s the stupidest job in the world! Nobody is more happy to confess how silly his career is than I am, and nobody is more willing to admit that his place in the world is, ostensibly, useless. I mean, what does a game reviewer contribute to society? Not a lot, my friends. Not a lot.

We try never to take ourselves too seriously at Destructoid, so it’s amazing how willing other people are to throw melodrama and serious business at us like we’re the most important Web site online.

It’s funny that a lot of people think that we, and myself especially, do what we do for negative attention. According to who you ask, I lie about my opinion on certain games just to drum up controversy. Nothing could be farther from the truth. I appreciate that this article will fall on deaf ears, but nevertheless, I’d like to demonstrate exactly why my reviews aren’t simply trolling.

Because at the end of the day, nobody likes getting abused by morons. 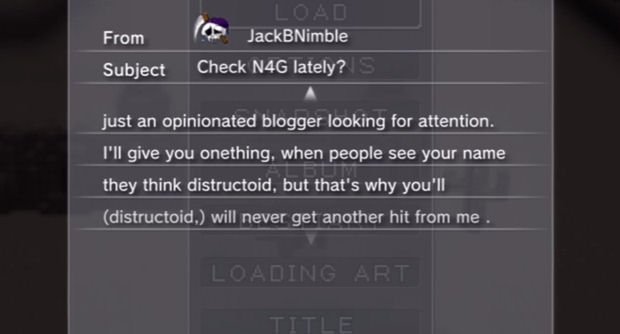 Let me explain something to you, for anybody struggling with the concept: Being insulted at your place of work actually isn’t fun. Nobody here at Destructoid, or anywhere else in the games reviewing medium, actively enjoys receiving messages from people who hate them. When you fire up your PS3 to play 3D Dot Game Heroes, only to see that your PSN inbox is full of harassment from PS3 fanboys who whipped themselves into an abusive frenzy on N4G, it kind of makes you feel sad at the world.

Don’t get me wrong — it’s not like the abuse itself hurts our feelings. Destructoid’s been in this business for four years. We’ve had endless streams of haters. Some sites refuse to link our stories; some communities ban mention of our name. To say we’re used to being disliked is an understatement. However, there’s no satisfaction to be taken from reading a stream of personal, venomous statements belittling everything about you, from the way you look to the way you do your job — all because you publicly said something about a videogame.

The fact of the matter is this: I don’t like shitting on games. Again, very few people in this industry do, and only an insane person would get a positive emotion from negative feelings. We review games because we love them. We love to talk about them, and we love to share a great game with our many readers. It gives me no joy to take a game, sometimes knowing the people who made it on a personal level, and provide harsh criticism.

The latest game to draw anger and fanboys like flies around shit was, of course, Final Fantasy XIII. Let me provide you a little background to myself as a gamer, my history with the series, and the lead-up to that review. 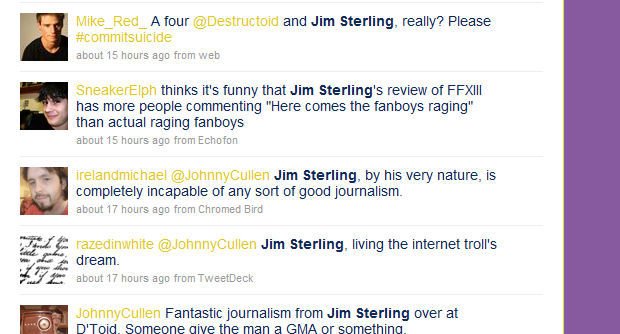 I love Final Fantasy. I don’t talk about the franchise often, and as such, a lot of people don’t think I’m a big player of the games (in fact, a few questioned my ability to review XIII because they felt I had no experience with JRPGs). However, I adore those games. Square Enix is the reason I first took videogames seriously as a way of communicating narrative interactively. Final Fantasy IX is one of my favorite games of all time. I even have a soft spot for the always-polarizing Final Fantasy VIII. X-Death is among my top game villains. Zeromus is still my most hated enemy. Final Fantasy XIII was a game I had spent five years looking forward to.

My time spent with Final Fantasy XIII was miserable. As I publicly stated ahead of the review, I felt I’d seen enough at the end chapter. I didn’t finish the final boss (though I have seen the ending), which some people took issue with, and we’ll get to that in a moment. In any case, when I decided it was time to write the review, I wasn’t smiling. I didn’t rub my hands together gleefully and anticipate the volley of abuse I was going to receive. To be honest, I felt down when I saw the review finally hit the front page. I got no pleasure out of unceremoniously ravaging something produced for one of my favorite videogame franchises.

Then there’s the potential fallout with Square Enix. Someone asked me, angrily, if I expected Square Enix to care about what I said. Actually — and I’ll be totally honest here — I don’t want them to react at all. Square Enix is a company we’ve struggled long and hard to build a relationship with. I’ve only very recently started to make contacts there, and those contacts are loose associations at best. With that in mind, after several years of hard work, do you really think I had fun pulling the publisher’s premier 2010 release apart? Fucking no, I did not. Square Enix still hasn’t reacted to my review, and I don’t know yet if my contacts are mad at me. But again, I must reiterate that waiting to hear whether or not you’ve been blacklisted isn’t something I’d place high on my list of hobbies.

Does that sound like somebody who does this for the sheer fun of it? 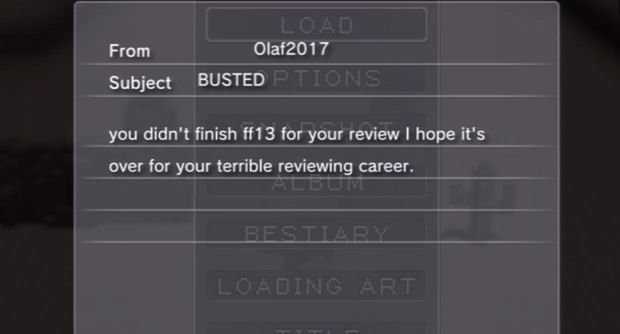 Here’s another image from my PSN inbox. If you think anybody goes out of their way to write a full review as a joke, just so he can get people crossing personal lines like this, you’re a fucking idiot. As you can see, this is one of the Internet detectives who recently realized you can check someone’s Trophies to see how far they got in a game. Oh, shocker! One guy (who clearly wants to foster good relationships with his peers in this industry) even wrote a whole blog about it on some Web site, as if he had stumbled across a great discovery.

Sadly for this guy, my career as a reviewer is not over. I reviewed the game within our guidelines (get close enough to completion to feel we can review the game adequately — in this case, slightly before the final boss), and I’m not going away. Destructoid will continue to risk angering publishers, have a miserable time playing games we don’t want to hate, review games the way we want to, and have our emails, Twitter feeds, Facebooks and console profiles full of abusive, vile, and intensely spiteful messages.

Because that’s the price of having an honest opinion, apparently.

All I try and do, and all my colleagues/friends try and do, is tell you what we think. We’re not telling you how to think, and we’re not so arrogant as to believe our opinions are absolute. We’re not making anybody come to our little blog against their own free will. We’re just one silly game blog of thousands, contributing our opinion. You can find dozens of Web sites that will cater to your belief system, and give all the games you like a high score. You can find loads of sites that will give games high scores based on how much hype or how high a budget they have. You tend not to get that here. It’s up to you if you’re comfortable with that.

I’m sorry I didn’t like Assassin’s Creed II, Final Fantasy XIII, or any of the other games I reviewed negatively. It’s not that I’m sorry I upset some readers, though. I’m sorry for the part of me that really wanted to like it. I wish I could be blown away by every game I ever play. What an awesome world that would be — if every game pleased every person, every minute of the day.

That’s not the world we live in, though. Get used to it, just like I got used to being told, daily, that somebody wishes I was dead and that my family would burn in Hell.

If being told that your favorite game isn’t perfect is the worst you have to deal with when you go online, I invite you to do my job for a few days.