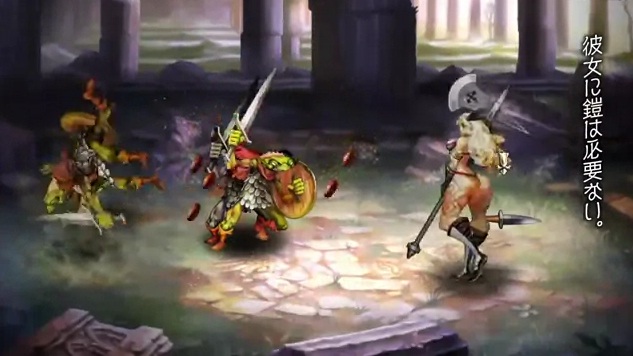 We’ve seen spots for Dragon’s Crown‘s Dwarf, Fighter, Wizard, Sorceress, and Elf, and now the time has come for the final character video — the Amazon. The Amazon looks to be a mix of the Elf, the Dwarf, and Fighter’s playstyles, with a combination of graceful aerial attacks and deliberate power.

On a dime, the Amazon seemingly goes from crushing, massive charge attacks to elaborate aerial raves, which makes her all the more enticing to play. If you look closely, you’ll see a barrier form around her in the middle of the video, which could mean a basic use of buffs may be at her disposal. From what I can tell, the Amazon looks to be a solid, balanced cornerstone in the party.

Dragon’s Crown is coming on August 6 in the US on the PlayStation 3 and Vita for $49.99 and $39.99, respectively — pre-ordering it will net you a sweet artbook. It will feature a cross-save function, but sadly, it won’t utilize cross-buy or even cross-play functionality.