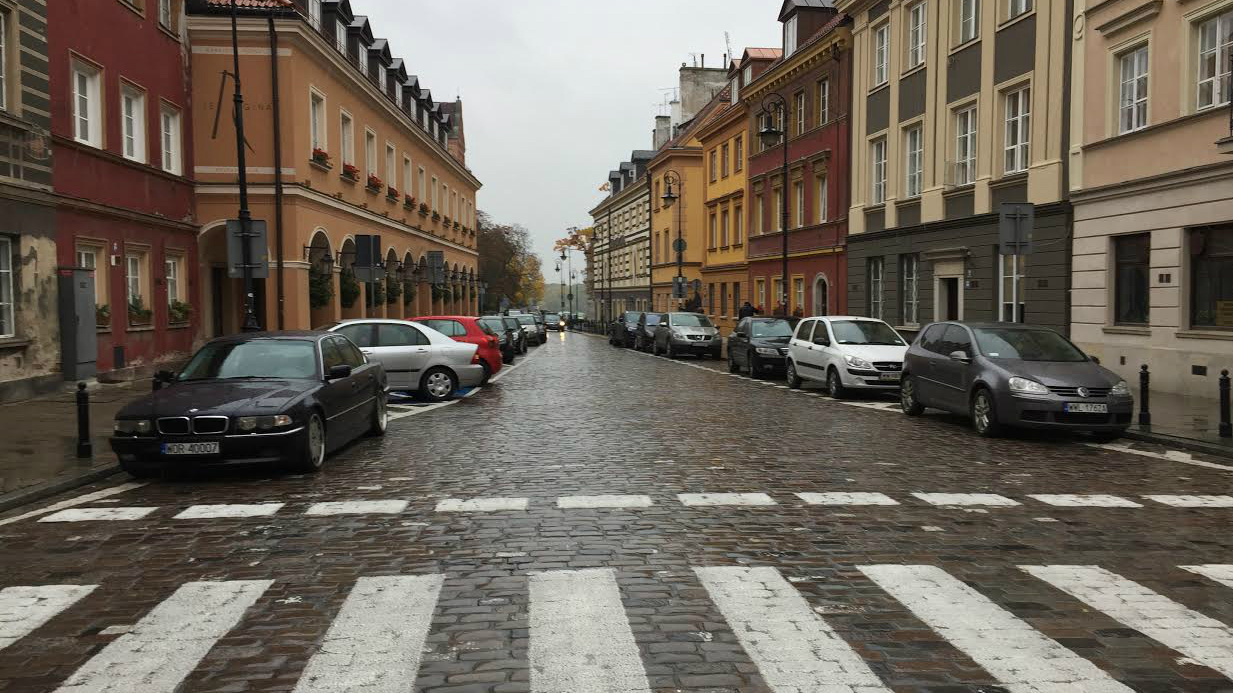 [Through the Polish Cultural Institute of New York City, Brett and I were flown to Poznań, Poland to attend Poznań Game Arena. We then took a train down to Warsaw to see 11 bit, CD Projekt Red, and Flying Wild Hog’s studios. I apologize for the photo quality; I was using my broken-ass cell phone.]

The game developers of Poland are warm, welcoming, and entirely too insistent on making you drink vodka until you can feel your heartbeat in your eyes. This stands in stark contrast to the older generation that we passed by every day on the street, who will only offer you the briefest of glances, often of the annoyed variety. As this was my first international trip, I found it odd to be simultaneously accepted and maligned by my hosts, and I assumed it was because Americans weren’t loved here.

Tadeusz Zielinski of Flying Wild Hog laughed at this while we ate breakfast at Poznan Game Arena: “It’s not because you’re American. It’s because you’re smiling. People don’t smile often in Poland. They immediately know you’re not from here, which leads to distrust.” I promised I’d try to stop smiling. “No, no!” he pleaded, “Please do it. We want this to change here. The younger people are happier, and we want that to win.” That’s an easy demand for me to follow, but I was curious as to why he thought people here didn’t trust others. “Communism, man! It only ended for us a little under thirty years ago. The older people on the streets lived in a time where your neighbor could be a spy. They still think with that mindset.”

Living in America, remembering only small bits and pieces of my history books, I hadn’t realized Poland’s time with Communism was so recent. After Zielinski told me about this, I couldn’t help stop thinking about it while we attended PGA. The people on the cold, damp streets that we walked through each day to reach the convention center didn’t match up with the smiling, enthusiastic faces we saw on both developers and attendees at the show.

Further highlighting the divide between the generations was PGA’s average age of attendance. The majority of attendees looked younger than twenty years old, and many were there with their parents. This was in no small way due to the cheap entry fee, which was under $10. In contrast to the United States’ gaming conventions that are generally industry-only or prohibitively expensive, it’s no wonder why the show skews so young. As a result, the atmosphere seemed more lively, like a festival instead of a trade show.

Brett and I found this especially true when we walked around to see what games we could cover. Out of the four main halls, one of them saw the majority of our coverage, as it was filled with indie games we had never heard of. The other halls were more focused on games that had already been released, gaming merchandise, or booths with people shouting for free swag.

The games themselves were that of a burgeoning development scene, eager to get its footing by taking elements from studios the world over. Serial Cleaner had elements of Hotline Miami. Die for Valhalla took copious notes from Castle Crashers. Agony looks like Amnesia and Doom had a real gross baby. We noticed time and again that these games had clear, obvious inspirations, but not in a way that felt exploitative at all.

I can’t help but wonder what the younger attendants are thinking when they’re walking around, surrounded by people from their homeland eking out a place in an industry they love. With huge successes like Shadow Warrior and especially The Witcher 3 made just a train ride away in Warsaw, they have heroes to look up to, and footsteps that they can follow. Ten years from now, I imagine Poland will be flooded with successful game developers, a force to be reckoned with.

Each time we sat down to play a new game, we faced overwhelming odds that there would only be a mouse and keyboard in front of us. Generally, American conventions are controller-focused. Being a PC guy, I was comfortable, even though I could tell Brett was having a bit of trouble. PC is the king here, and when an unrelated conversation led to ’90s consoles, Zielinski provided additional context for this. He told me that he remembered playing Genesis games, but official consoles weren’t accessible in Poland for a very long time. Black-market console equivalents were the best you could get. It didn’t take long for PC use to become widespread, though the PlayStation 4 is now common in the country. The Xbox One has found some footing, but he told me it wasn’t quite as successful.

When PGA ended, it was time for us to take a train down to rain-kissed Warsaw. After a ride through the countryside, we met up with Pawel Miechowski, senior writer of 11 bit Studios. He was our tour guide and accomplice, giving us history lessons and taking us to eat goose pierogi. Often, he’d reference that the buildings we were walking by were part of the “new Oldtown,” which threw Brett and I for a loop. When we asked for details, we were told that due to the brutal events of World War II, 90% of Warsaw had been razed to the ground. The loss of both human life and history didn’t end Poland’s persistent spirit; instead, they rebuilt from the ground up, ensuring to create buildings that looked like they had prior to the flames. This is why Warsaw’s often called the Phoenix City.

It lightly rained the entire time we were in Warsaw, and each developer I met was quick to apologize as if they were somehow responsible for the weather. Considering I live in Los Angeles, I was in heaven, and had to keep telling them I was happy. We first saw CD Projekt Red’s beautiful, modern studio as the team rushed to release Gwent‘s closed beta. The first few floors were similar to other high-end studios Brett and I had seen in America, but we were surprised to find one of the floors completely under construction for expansion of the team. We tried to sneak some Cyberpunk 2077 information, but CDPR wasn’t having it.

Next up was 11 bit’s studio. Since Pawel and his team were in the process of moving into a new building, it was sparsely furnished, with men using drills and hammers to provide the finishing touches. We were told vague details about Frostpunk and shown Beat Cop, all while eating Polish cookies that were covered with chocolate and filled with fruit preserves. Again, we listened to hopeful, excited developers, eager to share stories with a world that was increasingly receptive to hear from them. This kind of studio tour was comfortable, a far cry from the sterile visits and press appointments we sometimes attend.

Flying Wild Hog’s studio was about as comfortable as you can get. We were handed beers before exploring what looked like the lovechild of a dorm room and an office, inflatable wangs (penises, not the character from Shadow Warrior), and pictures of bare breasts on the walls. Brett told the rest of that story here. I was a little apprehensive at first about going to the studio since I had just reviewed Shadow Warrior 2 and gave it a 7 out of 10. While that’s a perfectly good score, and I think it’s a fun game, meeting a developer so soon after doling out criticism is a good recipe for awkward atmosphere.

Which leads me to Artur Maksara of Flying Wild Hog. I met him at a PGA dinner, where he looked at me through narrowed eyes and said “So…seven out of ten, eh?” and then grinned from ear to ear. He and the rest of the team were good-spirited the whole time, and we both made this joke time and again. They’d offer me a shot of vodka, watch me drink it, and then asked if I would give the flavor a 7 out of 10. I won’t forget that score or those jokes anytime soon.

Speaking of vodka, we were constantly reminded about Polish hospitality, also known as kindly encouraging people to drink themselves to death every single night. No matter how busy of a day we had, there was a party we were invited to. Without fail, when we saw developers the next day, they’d say “Ah! Good! You’re still alive! We can drink more tonight!” I suppose they have to stay warm somehow.

During our Flying Wild Hog tour, Artur kept alluding to a “surprise” that he had for me, Brett, and Andy Kelly from PC Gamer (a nice writerman that we met with in Warsaw). We were slightly afraid that he would open a door and offer us cocaine and invite us to a sword fight, but it was thankfully nothing of the sort. Instead we were invited to the launch of Vile Monarch’s Oh…Sir!! The Insult Simulator, since they shared the same building. It’s a shared Mad Libs type of game, where you build insults and try to combo them before attacking your opponent.

As the vodka was being passed around, Artur said he wanted to challenge me to the first round. It turns out that I wasn’t very good at the game. One of the phrases I strung together was “Your father/defeated/the Communists,” to which Vile Monarch founder Kacper Kwiatkowski replied “This isn’t supposed to be compliment simulator!” Artur mostly destroyed me, but I do have to say that I will always fondly remember the groans, cheers, and laughter elicited from the team when I put together “Your whole country/sucks at Overwatch/and it makes me sick.” I promise I didn’t mean it. I think I might love Poland, actually.

The atrocities Poland has endured have been wretched, but the people have never backed down. Yes, there’s a striation between the younger and older generations, but I’m confident that the optimism of the up-and-comers will win out. It won’t be long before the dated terms of West and East won’t be the only major factions in game development. Poland is here, and you should be watching them.