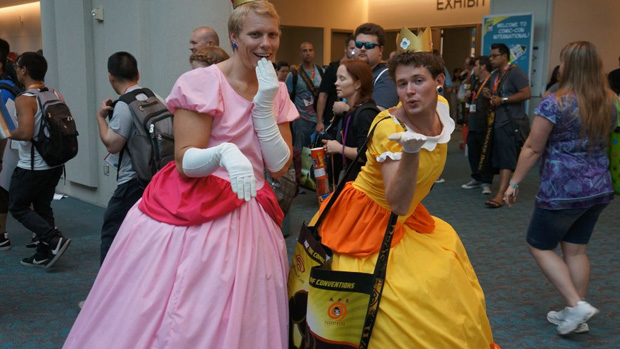 Definitely the hottest cosplayers of SDCC thus far. Those two know how to make the boys squeal!

Today, Hamza and Dale continue their onslaught of Comic-Con observations, Fraser Brown reviews Endless Space, Iwata tells us to “live with it” on the issue of 3DS XL’s lack of second nub, we catch a glimpse of the new PS3 redesign, WayForward’s Adventure Time: Hey Ice King! Why’d You Steal Our Garbage?! will have a kick-ass collector’s edition, and La-Mulana finally arrives in the US after far too long a wait.

Tara talks to the Design Producer of Borderlands 2

Ashly Burch is amazing as Tiny Tina in Borderlands 2

SDCC: Lots of videogame cosplay on day two of Comic-Con

SDCC: D-Arts Sigma and Terry Bogard figures are so ace

SDCC: Zone of the Enders HD is simply gorgeous

SDCC: Watch this heated cinematic from The Last of Us

Amazing Alex is out now on iOS and Android

Electronic Arts ‘investing quite a bit’ in always-on DRM

Mirror’s Edge sequel only a matter of time, says EA

Here come the fanboys! Link vs. Cloud in a Death Battle

Indie Game: The Movie is half price right now

Beyond: Two Souls images are devoted to Ellen Page

The journey is end, La-Mulana PC remake is out NOW