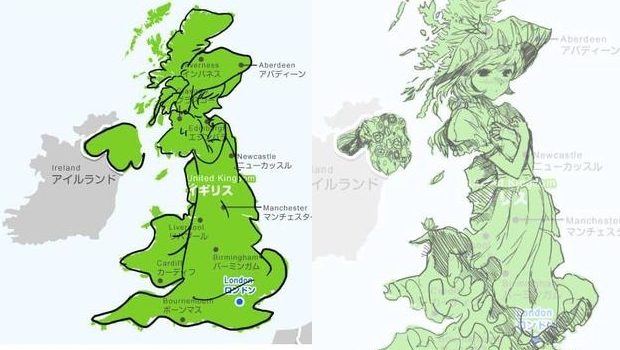 This is such a good thing and totally not creepy at all. It’s impressive, creative, artistic, and adorable. It’s like if finding shapes in clouds was multiplied by a factor of several thousand. Just one more reason I should learn how to art — to be able to discern awesome things from country outlines! Though, as an Italian, I feel a bit one-upped here. Someone want to render a chic stiletto over Italy for me?

Today, Jonathan Holmes talked to more women about videogames, a nice batch of previews went up, Maurice Tan reviewed Another World – 20th Anniversary, and you can enter a Dtoid-sponsored contest to win an assortment of meats!

Talking to Women about Videogames: Sexy vs. sexist?

TGS: The Vita got about 20% cooler

Forum thread of the day: Suikoden: The Woven Web of a Century

Fantastic Arcade: Serious Sam 3 may be the best one yet

I gotta believe! PaRappa could return on the Vita

A bunch of Dragon Quest X info has rolled in

This new Saints Row: The Third trailer is SAACK!

My corgi has been Simified! The Sims 3 Pets is coming

SI swimsuit models in Need for Speed The Run [trailer]

City of Heroes: Freedom is now live for everyone

Aquaria is heading to the iPad