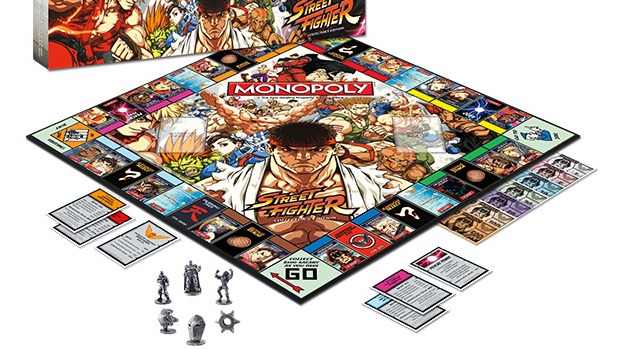 Earlier this year, we told you that USAopoly, the company that takes Parker Brothers games like Risk and Jenga and incorporates popular licenses like Spider-Man and The Simpson, was working on Monopoly: Street Fighter Collector’s Edition. Even though it was just released released a few days ago on Amazon, it’s already sold out with no indication of when new stock will arrive.

Should you be interested whenever it becomes available again, check out what the set offers. The board and box feature all-new exclusive artwork, and all the the locations have been renamed after stages from the series, such as Dan’s dojo and Shadaloo headquarters. The game pieces, selected by fan voting, include Ryu, Blanka, M. Bison, Vega’s mask, Chun-Li’s wrist cuff, and a Hadoken (I’ll have to take their word on that last one, because I honestly can’t tell what that thing is supposed to be).

But the best part is that the in-game economy deals in Bison dollars. Remember, every Bison dollar is worth five British pounds, so you’ll want to hold on to every bill!

Filed under... #Board Games#Capcom#Gallery#Offbeat#Street Fighter