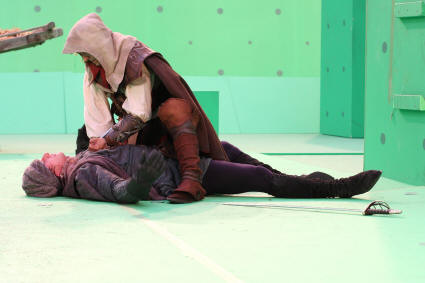 It’s 4 a.m. in the morning where I am, and if you’re up right now you’ve either just gotten home from a fantastic night and can’t even read these words, live in a place where the time is different or you have insomnia. If you’re in the latter group, I’ve got a way to kill another 35 minutes before the sun comes up. Above is the Assassin’s Creed short film, Assassin’s Creed: Lineage. It was originally released in three short segments, but now you can see it all from start to finish.

The film leads up to the beginning of Assassin’s Creed II, and chronicles Ezio’s father. It is surprisingly well done, with solid special effects, impressive fight scenes, good acting and a cliche “hero getting ready montage” in the opening. I was actually only planning on watching about five minutes of it and writing up this post, but found myself drawn into watching the entire thing and not even realizing how much time had passed. If this is the kind of time and attention Ubisoft put into a side project for the game, then the game itself should be way more kick ass then its repetitive predecessor.