Garbage men are so strong

Some kids want to be astronauts or doctors or lawyers or hedge fund managers. When I was a kid, I wanted to be a garbageman. Kid me is much brighter than real me. I’d probably be making three times more money annually, have health benefits, and a retirement plan.

And I’d have garbageman arms. Strong arms. Weathered and leathery. Not vein laced or ripped. Just thick. The sort of arms that could squeeze the life out of another human being if they needed to, but not with malice. With an exasperated sigh. With a rote understanding of doing what needs doing (and only if it did need doing). Forlorn, but with a stupid persistence for a lack of alternatives. 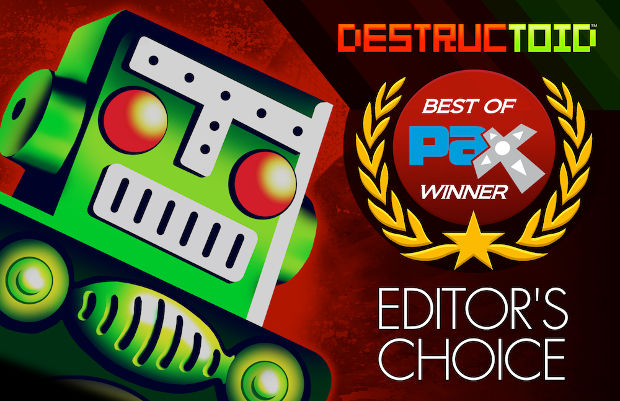 Despite an overall smaller show than in years past, PAX East still had a great amount of games worth seeing. A big reason for that was the Indie MEGABOOTH, a segment of the show that’s slowly getting bigger with each passing trade show. In fact, a majority of team Destructoid’s time was spent looking for gems to play there than anywhere else on the show floor. Here were our top ten games that everyone at the show needed to get their hands-on.

This week, we filmed a wonderful short piece in which Bill and I discussed the lack of video games that let us play as actual animals. Unfortunately, Bill’s microphone cut out mid-discussion, and the camera’s face-tracking started focusing on an animated GIF of some dogs having sex I had up on my monitor behind me.

So, here’s what we did instead.

n an effort to make myself relevant to teenagers everywhere, today’s episode of Farts ‘N’ Crafts combines Pokémon and Call of Duty: Ghosts. Am I relevant now, teens? Hm?

We had the creators of Hyper Light Drifter onto our live channel to talk about developing the game while we totally dissected the demo they showed at PAX East. Of course we’ve saved our conversation with the developers and our time with the survival mode of the game. Learn what the devs had to say about Hyper Light below.

This week on Hardline, I was joined by Steven “I hardly know her!” Hansen for a chat with Dale North and Brett Makedonski about the games they were able to play at PAX East. Below, Evolve, and Child of Light were among the frontrunners, and we spoke at length about Penny Arcade’s decision to open up yet another convention, PAX South, in San Antonio, Texas. Also, Dale talked trash about the Halo theme song. That jerk / hero!

Drink Box has a new game, Severed. I am excited. Tales from Space and Guacamelee! are great. Go watch the trailer.

The game is all gesture-based, and with combat it was likened to that of Infinity Blade in that you’ll be swiping to perform attacks. The Punch-Out element comes in on how all the enemies require different strategies, and that foes have different tells to make you aware of their incoming strikes or weaknesses. It’ll be interesting how difficult combat will become, as enemies can surround you yet you can only be facing one direction at a time. There will be something in place to make you aware there’s multiple enemies around you, and learning the tells of enemies will be key in these situations so you know who to strike at first.

There Came an Echo does voice control right – Darren Nakamura

Most impressive is the technology behind the voice control. Although There Came an Echo has several built-in commands, custom words can be used for characters or orders, and the system only requires typed words in order to parse them; no pre-recording is needed. Inside the sound booth, I unimaginatively nicknamed the main character Corrin as “Wil Wheaton,” and after only typing it in, the voice recognition picked up the command without any trouble.

Unlike with most fungi, I enjoyed Mushroom 11 growing on me – Darren Nakamura

All of the different parts come together fairly well, and they are all tied to the central destruction/regeneration mechanic. Keren seems to be full of ideas to implement, and while they may not all work in the end, Mushroom 11 looks like it will have some truly new and interesting gameplay.

Music-making game Cosmic DJ has a corgi in it! – Dale North

I was too busy laughing at flying dog heads and woofy beat drops at first, but once I got into the zone, I was making some pretty slick beats with Cosmic DJ. Again, it’s silly and totally open to players of any skill level, but if you know what you’re doing, Cosmic DJ can also be a pretty solid music making tool. And with its export tools your creation can be shared on Soundcloud. There are even tools to create your own album art!

Gods Will Be Watching stressed me the hell out – Patrick Hancock

You have to be an awesome juggler to succeed at Gods Will Be Watching. If you get too caught up with one thing, say, the hostages, another will come and bite you in the butt (like the SWAT team). Scenarios are very tense, making it very easy to lose concentration and blow an entire scenario. It’s also a game that will test players’ ethics and resolve, making it a game that’s also incredibly enjoyable to just watch and see how certain people react to certain scenarios.

How people break the game is going to be the most interesting aspect of Hack N Slash. Double Fine has gotten ahead of the issue, and displays an in-game message about crashing the game, which essentially warns the players to stop doing whatever it is they did. The game also keeps many backup save states in case players hack a situation that leaves the game unwinnable. The fact that these scenarios are even possible are a beautiful thing.

Aaru’s Awakening is all about movement – Patrick Hancock

The hand-drawn art of Aaru’s Awakening is beautiful in person. Most everything from the character designs to the environments were breathtaking. There were some background effects that I thought were stage hazards, however, which led to some unnecessary deaths. Some of the animations for enemies weren’t up to the standard of the rest of the art, either. It’s likely because these weren’t finished yet, or at least I hope that’s the case.

The structure for the remainder of the game will be similar to what was shown at PAX. Get to a new area, rescue bunnies, fight a constellation. There is room for exploration and perhaps some light puzzle solving, but at its core, Lovers in a Dangerous Spacetime seems to be built on the frenzied experience of having too many things to do and not enough people to do them.

Read the writing on the wall with Invisible, Inc. – Darren Nakamura

I overestimated how cunning, thoughtful, and sneaky I am. Invisible, Inc. requires proper espionage; players who run in and try to blow stuff up like James Bond will not make it far. Even those who play cautiously will often find themselves in sticky situations, outnumbered and outgunned with no hope for a clean exit.

I died an embarrassing amount in Hotline Miami 2 – Brett Makedonski

While there are multiple characters to play as, we don’t know why yet, as Dennaton isn’t talking much about the story. In fact, they weren’t even at the show; the member of Devolver Digital that demoed the game with me said they stayed home to keep working on the game, so I had no chance to try to squeeze anything out of them.

Struggling to survive in This War of Mine – Caitlin Cooke

This War of Mine was an interesting commentary, despite its depressing and difficult nature. The mechanics were a tad difficult to grasp at first, but once I got the hang of it I felt much more comfortable. I’m looking forward to seeing how it evolves before it’s released this year.

It only takes a few bullets to the chest to be defeated, so cover is key. Fortunately, buildings are rife with desks to duck behind and alcoves to sidle into. Enemies can use cover just as the player can, so even a simple one-on-one battle can turn into a cat-and-mouse game, in which each party is counting shots and waiting until the other reloads.

On today’s hard-hitting debut episode of Tuesday Newsday, we cover some of the highlights from PAX East, like Cult of the Wind, where you run around pretending to be an airplane, or Rain World, where you’re a big squishy slug-cat. Meanwhile Firaxis has announced Civilization: Beyond Earth, Titanfall reveals details on new DLC, and Evolve has a skill tree for its monster. Brett got to play Capy Games’ Below, which sounds incredible, and The Behemoth is teasing their next game. Oh, and this wolfman is gettin’ all randy.

As of April 6 it has surpassed 7 million sales. I guess Second Son was enough to keep it snowballing. Meanwhile, retail and digital software sales are at 20.5 million as of April 13, more than doubling since January’s 9.7 million mark.

Bungie’s composer Marty O’Donnell, who wrote Halo‘s iconic theme and had been working on the upcoming Destiny, has been fired from Bungie. O’Donnell tweeted, “I’m saddened to say that Bungie’s board of directors terminated me without cause on April 11, 2014.”

My little Oculus-chan can’t be this cute – Steven Hansen

At Unite Japan 2014, Oculus CEO Palmer Luckey joked that maybe Oculus needed an Oculus-chan following a presentation that featured Unity’s mascot, Unity-chan. Then, the internet took over. Developer Kenji Iguchi compiled some of the art the Japanese Rift community came up with. My new goal in life is to have my own personal anime mascot girl.