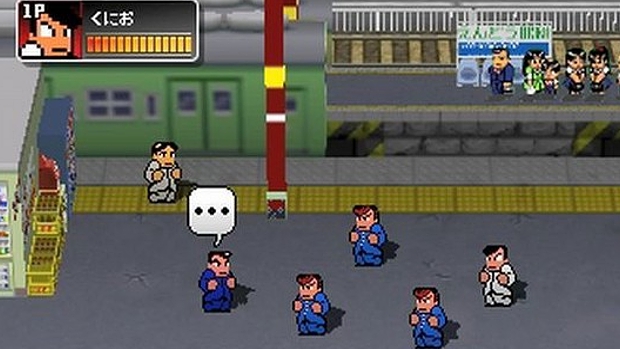 River City Ransom is often discussed as being an influential game or a game ahead of its time. It’s easy to forget that it’s also a really good game that holds up, despite its simple controls and modestly sized world.

It’s understandable then that some fans feared Arc System Works (Guilty Gear, BlazBlue) would muddy the series’ purity, but after getting some hands-on time with Hot-Blooded Tough Guy Kunio 3DS (Kunio-kun Supesharu) the new 3DS entry in the series I’m happy to say this couldn’t be further from the truth. Although I only got to play the game’s arcade mode, it retains the purity of the original.

Since I only played the arcade mode, it’s hard to say whether Hot Blooded Tough Guy for the 3DS is a remake of the original entry in the Kunio-kun series that its named after – otherwise known as Renegade in the States – or a new game in the franchise that shares its name. In either case, the game is styled after River City Ransom in both its visuals and combat.

In fact, it’d be difficult to distinguishes the game from its NES counter-part if it weren’t for the 3D perspective that separates the characters from the backdrops. The depth of field helps make the beat ‘em up action much easier to follow, especially with the addition of character’s shadows (something missing from previous series entries). Gauging a jump kick is much more manageable, as a result.

The Arcade Mode, lifted from the original Renegade, pits you in enclosed arenas against a horde of enemies. Beat them under 3 minutes and you move on to the next location and enemy set. The Kunio-kun series is known for its RPG and exploration elements, which are unfortunately not a part of Arcade mode. So, it’s hard to comment on what the finished game will offer, but I had fun with the back-to-basics approach to combat. The addition of a “pop-up book” meets 16-bit perspective is just a bonus.

The game is slated to come out soon in Japan, but there is no U.S. release date yet. Here’s hoping Arc System Works bring this old-school beat ’em up tribute overseas.