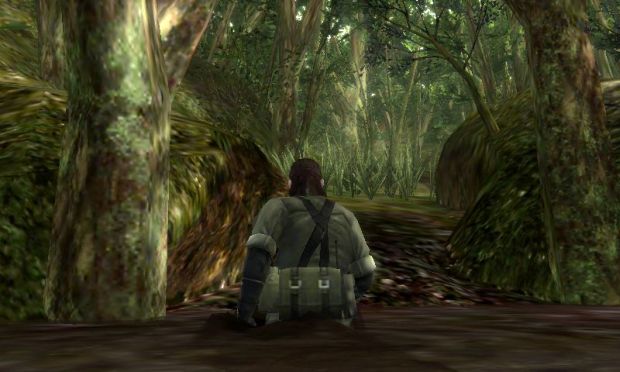 You know what had me the most excited for the 3DS when it was first announced? Metal Gear Solid: Snake Eater 3D. I skipped the game the first time around and was looking forward to eating snakes and stuff in 3D. Then the Metal Gear Solid HD Edition was announced. Well sh*t.

So while I have no interest in the 3DS version anymore, I can at least let you know that I enjoyed Snake Eater on the 3DS. Well for the most part.

I’m happy to say that the 3D visual effects are good. I mean really good. I am so sick of 3D at this point but I have to say I was impressed considering I’ve hated most 3D visuals that the 3DS has attempted thus far. It helps that the overall game itself looks extremely good on the handheld. Some of the best graphics to grace the system so far in my opinion.

The bad part of the 3D effects come into play when you have to look at the bottom screen. I felt like I was getting cross-eyed when I would go to from top screen to bottom screen each time I needed to access the menus, equipment and other items. All the HUD content is at least on the bottom screen leaving for an unobstructed view on the top screen.

Controls, while not horrible, also suffer a bit from the lack of a second analog nub. Sure, you can get the most amazing accessory ever invented to go twin stick, unless of course you’re one of those people that would rather eat railroad spikes than pay $15-ish dollars for something that should have been on the 3DS from the start (don’t even get me started on the need for batteries for that thing.)

So anyway, you’ll use the four face buttons to move the camera around, which if you’ve ever done that on any DS or PSP game before, then you know how much it slows down every aspect of a game whenever attempting anything. I kept over-correcting myself every time I moved the camera around Snake, for example.

Snake Eater will also make use of gyro controls for some sections (like moving the system right and left to tightrope walk over a rope bridge.) Then you have the photo-camouflage mode where you can use the 3DS camera to take a picture of anything and apply it as your camouflage.

Above you can see my camouflage for Snake, which is based on my arm. I was hoping for tan and black strips (Note: I’m really hairy) but it seems the photo-camouflage feature is limited to just one primary color. Also note that you have to stop the game and access the 3DS camera app in order to get new pictures. Otherwise you can simply access whatever is in your library already within the game to change camo colors.

So that’s Metal Gear Solid: Snake Eater 3D in a nutshell. Never have I seen such a conflicting situation when it comes to videogames. It’s good on the 3DS, but you know you’re going to have a much better time on the HD console ports.