From Software are some real, tough dudes. Not in that they can kick my ass (probably), but in that their game design philosophy and dedication to their craft make other developers look like complete pants-pissing wimps. They don’t give interviews, because they rather have the games speak for themselves. They don’t make easy and simple games, because they WANT to play hard and complex games.

I say all this because the opening 30 minutes of Dark Souls is as close to hand-holding as From Software have attempted. After awakening as a dead soul in a grim prison cell, the game throws you into a beginner’s tutorial that also serves as an initiation into the game’s relentless difficulty. What follows is a introduction to the controls (via written messages on the ground) and Dark Souls’ sh*t-hard difficulty (via dying a lot).

Although the game’s lengthy opening cinematic and cutscene lasts a little too long — killing the atmosphere rather than setting it up — once you enter the game’s world you feel familiarly uncomfortable in its mysterious, Gothic setting where either death or a new item awaits around the corner. Finding out which is half the fun, yet the new bonfire system (read: checkpoints) makes retreading ground much less of a hassle. 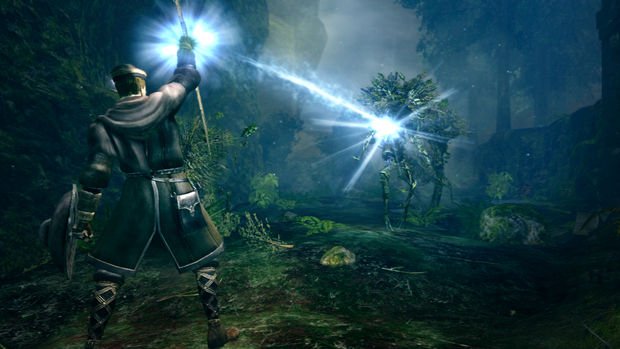 After killing a couple weaklings, you enter a small room with a boss designed to make players poop themselves inside out and immediately die. With nothing but a broken sword handle to fight with, you don’t stand a chance against him and must learn the first lesson of Dark Souls: Run like hell when you must. Shortly after, you are placed in the way of an oncoming boulder and a couple other horrid endeavors you’d expect out of any other game’s final hour, not its first.

The character creator is improved from the original but it is still limited. That being said, its still lovable mostly due to its quirks. Not unlike The Elder Scrolls IV: Oblivion, the game’s greatest challenge comes with making a hero that doesn’t look like an ass-troll. There are many options, but some highlights are the dark-skinned Pyromancer — who, for whatever reason, has a giant cartoon grin on his face, while all the light-skinned models have a frown — or a “Deprived”-class female character that can easily be mistaken for a starved meth addict. 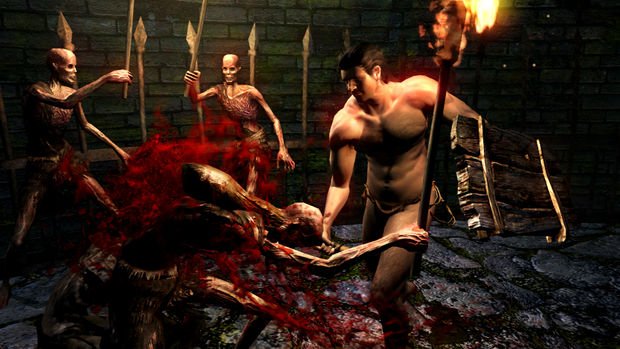 For those not keeping up with our Dark Souls updates, Deprived is the new class that lets players experience a new level of self-loathing by taking on the role of a character in a loin cloth with a wooden plank for a shield who has the attack damage of a level 1 rodent scurrying around the opening area of an MMORPG. In contrast, many of the returning classes have been rebuffed. The Knight and Warrior are no longer the default recommended class for newbies anymore.

In many ways, Dark Souls is the logical continuation of Demon’s Souls but it’s also an excellent place for new players to start. The opening tutorial, cinematic and bonfire system make the game much more welcoming to new players or players who felt a bit too bewildered by the original’s opening hour.

This being said, playing the first game definitely weakens the impact of Dark Souls’ surprises since most are just rehashes of scenarios from the first game. However, exploring the game’s world is the real appeal of Dark Souls, along with turning your weakling of an avatar into a “decent but still kind of useless” weakling of a survivor.

I can’t wait to be frustrated, frightened and fascinated with a From Software world again, come October 4.