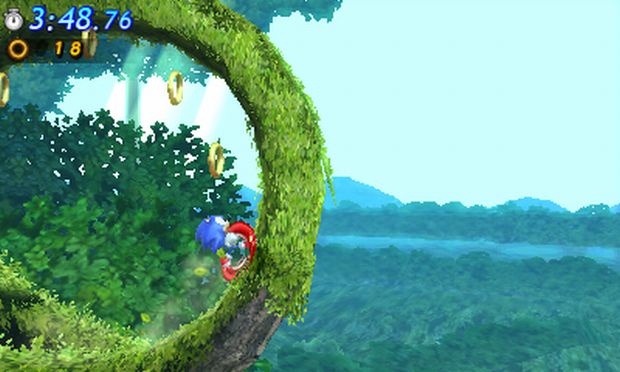 First things first: Sonic Generations is okay with the 3D on. Not the greatest, but doesn’t hurt your eyes. As for gameplay, it’s just like the big console versions. You run around and either you can do cool attacks with new Sonic or you’ll just simply be running around with old Sonic.

I checked out both Mushroom Hill Zones based on Sonic & Knuckles and the level was looking really pretty. No clue about the music, but I will flip tables over at Sega if the music isn’t like the one from the original Genesis games.

Lastly, I took on Dr. Robotnik in a boss fight as old Sonic. Not sure what was up with the battle, but it got to a point where there was no way I could defeat Robotnik. He kept swooping in low from right to left so I couldn’t run under him. And if I tried to jump over him, he would just grab me with his giant arms and shake me like a baby. I eventually gave up because of how broken the fight was.

Hopefully that is a known bug that gets fixed up ASAP. In other news, I have a giant urge to play Sonic & Knuckles all over again.