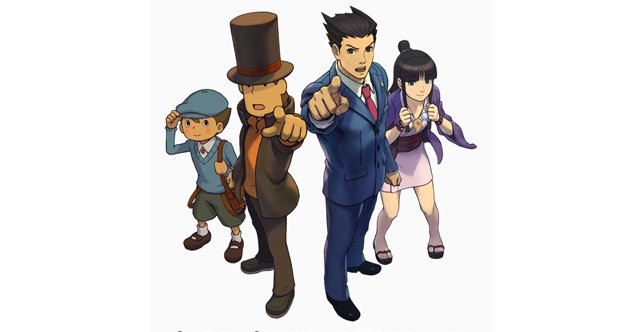 Professor Layton and Ace Attorney are unique within the puzzle/adventure genre, but both share enough in common with each other to make for a perfect crossover game. Not since Marvel vs. Capcom and Kingdom Hearts have dedicated fans (nerds) of two major franchises had something to collectively geek out about.

The slow-paced, narrative-driven puzzles, stylish atmosphere, and quirky characters of both games could be interchangeable. Level-5 and Capcom realize this and are trying to please fans of both franchises, but my time with the game left me wondering if this is one title bringing the two together or merely a two-game combo pack.

At the start of the demo, I was given the choice of choosing to play as Layton or Wright. I chose Layton which began with a gorgeously drawn animation sequence, improved with 3D and ruined by bad compression.

If you’ve played a Layton game, you know what to expect. A minor difference is that you now explore your environment via a cursor controlled by the thumbstick or stylus. I don’t really see why Level-5 thought this was necessary. I can see benefits to it, such as the magnifying glass cursor sparkling when you hover over a coin spot. I haven’t spent enough time with the game to feel one way or another. Maybe Level-5 just want to mix things up. In any case, it leaves the bottom screen in a sad empty state.

Visually, PLvAA is one of the sharpest games on the 3DS. Character portraits are now rendered in 3D but have a cartoon design and shading to them that makes them look 2D until they move. The backgrounds also look a lot better too thanks to a higher resolution and the 3DS’ depth-of-field. The UI is also overhauled with a pop-up menu for puzzle explanations that can easily be minimized and other good tweaks.

After getting stuck on a puzzle in Layton (it is in Japanese), I jumped into Ace Attorney. I should have known I’d be watching loads of animated video and dialog before getting into the game. I wasn’t able to check out the game thoroughly, but it seems pretty consistent with previous entries in the series. I’m not sure how it will connect to Layton’s story, beyond the witch trials that Wright takes part in.

Layton and Wright occupy the same world for this title, but between the demo and TGS trailer, I’m starting to get the feeling that we’ll rarely see them share screen space. Fans of both games will find much to enjoy here, but may be better off playing Ace Attorney 5 and/or Professor Layton and the Azran Legacy.

For a crossover, PLvAA doesn’t feel all that grand or ambitious. It’s more of a Neapolitan than an ice cream sundae, but if you happen to like all variety of flavors, it may be exactly what you are craving.