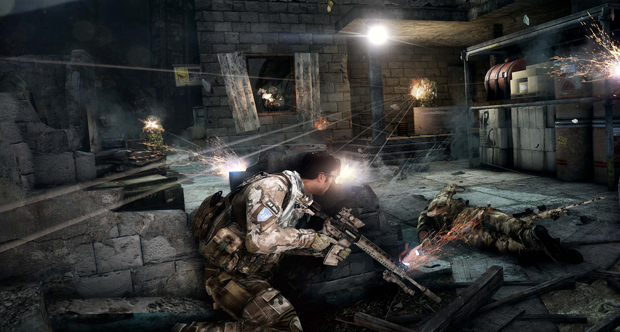 [Update: There are currently no plans for Wii U,]

I totally stood in line to play Medal of Honor: Warfighter at Tokyo Game Show just so I can tweet that I did so. The idea of playing the antithesis of TGS at TGS is just too great of an ironic, kitsch activity to pass up. However, I had a pretty good time with the demo, rediscovering what I liked about the original without being reminded of the not-so-awesome parts.

The single-player demo highlighted what set the original apart from Call of Duty. The areas are more open and your movement is more free thanks to the addition of sliding and leaning. Otherwise, it’s the same old cover-focused shooter with military bros screaming profanity into your ear. The game sounds okay but looked pretty bad on a PS3. The environments lacked detail and anti-aliasing. The demo was missing the set-piece moments you’d expect in this type of FPS, but there were plenty of cliches packed into five minutes: enemy ambushes, a missile strike scene, and a — WAIT FOR IT — turret sequence.

Warfighter lacks the high production values and swagger of Call of Duty, but I find it a lot more fun to play. I’m not foaming at the mouth for its release, but I can think of a lot worse first-person shooters you can spend your time with than this not-so-big-in-Japan title.