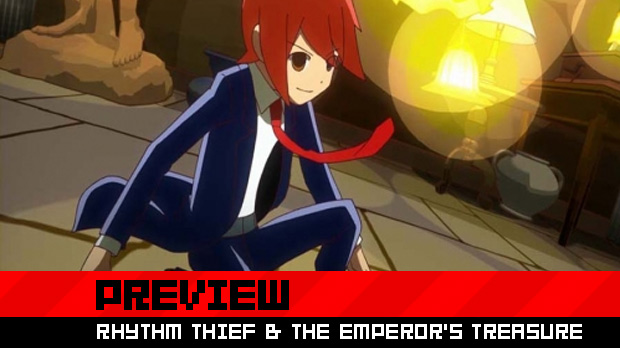 If you ask me what my favorite Nintendo DS games are, it won’t take me long until I bring up Elite Beat Agents and Professor Layton. Imagine my surprise when I discovered Rhythm Thief & the Emperor’s Treasure, a game for the 3DS that pretty much combines the two into a European-themed mystery with rhythm action driving the narrative.

The visuals are every bit as charming as Professor Layton; even though SEGA is copying Level-5, the quality of the art direction speaks for itself. Likewise, the gameplay wisely borrows concepts from a diverse amount of games to make a rhythm title that is a unique amalgamation of some of the best portable games of recent years.

In Rhythm Thief, you take on the role of Raphael: A master thief who is an even better dancer. Known for stealing renowned paintings in Paris, Raphael is an unlikely and mysterious protagonist. His own story is unwound alongside the larger narrative surrounding the rhythm mini-games. Much like Professor Layton, half the fun is progressing in order to get to the next great reveal.

While the first mini-game and general vibe of Rhythm Thief evokes the cult-hit Elite Beat Agents, the structure of the game is much more akin to Rhythm Heaven and Professor Layton. As you explore Paris, citizens and even pigeons will trigger a different rhythm game which can often be drastically different than the one before it.

The 20-minute TGS demo started up with a variation on Elite Beat Agents, where you swipe the stylus in the indicated direction in time with the beat. The other three games in the demo couldn’t be more different. They include gyroscope-exploiting “shake” mechanics, dodging sequences that resemble the classic NES title Punch-Out!!, and a simple “press a button to the beat” sequence that feels directly ripped from Rhythm Heaven.

Along with these two, there is also a game where you punch enemies to the beat via the d-pad and A-button. My favorite has to be the one you play as you sneak into a museum. In order to bypass the security guard, you must strike a pose in front of various statues. Each pose is linked to four buttons on the lower-screen, which is simple enough until the song speeds up. It’s the sort of game that is fun enough for a couple minutes, making you wish there was something more — and, thankfully, there is a lot more.

None of the four games are particularly deep or challenging, but they are all wonderfully realized with spectacular visuals and hummable melodies. As much of an upgrade as Rhythm Heaven Wii may be for that series, it can’t compare to this game. Seeing Rhythm Thief in motion is a real treat and the 3D depth-of-field just makes it even better.

What really has me sold on the game is its narrative and how elegantly its told. Well-produced animated cutscenes and chapters, that focus on different sub-plots and key moments, give the narrative momentum and cohesion. It’s like a great mystery novel wrapped around an adventure with a rhythm game spread all over it like buttered toast. As with Professor Layton, you can hunt around for coins — I’m not sure what you spend them on though (certainly not hints). You can also find secrets that will give you new items if you beat a brief mini-mini-game, such as a game of musical Simon Says.

From the aesthetic to the music, Rhythm Thief has me set on finally buying a 3DS. It really has that much potential. My only worry is that the game will be too easy, as I got an A on each rhythm game with no problems. However, the games in the demo were clearly taken from the opening tutorial which may explain this. Here’s hoping the game finds a way to add some challenge without making harder rehashes of levels like in Rhythm Heaven.

The best/worst thing about TGS this year is that it has convinced me that I finally have to shell out for a 3DS, and Rhythm Thief is to blame.