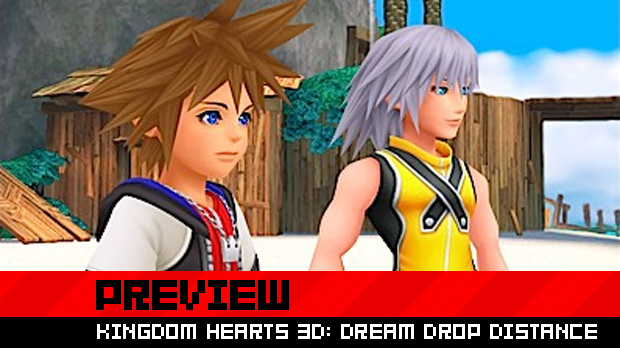 The console entries in the Kingdom Hearts series contain some fond memories for me (despite their flaws), but I’ve found the portable sequels to be a bit underwhelming. So much of the series’ appeal lays in exploring the world of Disney and characters of Square Enix — something that the limitations of the PSP and DS got in the way of. They just felt a little too miniature for their own good.

While I’d prefer a full-blown next-gen sequel, the graphical capabilities of the 3DS returns the visual flair of the series. Exploring the world of Kingdom Hearts has all the flair and Disney magic that has been missing from the series lately. Kingdom Hearts 3D: Dream Drop Distance resembles the greatness the series once achieved, even if it’s another portable sequel with a terrible subtitle.

The brief TGS demo showed off the game’s tweaked combat system and some new locations. The first portion of the demo has the player taking on the role of Sara, exploring Traverse Town (the first city in the original Kingdom Hearts). Since the demo was in Japanese, I can’t accurately explain the context of everything but you guys should know something very important: This game pairs you with a panda and a giant cat. I’m not sure why, but I’m completely fine with this. Ecstatic, actually.

Kingdom Hearts 3D introduces the new Social Link system which lets you turn your companions into powerful panda or cat beasts that deal out massive damage to enemies. While turning the panda into a spinning ballerina of death and projecting him via catapult is pretty neat, riding a giant bouncing cat might make this a day-one-purchase for me.

Another new addition to the series is the dash button that lets the player traverse quickly across the screen and jump up buildings like a ninja. You can also use light posts to swing on and off to get the drop on an enemy. I don’t think Kingdom Hearts needs to be any more manic, but, surprisingly, it works pretty well. It’s not exactly Ninja Gaiden, but the sense of speed and improved maneuverability give this entry a unique feel.

Exploring Notre Dame with Riku, during the demo’s second scenario, confirmed to me that Kingdom Hearts 3D may very well bring back the quality of the original console releases and make the series relevant to non-diehard fans again. We’ll have to wait until later next year to know for sure, although the game will come out in Japan in Spring — in case you want to get your fat bouncing cat on a bit early.