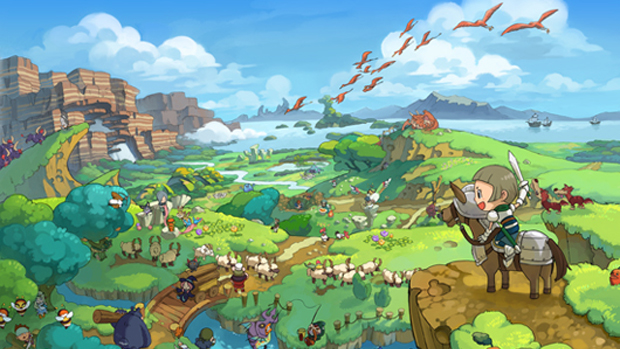 After three long years of development that started on the Nintendo DS, Fantasy Life will finally release on the 3DS on December 27 in Japan. Level-5 was a much different company when the game was first announced. It was a company focused on making great RPGs instead of adventure games — not that there is anything wrong with that. Along with Ni no Kuni, Fantasy Life looks to be another great return to form for the studio and one that will fill a much-needed niche in the 3DS’ library.

Disregard the underwhelming Animal Crossing wannabe called London Life, attached to Professor Layton and the Last Specter last fall. Fantasy Life is also co-developed by Brownie Brown (Mother 3) and built upon the idea of being a peasant instead of a hero, but it is a much deeper and action-based game.

Fantasy Life starts off with customizing your character by choosing their body, face, and occupation. It’s not the most in-depth customization to grace an RPG, but if you want a square jawline and white hair, you can do it! In the final release, you’ll be able to pick from many occupations, including postman, musician, and chef. The demo limited the class choice to solely a rather generic town guard role — not much of a choice at all, really. Oh well.

After a brief exchange with a knight in town, I received armor and a sword. Naturally, I head south and started bashing sheep with my new weaponry. The combat is standard fare for an overhead action-RPG but I rather liked it. You attack with A and defend with X. I enjoyed the emphasis on using your shield to block attacks. It gives the combat a much different pace and a — I know how out of place this is going to sound considering the cartoon aesthetic — but a Dark Souls vibe.

You also have a buddy that follows you around and helps you kill things. He’ll occasionally go down for the count, which summons a revive counter that lasts 20 seconds. What happens after those 20 seconds transpire, I don’t know (because I’m awesome at videogames!). You are given a lot of opportunities to use your buddy to distract an enemy, while you attack them from behind. For such a simple action-RPG, the combat has a bit of depth to it.

The game looks great! It’s like Animal Crossing and Professor Layton had a baby which Mother 3 then adopted and nursed to health. The bottom screen is used for a large map that makes it very easy to see where things are and where you have to go. If you have a basic understanding of Japanese, you may be able to enjoy an import copy. As with most Level-5 releases, the vocabulary is simple and there is furigana for the kanji which makes it easier to look up in a dictionary.

This brief and basic demo doesn’t offer an all-encompassing glimpse at Fantasy Life, but I enjoyed what I played of the game. The graphics, presentation, and combat are of the quality you’d expect from Level-5. The game comes out December 27 in Japan, but there is currently no release date for the US. This makes me very, very sad.