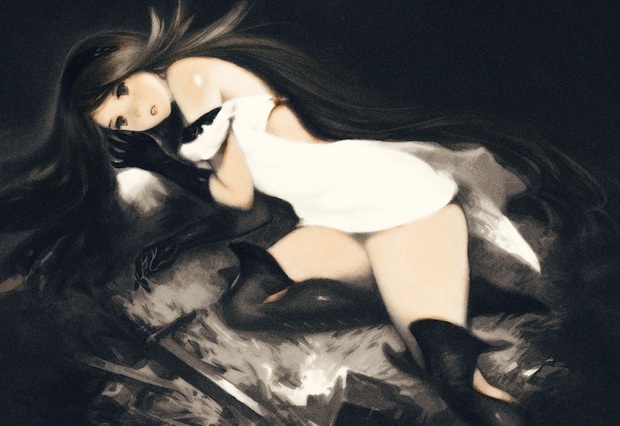 Bravely Default is not quite done yet, so Square Enix set up an AR experience at their Tokyo Game Show booth this week to show the title off. It seems like standard RPG demo fare at first, but it absolutely kills at the end. It left me with my jaw wide open. I almost don’t want to share the following screenshots with you as they do the game no justice. You must see this in person.

It starts out on a ship in the ocean, where the main character moves about for a bit before telling the player that an AR experience is coming up. Even in this short bit you could see how fine the visual quality of the game is. The characters are squatty like they are in Final Fantasy: The 4 Heroes of Light, but with way more going on in the polygon department. The sea/boat setting is lush and detailed, and a few quick glimpses of other settings, like the overworld and a bar, let me know that they’ve put a lot of work into the looks of this title.

Here’s where the magic starts: The TGS booth experience centered around an augmented reality card on the floor, placed in front of a sea and boat backdrop. When I pointed the 3DS at the AR marker on the floor a pendant appeared. It started to float upward in space, against the booth’s sea backdrop. The sparkle and light effects that accompanied this rising of the pendant were very pretty, not to mention impressive.

The movement of the pendant forced me to move the 3DS upward to follow it. When it reached eye level, the pendant exploded and a beautiful girl appeared. She was almost life-sized, with long black hair and a short white dress. Her face seemed to channel Final Fantasy IX‘s Princess Garnet a bit, but with softer features. Very pretty. I was able to move the 3DS around to look at her, moving the system from her head to toe to get a better look. The level of detail was stunning — I’ve never seen something so lovely come out of a 3DS screen. Seeing her move in such a lifelike fashion gave me goosebumps.

The girl moved around a bit as she was distressed. I had to follow her around with the 3DS to keep her in view. Suddenly she looked off behind me, over my shoulder and said something like “It came.” She collapses to the ground with fear, forcing me to pan the 3DS down to see her. As she stands back up the ground rumbles and roars, and she collapses again, calling out for you to help her. Then it ends.

How moving! This little tease was highly effective, so much so that I went around for the next hour insisting that others at the show check it out. I’ve never seen the 3DS pull of this quality of visual. On top of that, Square Enix is doing something really creative with augmented reality here. Bravely Default is definitely one to keep an eye out for. Look to hear more about the title next year.