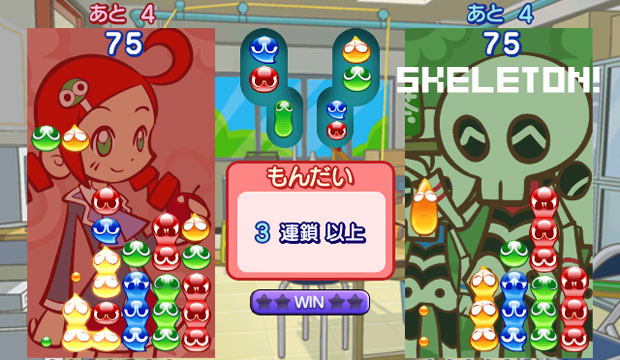 Skeletons. That’s how you start off a good morning. Bonus points if they happen to be part of a new version of the competitive action puzzler, Puyo Puyo. So what’s different this time around? In addition to being all sharp and sparkly, the press release says,

“It has the new main character ‘Ringo Ando’ and the new rule ‘Great Transformation.’ Players can enjoy Puyo battles under the new rule with the unprecedented worldview.”

Unfortunately, Mrs. Beedog is not present to translate that Engrish for us, but whatever that means, it translates to “New Puyo Puyo” for me, and that’s always a good thing. Apparently this new rule affects the size of the falling Puyos, allowing for even sicker cahin combos than the game already had before. Sounds delicious.

The DS version is alreay available in Japan, with the Wii and PSP ports following on November 26. The DS version supports up to 8 players, and the Wii and PSP versions will both support up to four. No word yet on a US release date, but there’s not a lot to localize here. I think we’ll be seeing this one soon enough.